The Most Expensive Street in Europe

Posted on June 8, 2012 by crowcanyonjournal

It’s called the Bahnhofstrasse and it runs for about a mile from Zurich’s central train station to the docks on Lake Zurich.  It’s also the third most expensive street in the world (based on the cost to rent) behind New York’s 5th Avenue and Hong Kong’s Causeway Bay.

It rained all day on Wednesday, our first day in Switzerland; so when we noticed the sun shining on Thursday morning we quickly hopped on the hotel shuttle to the airport / train station and jumped on the first train to Zurich. Less than ten minutes later we got off at the first stop and walked out of the Zurich train station and onto the Bahnhofstrasse, the first leg of our walk around Zurich.

Alfred Escher monument in front of the Zurich Train Station. Escher was a 19th century politician who championed the national network of railways in Switzerland. He was also the chairman of Credit Suisse for more than 20 years.

It takes about 20 minutes to walk from the train station to the lake unless you dawdle. We dawdled. And we passed more than 100 luxury stores and shops and cafes. No, we didn’t come to this street to purchase any fancy watches or luxurious clothing. We only window-shopped on this (the west) side of the Limmat River, saving our money for less expensive souvenirs on the east side of the river.

We saw lots of pedestrians on this street dodging the constant blue-and-white trams cruising down the middle of the street. Signs of the latest in fashion were everywhere. We passed the Pestalozzi Park where a giant Bali ad on the Globus department store loomed over the statue of Johann Heinrich Pestalozzi, an educational reformer who is credited with eradicating illiteracy in Switzerland. 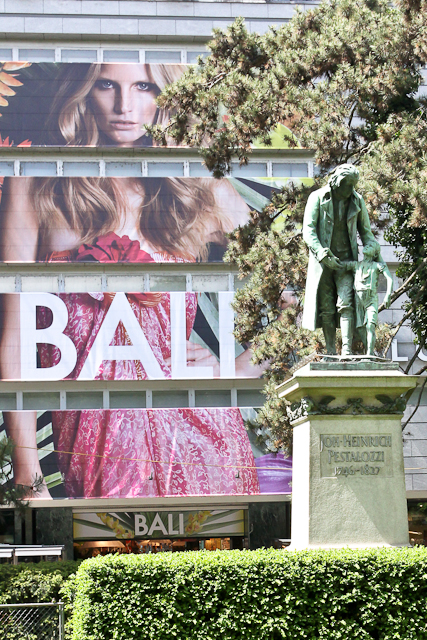 The Bali ad and the Pestalozzi statue

We also encountered quite a few enticing little squares and courtyards just off the Bahnhofstrasse and of course we had to explore some of these and so it took more than an hour before we reached the lake.

A square just off the Bahnhofstrasse

One of the hidden courtyards we explored

We even took a few minutes to visit a small church (St Augustine’s — an “Old Catholic” church that allows ordination of women and does not accept the infallibility of the Pope) that was ensconced near one of these charming squares.

About a block before the lake we came to a large square called the Paradeplatz, the home of Switzerland’s largest banks, including UBS and Credit Suisse.  Rumors abound about the billions in gold that are locked away in vaults below the magnificent bank buildings. 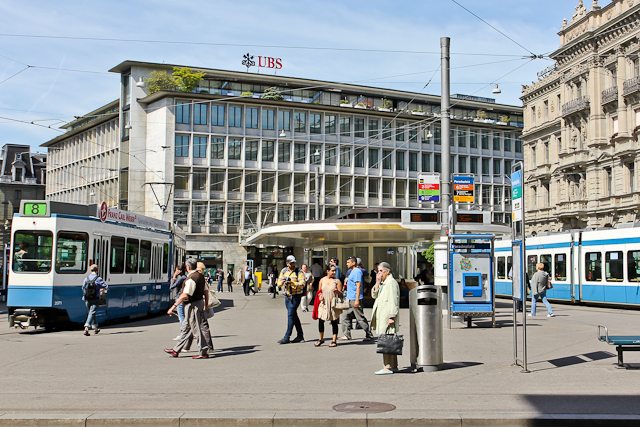 Paradeplatz and the headquarters of UBS, the largest bank in Switzerland. The Credit Suisse building is on the right.

There’s a nice park at the end of the Bahnhofstrasse. You can then cross the street to board a ship that cruises down Lake Zurich (the locals call it Zurichsee ).  We stopped at the famous statue of Ganymede and Zeus and, facing the lake, gazed at the mighty Alps stretching to the sky.

Monument in the park at the end of Bahnhofstrasse

At the end of the Bahnhofstrasse you can board a ship and cruise around Lake Zurich. 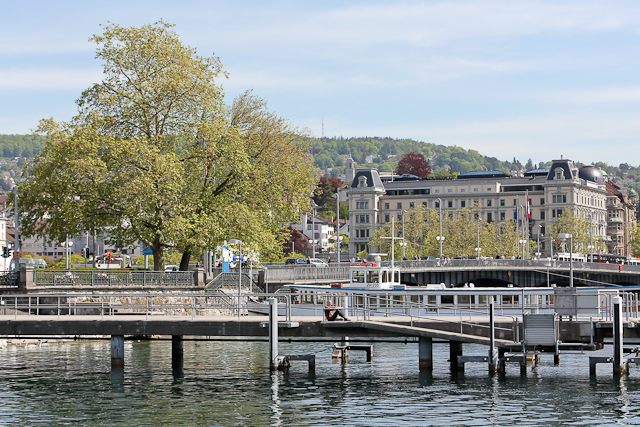 The Limmat River flows out of Lake Zurich at this bridge.

Lake Zurich and the mighty Alps

Ganymede and Zeus the eagle and me

During the the next couple of days I will write about the rest of our walk which was mostly on the east side of the Limmat River but we went back and forth across most of the Old Town bridges until we found ourselves back at the train station and the beginning of Bahnhofstrasse.

On the train back to the airport and our hotel we talked about our day and agreed that Zurich is pretty but expensive, just like its most famous street.

I am a family man with interests in family history, photography, history and travel.
View all posts by crowcanyonjournal →
This entry was posted in Switzerland, Travel and tagged Bahnhofstrasse, Lake Zurich, photography, Switzerland, travel, travel photography, Zurich. Bookmark the permalink.

5 Responses to The Most Expensive Street in Europe