Sight-seeing Lucerne in less than an hour

Posted on June 25, 2012 by crowcanyonjournal

[This is my second posting on our all-day bus trip from Zurich to Lucerne and Mt Titlis on May 11, 2012. See The Road to Lucerne for my first posting.]

Our first stop in Lucerne was at a little park just off the Lowenplatz. We came to see a dying lion carved right into the cliff above a small pond. Our guide narrated the story of how the sculpture is a memorial to the nearly 800 members of the Swiss Guard who were killed in 1792 trying to protect the French Royal Family from a Parisian mob. 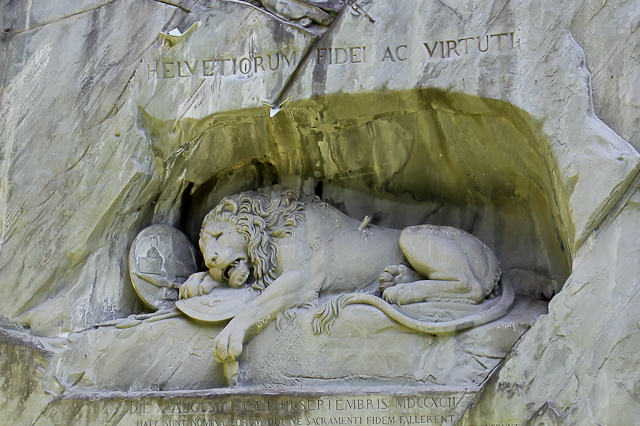 Lucerne’s Lion Monument honors the Swiss Guard who were killed during the French Revolution.

We then climbed back in the bus for a short ride to a spot in the old town about two blocks from the river. Here we were told that we had 45 minutes to explore old town Lucerne on our own before reconvening for our trip to the Engelberg Valley and Mt Titlis.

So we strolled a couple of blocks to the Reuss River, window-shopping along the way. Our first visit was to the Jesuit Church, a grand baroque structure of the 17th century. Then we crossed the famous Chapel Bridge nearby. And that was it! We had used up 35 of our allocated 45 minutes. So we strolled back to the bus. Goodbye Lucerne.

Our bus parked near this fountain.

On our walk to the river.

The Chapel Bridge was built in the 14th century. 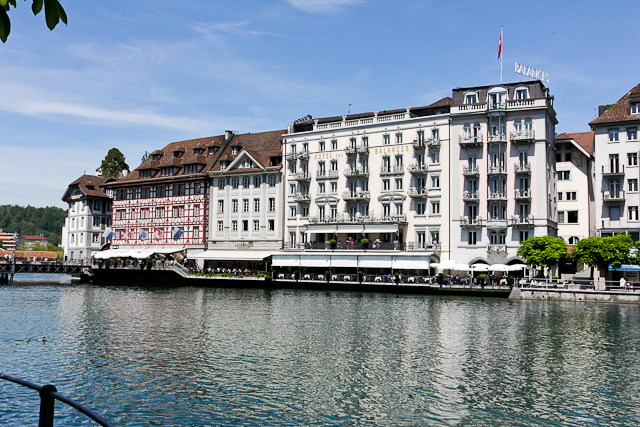 View across the river from the Jesuit Church. 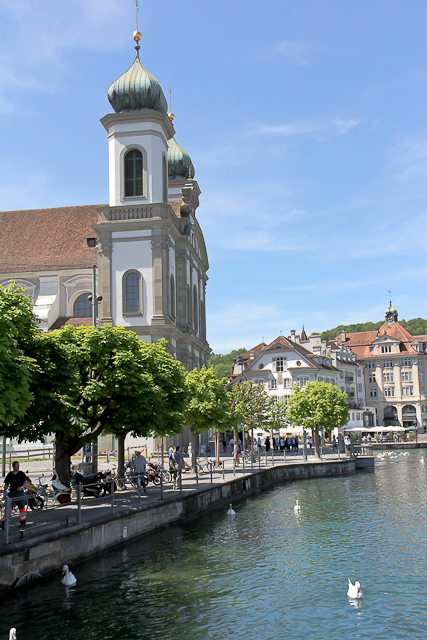 The Jesuit Church from the Chapel Bridge.

The east side of the river — where the Chapel Bridge ends. 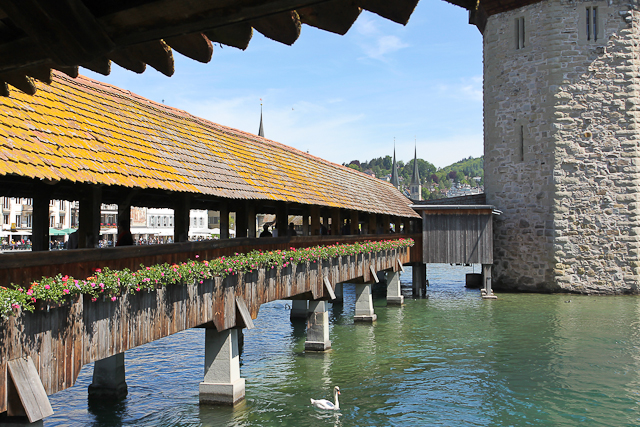 The Chapel Bridge zigzags across the river.

One of many panels under the covered wooden bridge.

The view southwest of the bridge. 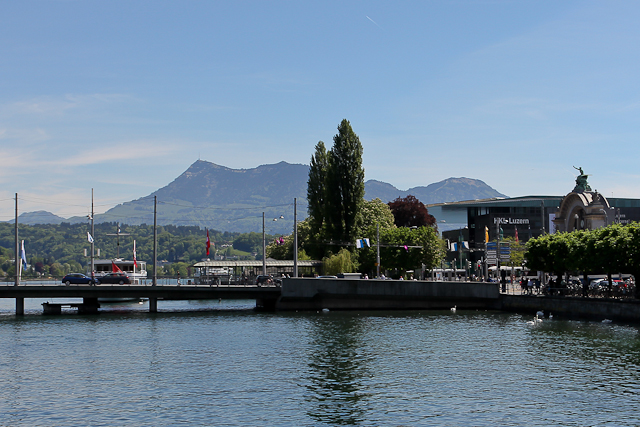 The view south of the bridge toward the lake.

Another of the panels that depict the history of Lucerne.

We passed this statue on our way back to the bus.

About a block from our bus.

As we waited for some of the stragglers to make their way back to the bus, we began comparing Lucerne to Zurich and saw many similarities. Both cities have their own cantons  in the German-speaking part of Switzerland. Both are built on the shores of beautiful lakes. Both have rivers running through picturesque old towns.

Now that our vacation is over we have spent some time noting some of the differences between the two cities.  Zurich is the largest city in Switzerland with a population of 376,000 and a metropolitan population of 1.4 million. Lucerne’s population is only 76,000 with 250,000 in its metropolitan area.  Zurich is 30 miles from the Alps. Lucerne is in the Alps. Zurich has the hustle and bustle of any big European city and was by far the most expensive place we visited on our five-country tour. We walked around old town Zurich for almost six hours on the day before we went to Lucerne and had a good time. But we have no desire to go back. The bucket list item has been marked off and we’re moving on. Not so with Lucerne: our visit was just too short.

So how do you sight-see Lucerne in less than an hour? Well, you can’t. If we ever go back to Switzerland on one of our three-week vacations I would like to spend the entire three weeks in Lucerne and walk all over the old town, visit some of its museums (churches, too, of course), cruise on a paddle steamer around the lake, take in a William Tell re-enactment in a lakeside village, attend a couple of concerts during Lucerne’s annual music festival, hike along some of the mountain trails, see the views from the tops of Mt Pilatus and Mt Rigi, and spend a few days just relaxing by the lake.

We didn’t buy anything during our brief stay in Lucerne; so we don’t have a real handle on how expensive it is there. From the prices we saw when we were window-shopping, however, and the prices some of the 4 and 5 star hotel rooms are going for on the Internet (yikes!), I’d say that Lucerne is almost as expensive as Zurich. We might have to cut that three-week vacation down to two! 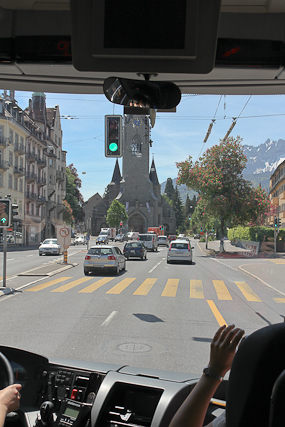 Back on the bus. We drove through town on our way to the Engelberg Valley.

With the stragglers finally in tow, our tour continued through town and the mountainous countryside. It took about 45 minutes to get to the Engelberg Valley about 16 miles south of Lucerne. My next posting will cover our trip to the top of the world. Well, maybe not the world. How about the top of the central Alps?

3 Responses to Sight-seeing Lucerne in less than an hour