Posted on August 6, 2012 by crowcanyonjournal

On Tuesday afternoon, May 15th,  my wife and I split up for the first and only time during the cruise. I decided to go on the bus for the History and Castle Ruins tour while Bee joined the shoppers of Hauptstrasse, the mile-long pedestrian street in Heidelberg’s Old Town.

We had an interesting tour guide, a professor at the University of Heidelberg, and I don’t think he stopped talking from the moment we stepped onto the bus until the end of the tour a few hours later. He had a lot of stories to tell and I’m sure some of them were true. But a lot of them were whoppers. Maybe the game was to try and figure out which ones were true and which ones weren’t!

We passed the Patton Barracks on the way to Heidelberg and we learned that the American military spared Heidelberg from bombing because Eisenhower’s ancestors came from a town in the Neckar Valley not too far away and for this reason he decided to make Heidelberg the headquarters once the war was over. Well, this story and many like it have been told for years but the real reason Heidelberg was never bombed is that it was just a simple, non-industrial college town and appeared to be no threat to the Allied forces. The industrial complex of Mannheim,  not too far away on the Rhine, however, was blown to smithereens because it was considered to be a military threat. And Heidelberg was chosen to be the headquarters for the US Army in Europe primarily because of the logistical convenience provided by the major autobahn and railroads nearby.

We were greeted by showers when we arrived at Heidelberg Castle (Heidelberger Schloss)  and the rain was off and on throughout the tour. There were occasions when the sun would creep out between the clouds for a few minutes at a time and we would rush to the various viewpoints to take pictures of either the Neckar River and the town below us or the various buildings, mostly in ruins,  that made up the castle in front of us.  A small part of the tour was indoors where we examined the world’s largest wine barrel and at the end of the tour we visited The Church of the Holy Ghost on the Hauptstrasse Market Square. Otherwise we were outdoors. 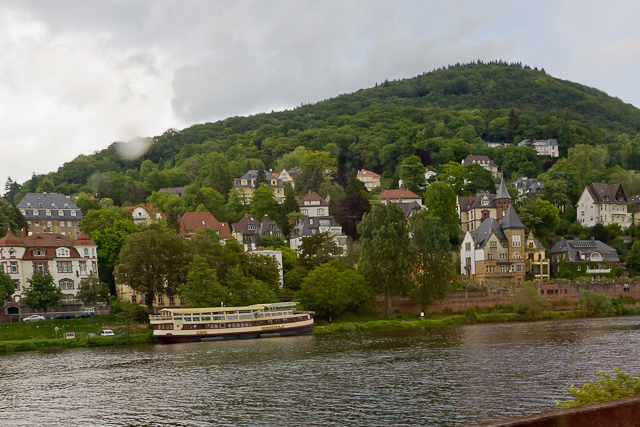 Approaching Heidelberg. This view is across the Neckar river from the main part of town. 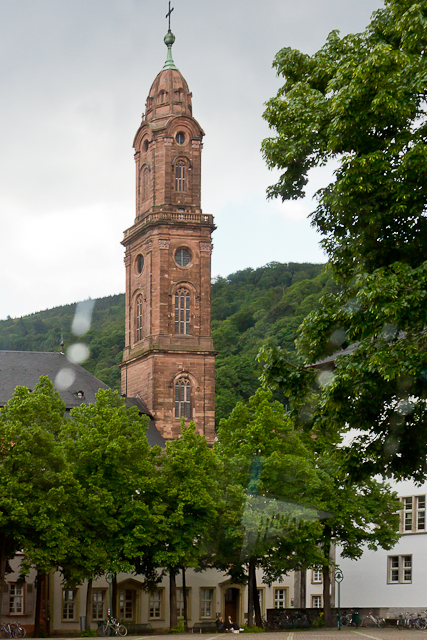 The spire of the Jesuit Church in old town Heidelberg. 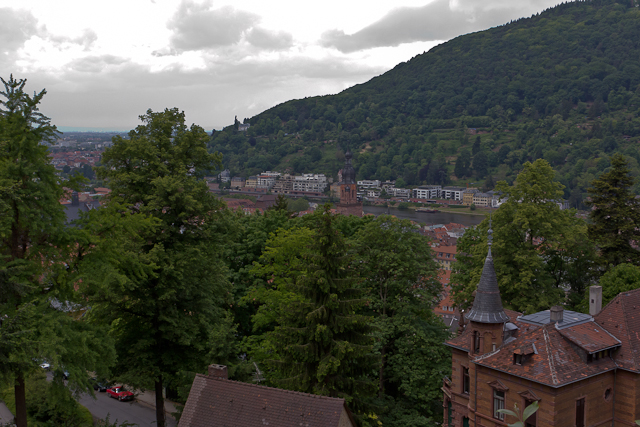 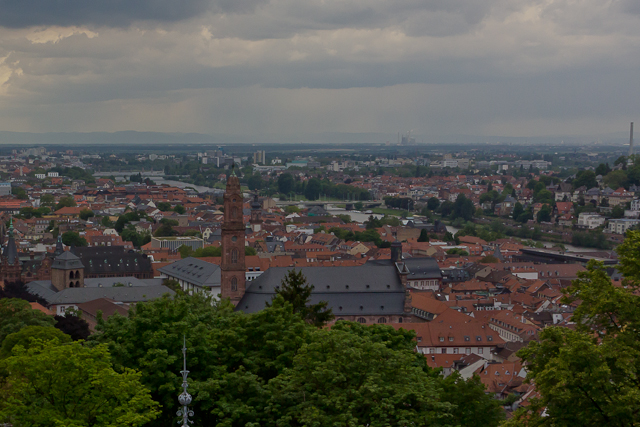 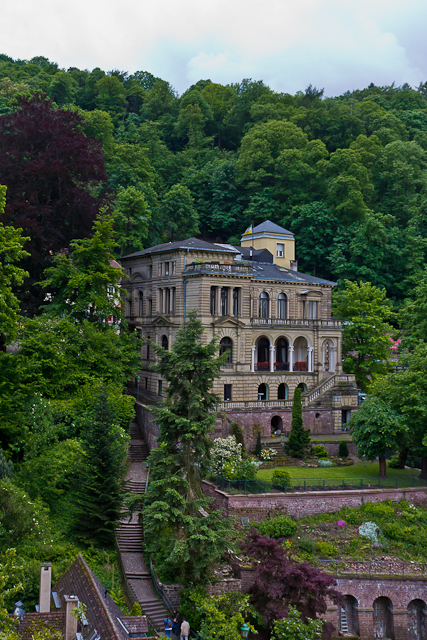 Mansion west of the Castle.

We heard that Heidelberg Castle was first built around 1300.  And in the early 1600s The Palatinate Elector Prince Frederick V built many additions to the castle, including its beautiful gardens for his English bride, the princess Elizabeth Stuart. And we heard how Louis XIV of France came to Heidelberg in 1688 and left the castle in ruins a year later.  A few years later the French came back and destroyed the entire town of Heidelberg. But then in the early 1700s the citizens of the town decided to rebuild and so we have the beautiful town before us today: all the buildings were built at the same time and in the same baroque architecture of the day, sometimes at the expense of the ruined castle whose stones were used for many of the new buildings.  Every now and then there would be an attempt to restore portions of the castle but in 1784 the castle was further destroyed by lightning and it was then decided to abandon any further plans to rebuild. 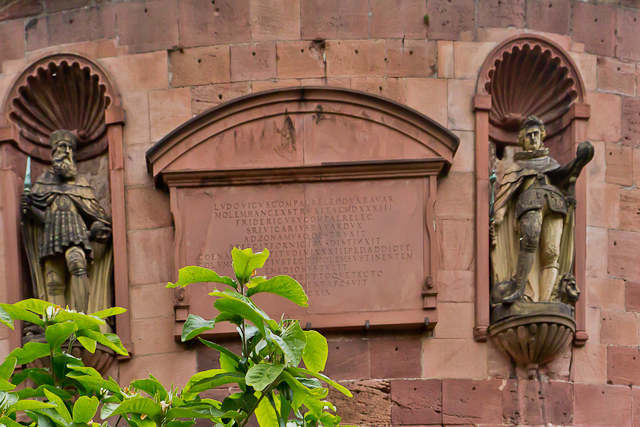 Detail, Thick Tower. That’s Ludwig V on the left and Friedrich V on the right. Both rulers took part in the building of the Castle. 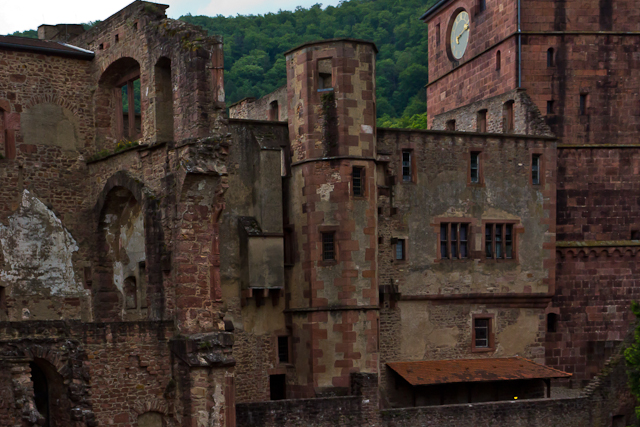 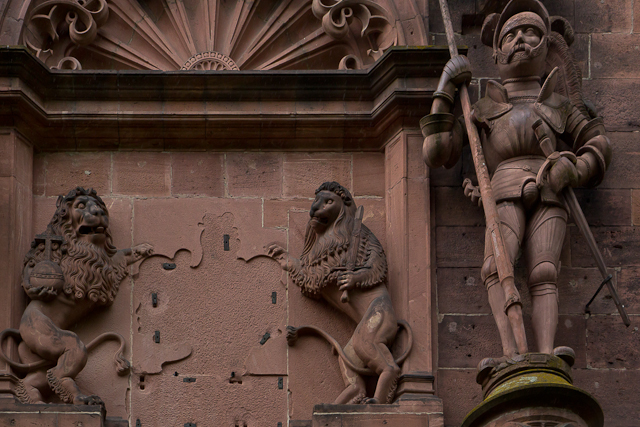 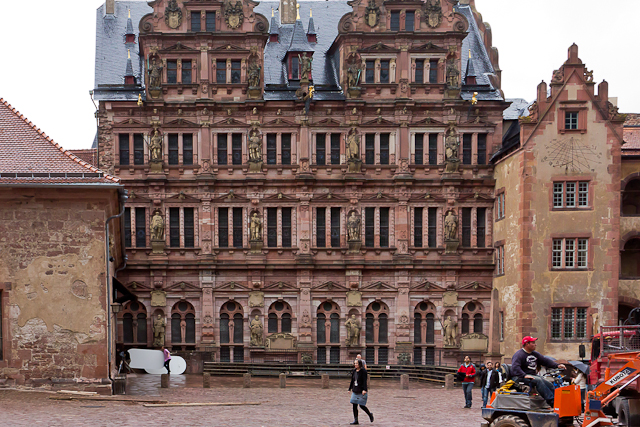 The Friedrich building was built in 1604 and restored in the early 20th century. 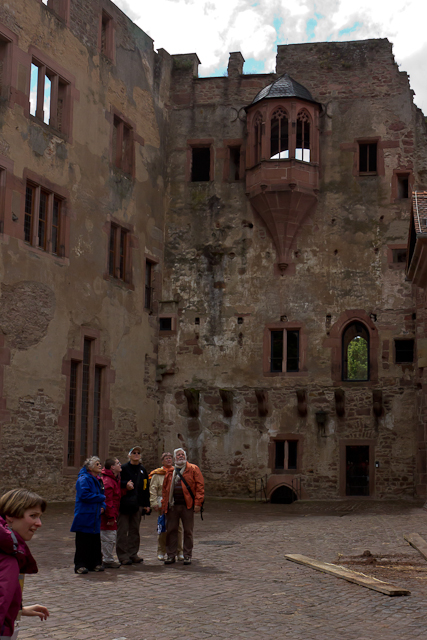 The wonder of it all. 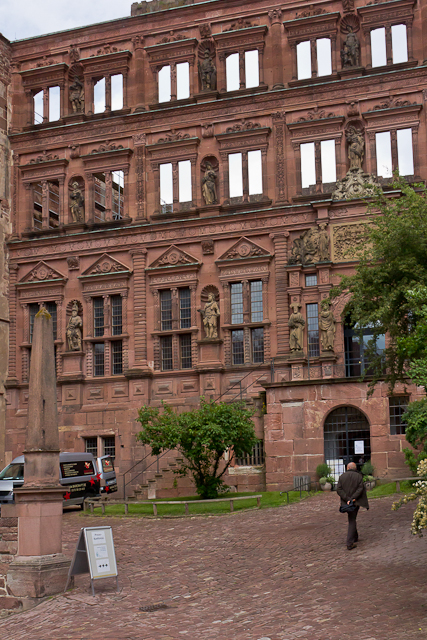 Our guide also covered the role Heidelberg played in the romantic Germany of the 19th century when poets, artists and philosophers flocked to the area. And he talked a lot about  Mark Twain who visited the town in 1878 and wrote about his visit in A Tramp Abroad. Both the German artists and Mark Twain claimed that the Castle was more beautiful because it was in ruins! The English artist J. M. W. Turner, however, preferred to paint an ideal castle with no ruins whatsoever. He also placed his castle higher up on the hill, further away from the town. 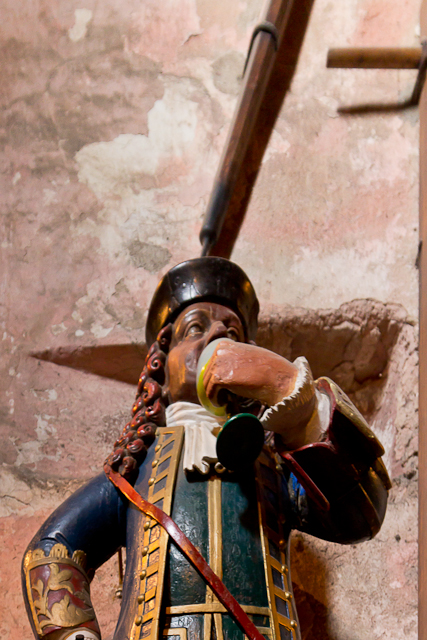 The famous dwarf Perkeo guards the world’s largest wine vat. There is a legend that he drank a glass of water by mistake one day and died. 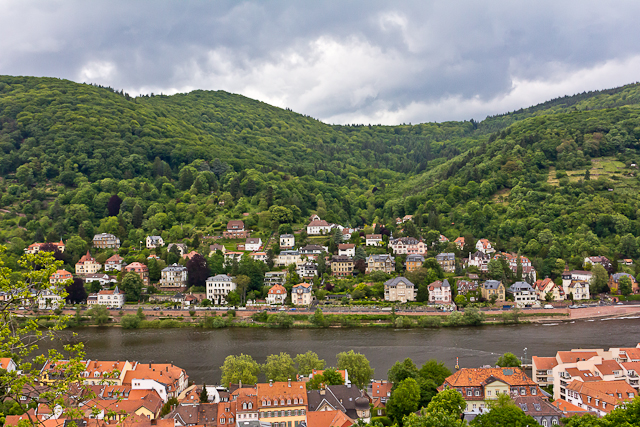 Most of the mansions across the river are fraternity houses sponsored by large corporations. 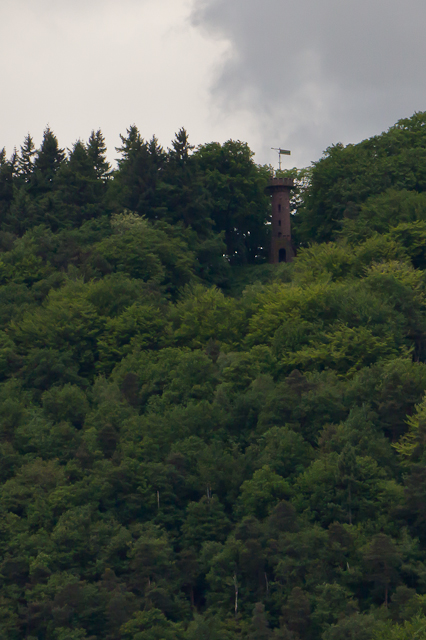 Tower on the hill across the river. 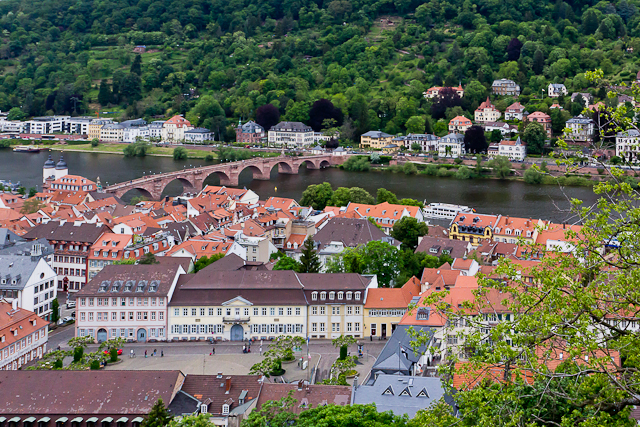 The Corn Market from the Castle with the Old Bridge in the background. 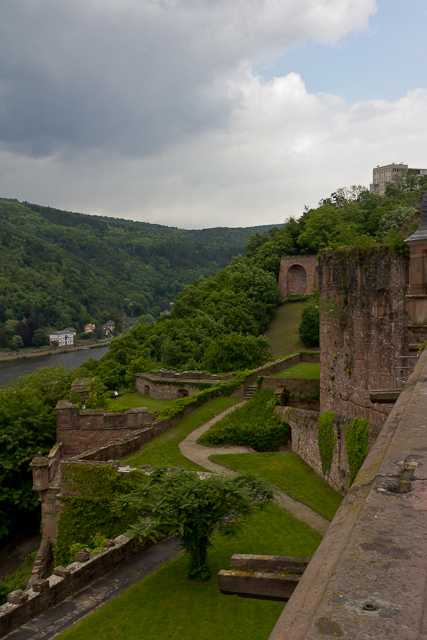 The park around the Castle. 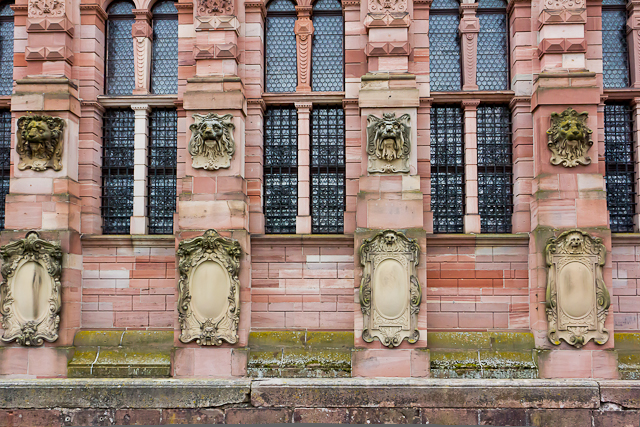 Detail of one of the palaces in the Castle. 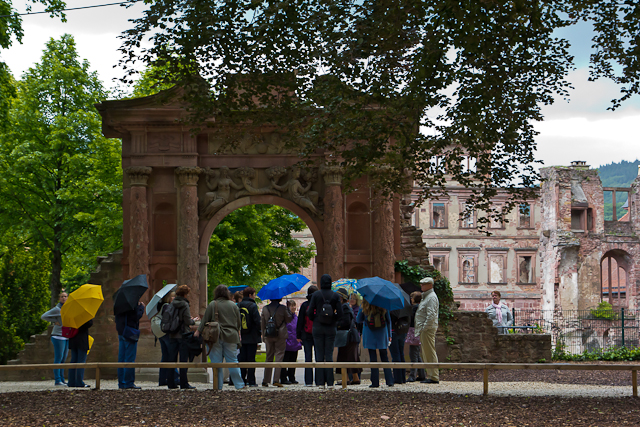 We also heard the story of how Queen Victoria was born on a boat on the Neckar River. “It’s  the truth,” our guide told us, “Though you will never find this written in any British history book!”

The cable car that connects the castle with the town below was not working on the day of our tour and so we walked down to town, gazed back at the Castle from the Corn Market and visited the Church of the Holy Ghost (Heiliggeistkirche). I found the history of this church very interesting. Sometimes it was Catholic and sometimes it was Protestant. And there was a time when a wall was built to separate the choir from the rest of the church so that both Catholics and Protestants could worship at the same place. The wall was taken down early in the 20th century and the church is now fully Protestant. 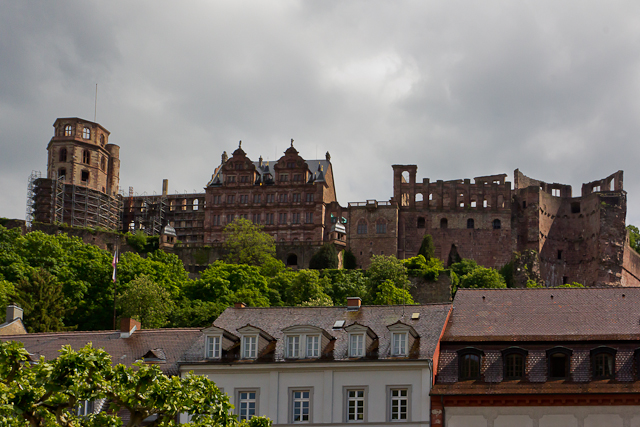 The Castle looms over the Corn Market on Hauptstrasse. 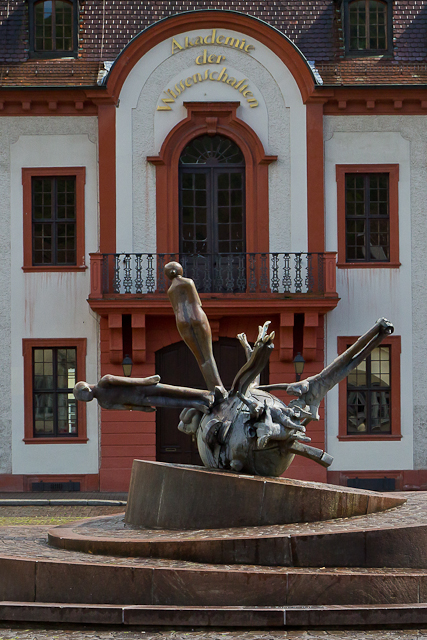 Statue and fountain in the Corn Market. 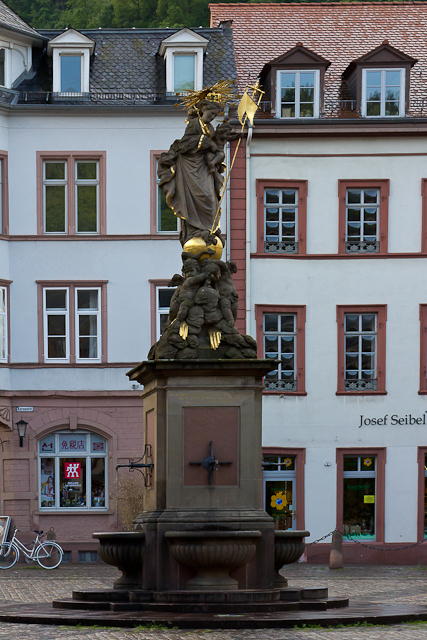 The Madonna statue in the Corn Market. 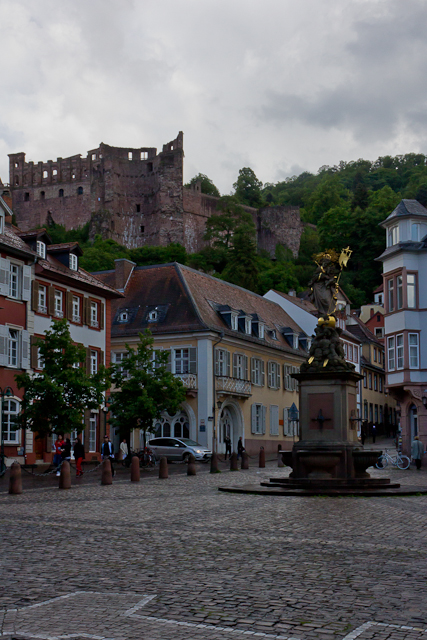 The Castle and the Madonna in the Corn Market. 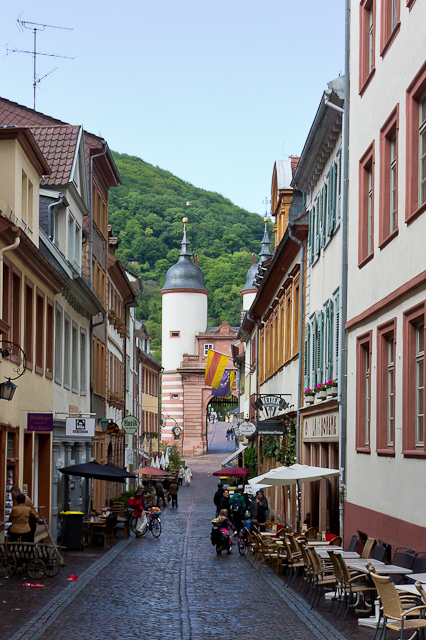 The Gate to the Old Bridge. Our tour guide took us down to the river to show us where our buses were parked and then we climbed back up the hill to visit the Church of the Holy Ghost. 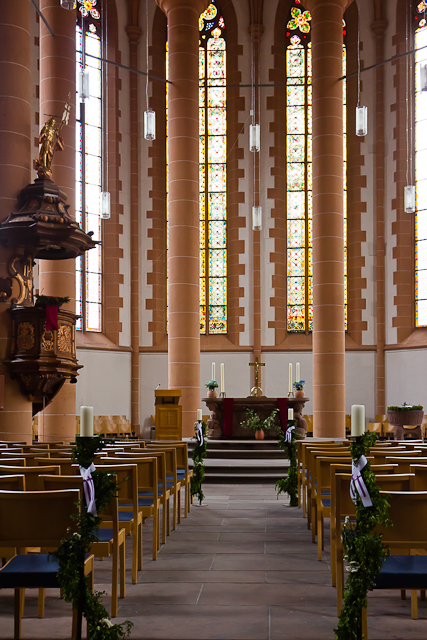 The interior of the Church of the Holy Ghost, the largest Gothic structure in the Heidelberg vicinity. The church was built in the 1300s, destroyed by the French in 1693 and rebuilt in the 1700s.

Our tour ended across the street from the church on Hauptstrasse where our guide told us that the Hotel Zum Ritter, built in 1592, was the only building in Heidelberg that survived the destruction by the French in 1693. 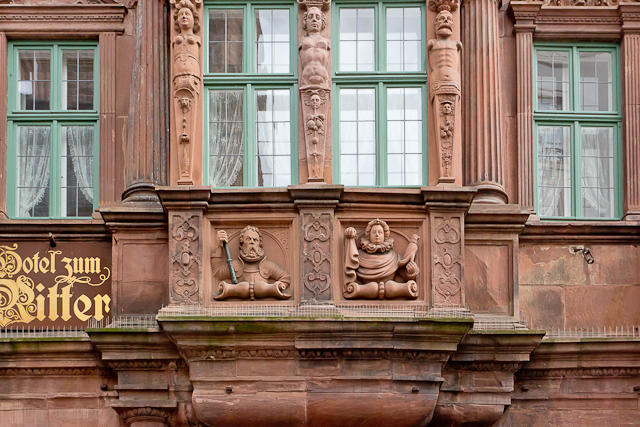 Detail of the Hotel Zum Ritter.

It was now about 4 o’clock and we didn’t have to get back to our bus until 5:00. So I walked down Hauptstrasse to see if I could find my wife. I was on my quest for less than 5 minutes when she spotted me and so we spent the last hour of our tour together visiting some of the shops on Heidelberg’s main street. 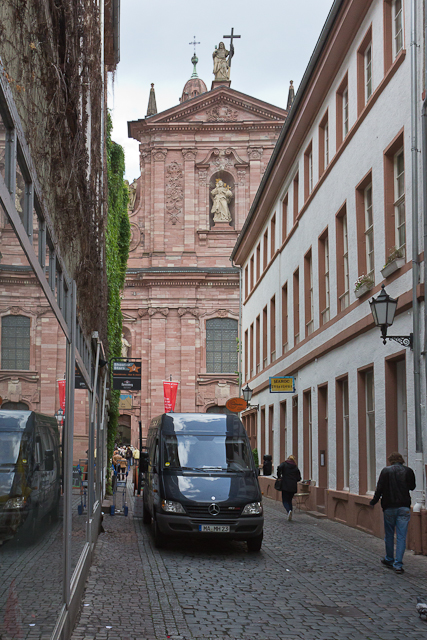 The alley in front of the Jesuit Church.

We all boarded our buses and were about to set off on our trip back to our ship when the woman in the seat in front of me noticed that her purse was missing. This got everyone in a dither for about ten minutes and some people went back and forth to different places nearby as she tried to back track to see where she could have lost her purse. After ten minutes or so it was announced that the bus had to leave and everyone had to get back on. Dragan, our cruise director, also called our tour guide who was on his way home to a suburb of Heidelberg but promised to go back and see if he could find the purse. Twenty minutes later during our ride back Dragan received a call from our tour guide that the purse was found in the pew of the Holy Ghost Church where we sat listening to his stories!  Dragan then told the woman that she would get it back the next day but when we arrived back at the ship we discovered that the person who found the purse (I think it was the church custodian) decided to send it via taxi to the ship and the purse was there waiting for our lucky passenger when we arrived a few minutes later! All of us were impressed by the efficiency we witnessed on the part of the Avalon people involved and their Heidelberg connections in solving what to some seemed to be a minor problem but to the woman who lost her purse it was deemed a major catastrophe and she was most grateful!

And I decided that I would forgive the tour guide for all of those entertaining but dubious stories!