Posted on November 1, 2013 by crowcanyonjournal

Whenever we visit a big city for the first time we like to climb aboard a sightseeing bus, preferably one of those open-air, double-decked affairs with a live guide. It’s a great way to get introduced to a new town: we can leave the driving to someone else and listen to an expert tell us what we are looking at and also decide what and where we want to explore later on our own.
For London we chose The Big Bus, one of a half-dozen or so hop-on /hop-off sightseeing outfits operating in central London. Our tickets cost 30 pounds each (you can save 5 pounds per ticket by purchasing them online at www.bigbustours.com).  We chose the popular red line tour that covers most of the city’s major sights and includes a live tour guide. There’s also a blue line route that includes a few areas further west such as Knightsbridge and Kensington and Notting Hill but offers recordings instead of live guides. The ticket also includes free walking tours at scheduled times throughout the day and a free cruise down the Thames.

We hopped on the Big Bus where Whitehall ends at Trafalgar Square and rode back down Whitehall to Big Ben where we headed south to go over the Westminster Bridge.

Souvenir stand on Westminster Bridge with Victoria Tower in the background.

We then continued along the south bank for awhile catching many views of the London Eye before crossing the Thames again on Waterloo Bridge. 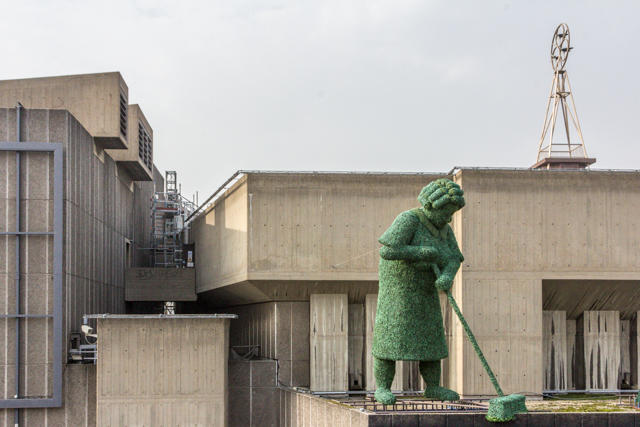 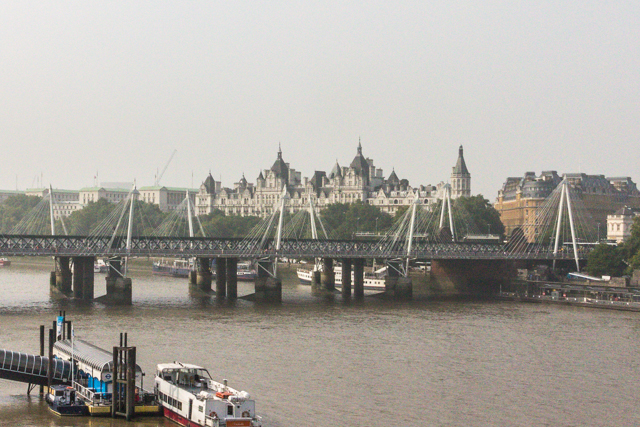 Then we headed east on Fleet Street to St Paul’s and beyond on Canon Street and after a while we found ourselves crossing the Thames again, this time on London Bridge.

Mama Mia is playing at the Novello Theatre.

The Royal Courts of Justice.

Prince Henry’s Room on Fleet Street, one of a few buildings that escaped the great fire of 1666. Samuel Pepys visited this place when it was called The Fountain Inn.

Fleet Street was once the home for all of Britain’s national newspapers. 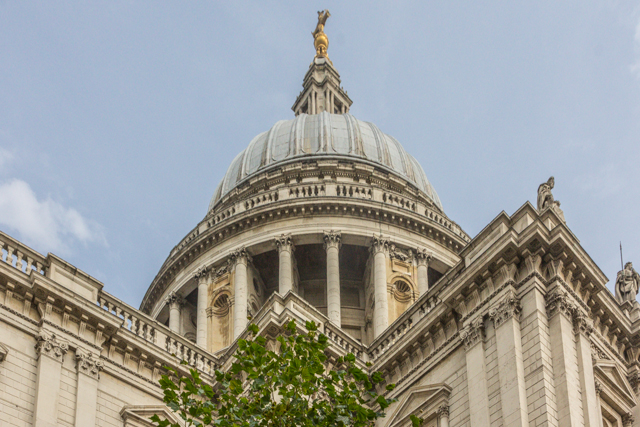 The dome of St Paul’s. 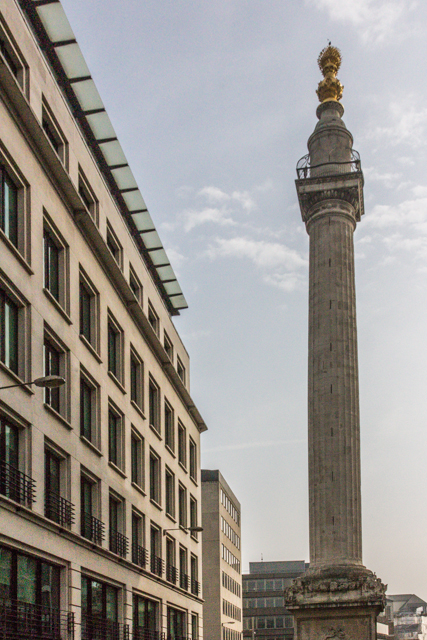 Monument to the Great Fire of London. Only buildings of stone survived the fire that burned for three days in 1666.

View of the Shard as we approach London Bridge. 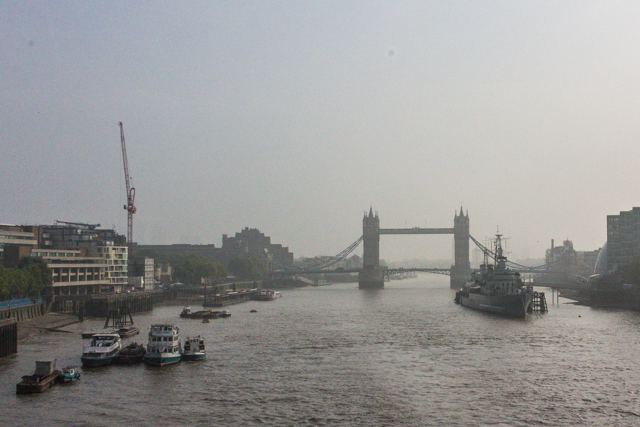 We passed the Shard and City Hall before crossing the Thames a fourth time on Tower Bridge. Then we rode past the Tower of London and headed west paralleling the river on the way back to Westminster where we crossed Westminster Bridge again but this time turned right to the St Thomas Hospital and Lambeth area. We crossed the Thames for the sixth and last time on Lambeth Bridge. 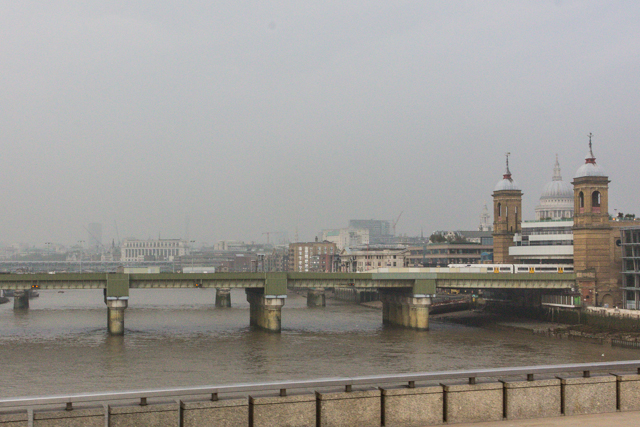 Another view of the Shard. This 87-storey building is the tallest in the European Union. It opened to the public in February of this year.

The Shard and City Hall from Tower Bridge.

The Tower of London with modern skyscrapers in the background.

The old City of London School is now occupied by JP Morgan. The new school is near the Millenium Bridge just down from St Paul’s.

Silver Dragons mark the boundaries of the original City of London.

Cleopatra’s Needle was built more than a thousand years before Cleopatra was born. There’s a twin obelisk in New York.

Every now and then the London Eye would come into view. 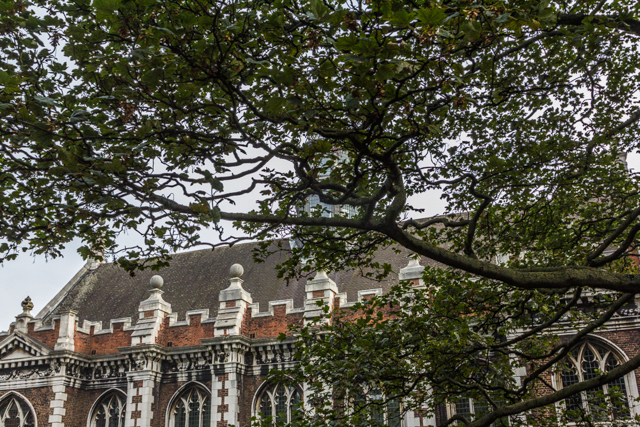 The old St Thomas Hospital hiding behind the trees. Ian McEwan fans will remember that Briony worked here nursing the wounded soldiers from Dunkirk in Atonement. The modern hospital is next door.

The oldest portion of Lambeth Palace. 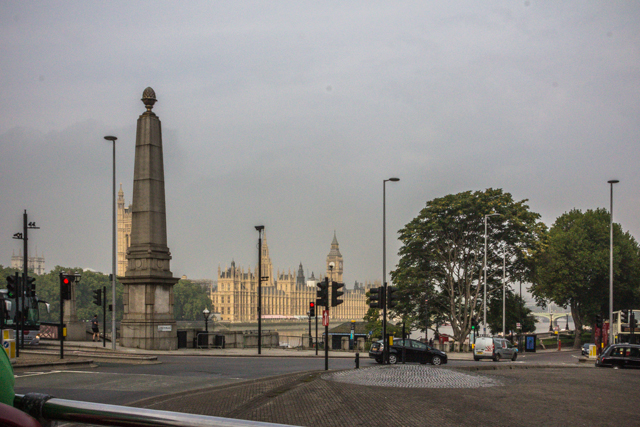 Remember that roundabout in European Vacation? It’s at the foot of Lambeth Bridge. PS: there’s a treat for you at the end of this posting. 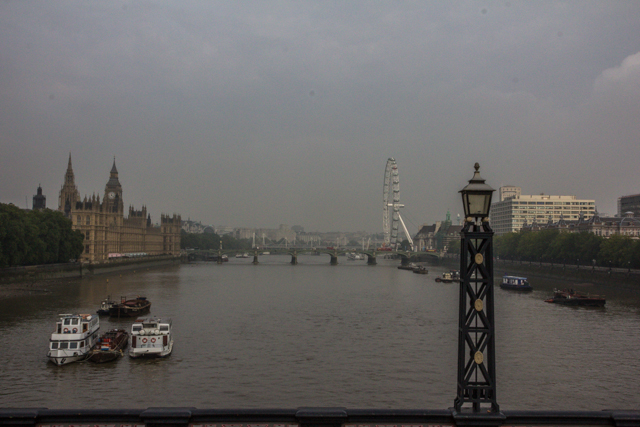 The view from Lambeth Bridge. This was our sixth and final crossing of the Thames during our tour.

Then we passed Westminster Abbey, St James Park, Buckingham Palace, Victoria Station, the Belgravia area, Wellington Arch, Hyde Park, Marble Arch, Grosvenor Square and Green Park where we hopped off to get some lunch at Henry’s Cafe on Piccadilly (The food was so-so but the Rev James ale was lovely!).

Bust of King Charles I on St Margaret’s Church at Parliament Square. 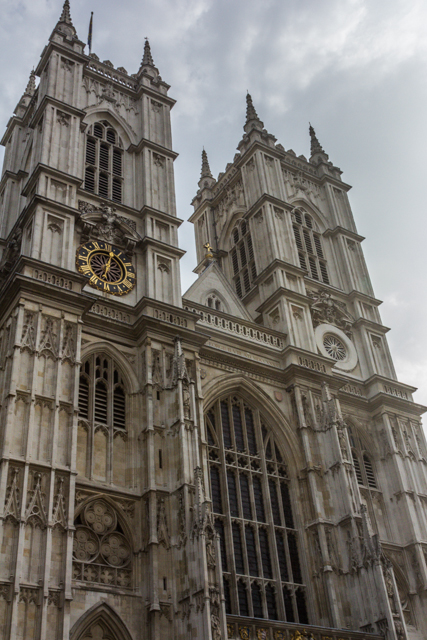 Royal weddings and coronations are held at Westminster Abbey.

The Bluecoat School on Caxton Street was built in 1709 but was closed in 1926. It was recently used as a cafe but is now empty. 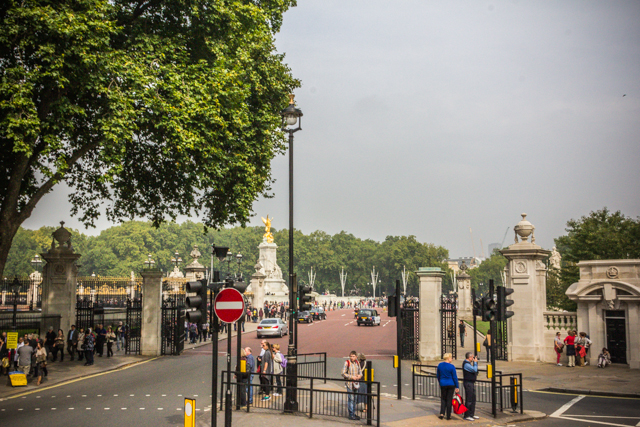 Approaching the front of Buckingham Palace. The Queen doesn’t like buses in front of her house. So we had to drive by a side street. 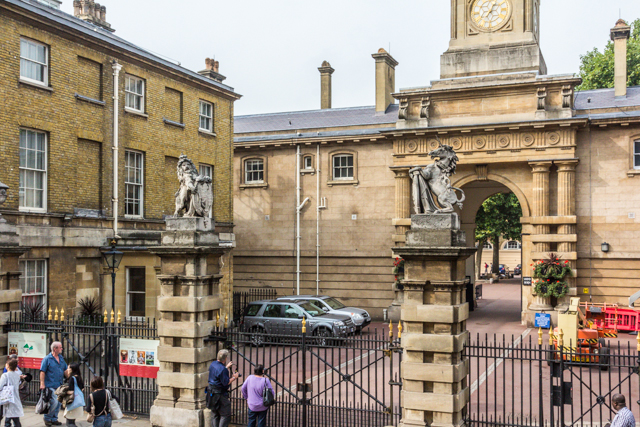 A side entrance to Buckingham Palace.

Westminster Cathedral bell tower in the background. The Cathedral is Catholic; the Abbey is Anglican. 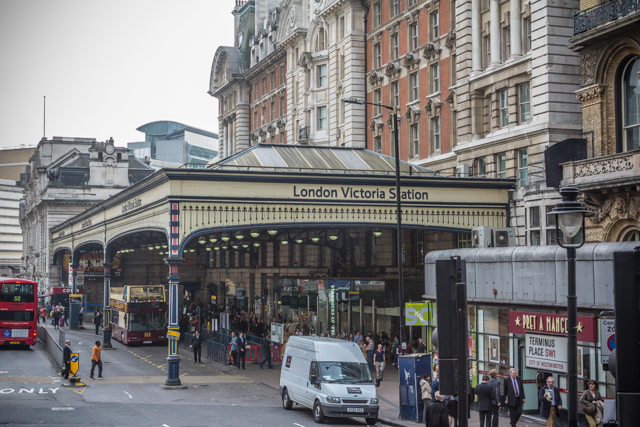 After lunch we hopped on another bus and drove past Hyde Park and Marble Arch again but continued on down Gloucester to Marleybone, Regent Street, Piccadilly Circus, Haymarket and Trafalgar Square where we first hopped on four hours previously. We stayed on the bus for two more stops  to Westminster Bridge in order to catch the cruise down the Thames to Tower Bridge.

Eisenhower statue in Grosvenor Square. That’s the US Embassy on the right. 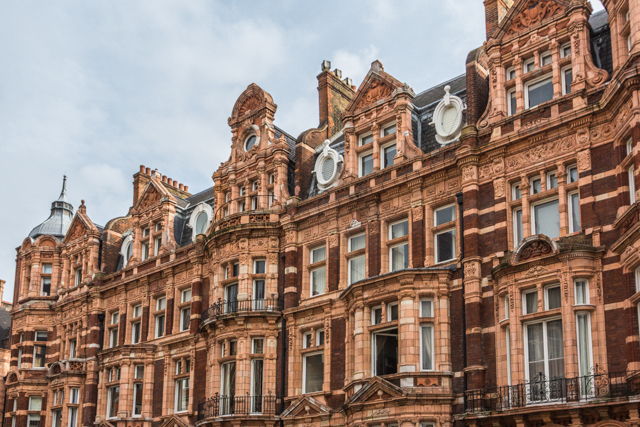 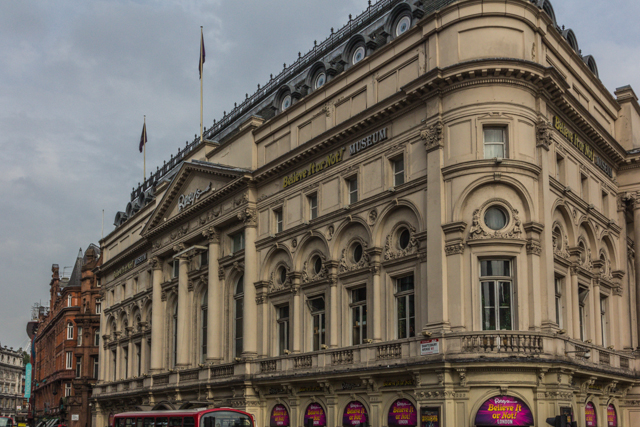 Ripley’s Believe It or Not Museum at Piccadilly Circus.

Her Majesty’s Theatre on Haymarket. 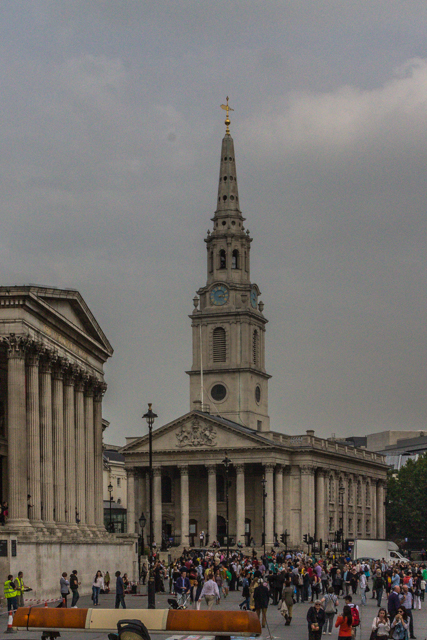 St Martin’s in the Fields Church on Trafalgar Square. The National Gallery is on the left. 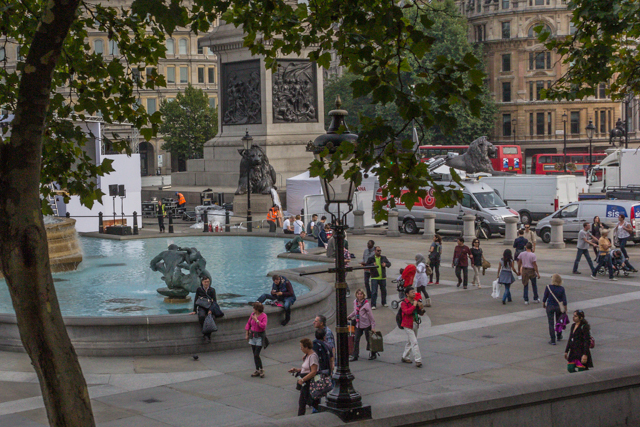 Now here’s a treat for those of you who have managed to get through this long posting: Click here to see that hilarious scene in European Vacation where the Griswolds encounter that famous roundabout near Lambeth Bridge.