Posted on November 16, 2013 by crowcanyonjournal

After visiting Covent Garden on our only Sunday in London we continued on our West End Walk, faithfully following the tour suggested by Rick Steves in his Pocket London Guide. 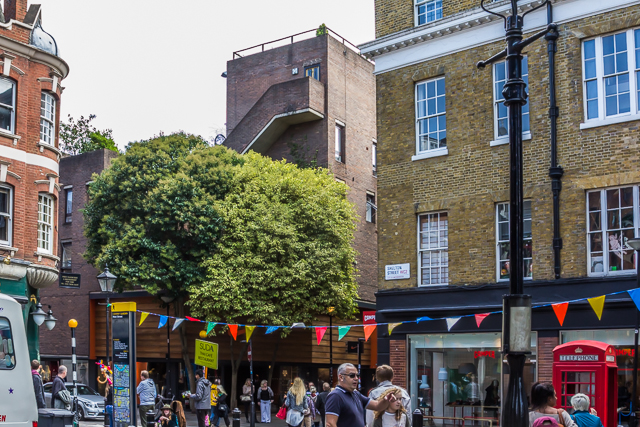 The West End of London is really central London. Our route was entirely within the City of Westminster, one of London’s 32 boroughs, but most people also include the lower part of the borough of Camden as part of the West End, too. We walked this area north of our present walk on the previous Thursday when we visited the British Museum and the neighboring Bloomsbury and Fitzrovia districts. The original City of London is east of Covent Garden and where you will find the city’s financial district and most of its skyscrapers. Yesterday (Saturday) we visited the Spitalfields district east of the City of London and our hotel is northeast of the City in Stratford City. The fancier areas of London today can be found west of our West End Walk: ritzy neighborhoods around Hyde Park such as Kensington, Mayfair, Knightsbridge, Belgravia and Notting Hill.

Nearly all of London’s theatres and nightclubs can be found in the area of our Sunday walk as well as most of the city’s museums and famous squares and shopping streets. Most of the area was built up in the 17th century and for awhile was where London’s wealthiest lived. By the 19th century most of the eastern half or our walk had become slums and the rich moved further west or north or south.

We back-tracked up James to Floral and then walked up Neal Street to Shelton where we turned left until we hit one of the spokes (Mercer) that leads to the Seven Dials. In the 1850s Charles Dickens described the Seven Dials neighborhood as London’s worst slum and was where Irish immigrants who escaped from the Great Famine lived. There used to be a pub at the end of each of the seven streets that culminated in the dials. Now there’s only one left. The Seven Dials Monument, by the way, only has six dials because the original plan was to have only six streets. 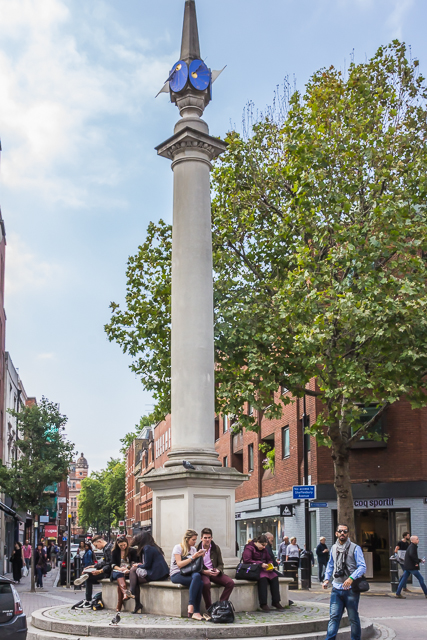 Our walk continued west on another spoke (Earlham) to Cambridge Circus at the intersection of Shaftesbury Avenue and Charing Cross Road. This is the booksellers area of Charing Cross Road and we looked for Marks & Co at # 84 but all we found was this plaque that commemorates the lovely book by Helen Hanff that was comprised of letters written by two booksellers back and forth across the pond.

Plaque where Marks & Co used to be.

84 Charing Cross Road is no longer there. A Belgian restaurant (Leon’de Bruxelles) stands there instead.

The large bookseller Foyles’ is still there — it was undergoing a major renovation when we passed by. 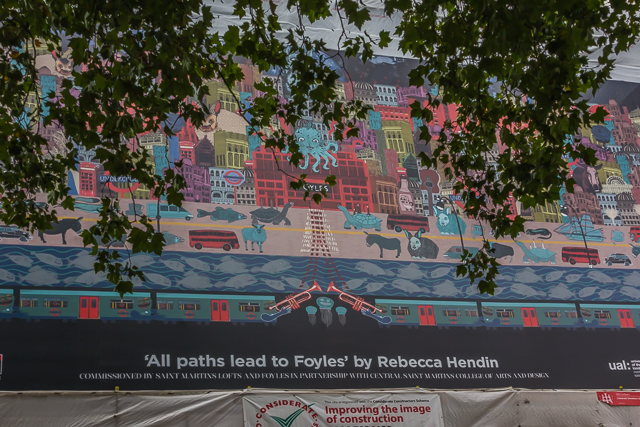 We walked on up Charing Cross to Denmark Street, London’s Tin Pan Alley in the 1920s and where the British rock and roll legends recorded their songs in the 1960s.  The recording studios are gone now but just about every building on the street is still involved in the music business. 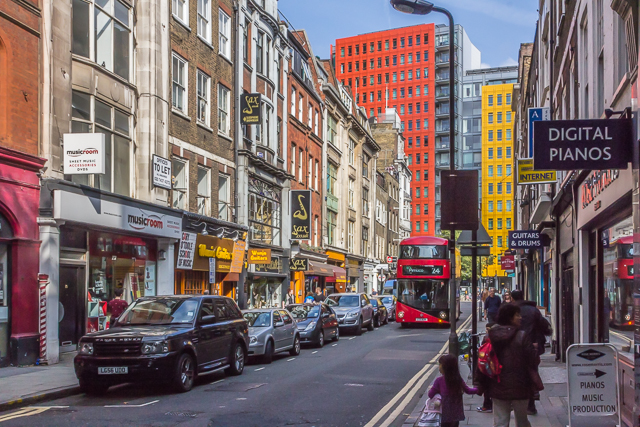 Then we crossed Charing Cross and walked west past Foyles’ on Manette Street (named after the Dickensian character Dr. Manette in A Tale of Two Cities) and through the pub called The Pillars of Hercules passageway to Greek Street which we followed north to Soho Square, a popular grassy area when the weather is nice for both residents and shoppers on nearby Oxford Street.

Manette Street behind the Pillars of Hercules pub.

Statue in Soho Square: The Conversion of St Paul by Bruce Denny. A couple of years ago it stood in front of St Paul’s Cathedral.

The little house in the middle of Soho square is the gardener’s hut.

We left the square and walked down Frith street. John Constable lived here once. So did Wolfgang Amadeus Mozart. And Ronnie Scott’s Jazz Club is still there. We continued on Frith to Old Compton where we turned right (west).

At the intersection of Old Compton and Dean we gazed at the entrance to London’s tiny Chinatown.

View of Chinatown from Old Compton and Dean Streets.

Tisbury Court is sometimes described as the heart of London’s red-light district. It’s a tiny alley with one end where Old Compton ends at Wardour and the other end a stone’s throw from Brewer Street. Brewer Street is noted for having some fine restaurants but the area on the whole is rather sleazy.

We walked down Brewer Street to Lower James Street and turned right, passed Golden Square (where Mr Peggotty found Emily in David Copperfield), turned left on Beak Street and then right onto Carnaby Street. In the 1960s when Nehru jackets were the rage Carnaby Street was at the height of fashion. Now it’s just a street with clothing stores and memories.

We walked the length of Carnaby Street to Great Marlborough Street (Phillip Morris used to have a plant here — that’s how they came up with their brand of Marlborough cigarettes) and then turned left, passing the Liberty Department Store with its striking Tudor architecture before reaching Regent Street. 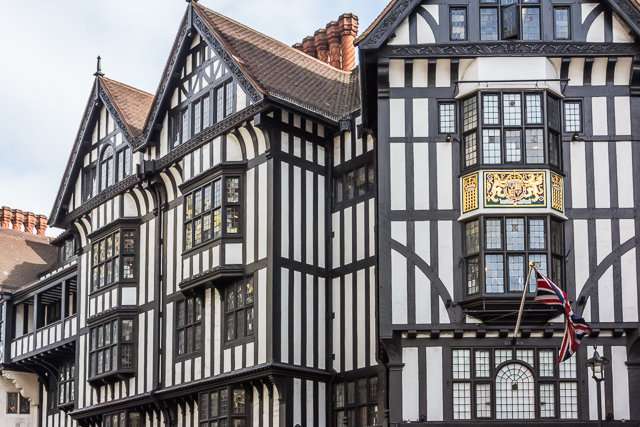 A portion of the Liberty store passes over Kingly Street.

I wrote about Regent Street a while back in my posting called The Other Big Ben. NFL banners were flying high over Regent Street because the Minnesota Vikings were playing the Pittsburgh Steelers this evening at Wembley Stadium.

We walked down regal Regent Street (the Queen owns most of the property on this street) until we hit Piccadilly Circus where we had a late lunch at the St James Tavern on the corner of Denman and Great Windmill Street.

Rick Steves’ West End Walk goes on down Piccadilly Street to Jermyn Street but we decided to end our walk with our lunch. And so we took the tube at Piccadilly Circus Station and headed back to our hotel in Stratford City where we watched the football game on TV in our room that evening.

That was the end of our first week in London. We spent the next four days with our Irish Cousins Henry and Geraldine who flew over from Belfast to spend some time with us.

My next few postings will cover our activities during an all-day trip to Greenwich with our cousins.