London 2013: Christopher Wren and the Dome of St Paul’s

Posted on January 20, 2014 by crowcanyonjournal

We caught our first glimpse of St Paul’s magnificent dome while riding down Fleet Street on our Big Bus sightseeing tour of London.  It is the second largest dome in the world (St Peter’s Basilica in Rome is the largest) and the masterpiece of Sir Christopher Wren, Britain’s greatest architect.

Riding east on Fleet Street on the Big Bus. 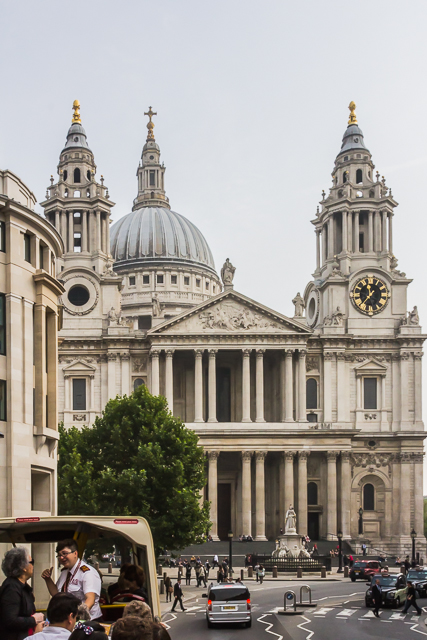 Wren was primarily an inventor, mathematician and astronomer who got interested in architecture in the 1660s when he was in his thirties. In 1665 the plague ravaged London and more than 100,000 people died. Wren decided that this was an opportune time for a visit to Paris to learn about the new architectural style sweeping across Europe that would soon be known as Baroque. During his eight-month visit he met some of the leading architects of Europe, including Francois Mansart and Gianlorenzo Bernini, the famous Italian artist-architect who was invited to Paris by Louis XIV to design the east wing of the Louvre.

The Queen Anne monument in front of St Paul’s. The cathedral was completed in 1708 during Queen Anne’s reign.

Wren was blown away by what he saw. He was particularly impressed with the chateaus designed by Louis Le Vau and Mansart and with two domed churches: The chapel at Sorbonne designed by Jacques Le Mercier and the L’Eglise du Val de Grace, started by Mansart, finished by Le Muet and Le Duc and with a dome designed by Le Mercier.
It is said that Wren went to Paris an astronomer (he was professor of Astronomy at Oxford) but returned to London in February, 1666 an architect. His versions of the buildings he saw in Paris would become known as British Baroque. Louis XIV’s great palace complex at Versailles was just beginning to take shape during Wren’s visit but he saw enough to intensely dislike the designs of Jules Hardouin-Mansart, Francois’s grand nephew who was the chief architect of Versailles. Wren called the younger Mansart’s design too effeminate.

The clock on the left tower was destroyed by German bombs during the Blitz of World War II. 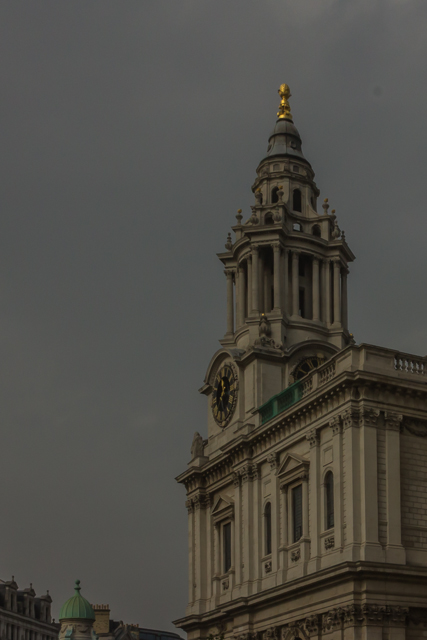 So Wren came up with a style that was more fitting to his own personality. And he brought home the idea of domed buildings. Before his trip there were no domed buildings in all of England.

The bus drove by the south side of the cathedral and I clicked away . . . 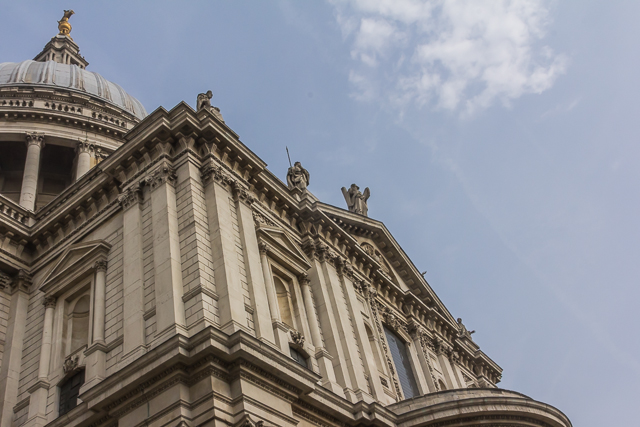 We turned around and passed the cathedral one more time before heading off for the Thames a few blocks away.

In September 1666 most of London burned down and Wren was commissioned to rebuild more than 50 churches including St Paul’s Cathedral which was not completed until 1708 when he watched his son place the last stone on top of the great dome.

Not far from St Paul’s we came across this memorial of the Great Fire of 1666. It is simply called The Monument and was designed by Sir Christopher Wren.

Michelangelo is famous for his “dome within a dome” design of St. Peter’s. He was influenced by Filippo Brunelleschi’s Duomo in Florence and the ancient Roman Pantheon, built in concrete nearly 2000 years ago.  These three domes are the inspiration for all of the baroque and neoclassic domes built in the last 500 years. Some of these domes are wood, some are stone, and some are metal (the outside dome of the US Capitol is all wrought iron). Wren’s unique design consists of a stone interior dome and a wooden exterior dome covered with lead. The two domes are separated by a brick cone strengthened with iron chains. This cone provides all of the support for the stone lantern on top. The outside dome that we see is just for show.

Sir Christopher died in 1723 at the age of 90 and was the first person to be buried in St Paul’s. His epitaph, placed by his son, states in Latin: Lector, si monumentum requiris, circumspice — which translates as  “Reader, if you seek his monument, look around.”

We visited St Paul’s three times during our stay in London but only went inside once. My next posting will cover our second visit when we were both pleasantly surprised and terribly disappointed. Stay tuned.

2 Responses to London 2013: Christopher Wren and the Dome of St Paul’s