Posted on February 15, 2014 by crowcanyonjournal

The Mall is a tree-lined road, straight as can be, that connects Buckingham Palace with Trafalgar Square. It is exactly 0.5 nautical miles between the Victoria Memorial and the Admiralty Arch (Trafalgar Square is on the other side of the Arch). We walked the length of the Mall on the second leg of our journey from Brompton Road to Trafalgar Square.

Popular garden in St James’s Park right off The Mall (public restrooms are nearby).

The Mall is Britain’s ceremonial road. It is closed to traffic on Sundays, holidays and on ceremonial occasions. It has a reddish color to give the effect of a red carpet. London’s V-E Day celebration in 1945 was at The Mall, as was Queen Elizabeth’s Golden (2002) and Diamond (2012) Jubilees. And in 2011 a million people crowded The Mall to see glimpses of Prince William and his new bride. 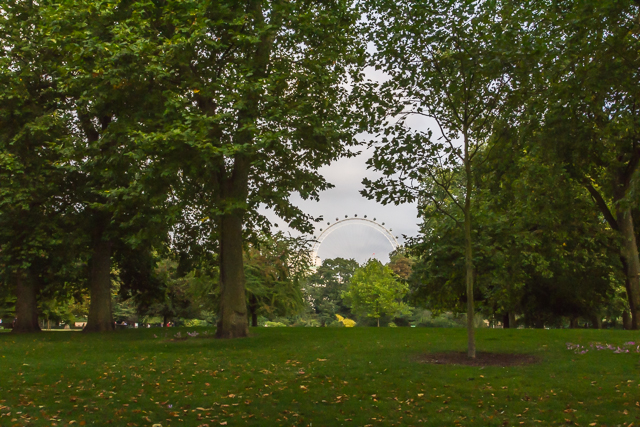 View of St James’s Park and The London Eye from The Mall.

Monument to Queen Elizabeth, wife of King George VI and the present Queen’s Mother. She died in 2002 at the age of 101.

The Duke of York Column. Prince Frederick was the second son of George III and the commander-in-chief of the British Army during the French Revolutionary and Napoleonic Wars. The popular nursery rhyme about “the Old Grand Duke of York” probably referred to him.

Captain James Cook monument at the Admiralty Arch. We saw another statue of Cook at the National Maritime Museum in Greenwich a couple of days before. During our travels over the years we have seen Cook monuments in Hawaii, Alaska, and Newfoundland. And we also once flew over Mt Cook, New Zealand’s highest mountain.

The Mall runs parallel to Pall Mall and to Piccadilly farther north. And it forms the northern border of St James’s Park. Some of the buildings on the north side of The Mall actually front on Carleton House Terrace which is between Pall Mall and The Mall.

Mark Wallinger’s White Horse in front of the British Council headquarters on Spring Gardens (Spring Gardens crosses The Mall between Admiralty Arch and Trafalgar Square). Wallinger has been trying to obtain financial support to build a giant (50 m.) version of this life-size horse to be located in Kent. That’s about the size of the Statue of Liberty!

No, there is no shopping at The Mall.  Both The Mall and Pall Mall get their names from the game of pall-mall, or in French paille-maille, that was popular in the 16th and 17th centuries. It is a precursor to the current game of croquet.  Incidentally, The Mall is pronounced “mawl” but Pall Mall is pronounced “pel mel.”

We walked though the Admiralty Arch to Trafalgar Square which is the terminus of The Mall and the subject of my next posting.