Posted on June 18, 2014 by crowcanyonjournal

Jan (aka Johannes) Vermeer was an obscure but now renowned Dutch painter of the 17th century. Only 35 of his works (some experts say 37) are still in existence and two of them sit side by side in the Louvre. On our second visit to the Louvre during our three-week stay in Paris I concentrated on the French sculpture and the Dutch and Flemish paintings that can be found in the Richelieu wing of the museum. And there in Room 38 I found Vermeer’s The Lacemaker and The Astronomer hanging side by side.

There was a crowd of about a dozen people around The Lacemaker but everyone was ignoring The Astronomer and so I just walked right up and took a picture. I waited around for a few minutes to get closer to The Lacemaker (it’s a very small painting) but the crowd increased rather than decreased. So I went on to a couple of other rooms and then backtracked to room 38 again a little while later. The crowd had now dispersed and I got my picture. 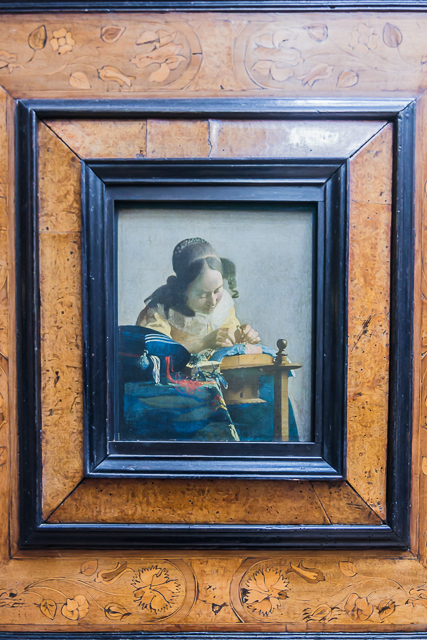 A few days later our stay in Paris was over and we flew back to San Francisco on a non-stop United flight from Charles de Gaulle. I had planned to read one or two books on Paris during the flight but the plane’s reading lights were not functioning and so I watched a couple of movies instead. One of them was The Monuments Men, the story of a group of US Army personnel who saved millions of art treasures from the Germans during the waning days of World War II. A good portion of these treasures were stolen from Jewish collectors during the war. About a third of the way through the movie I was quite surprised to see a closeup of one of the rescued paintings: it was Vermeer’s The Astronomer! 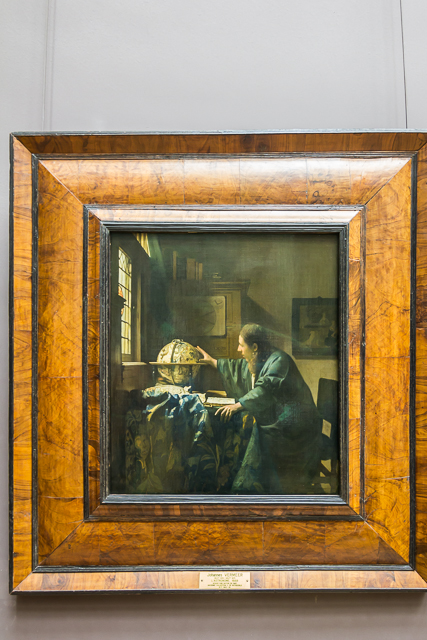 Vermeer painted The Lacemaker in 1669-71 and some people consider it his masterpiece. Both Renoir and Van Gogh adored the painting. I found it interesting but was more interested in The Astronomer and wished that another painting by Vermeer, a more or less twin painting called The Geographer was next to The Astronomer for a more satisfactory comparison. Both paintings were created in the late 1660s and Vermeer probably used the same model, the same room and similar accessories for these two masterpieces. But, alas, the Geographer’s home these days is at the Staedel Museum in Frankfurt, many miles away.

Incidentally, just about everything you ever wanted to know about Vermeer and his paintings can be found on a website called The Essential Vermeer. They even have a list of which paintings have received the most hits on the website. The Girl with the Pearl Earring is in first place. The Geographer is 15th most popular, The Lacemaker is 22nd and The Astronomer is 23rd.

The Astronomer was purchased by Alphonse de Rothschild in the 1880s and passed along to various family members over the generations until 1944 when it was confiscated by the Nazis. The US Army retrieved the painting in 1945 and returned it to the Rothschilds. The French government accepted the painting as a payment for back taxes in 1983 and so the painting made its way to the Louvre.

The Monuments Men is loosely based on the book with the same name by Robert M Edsel. The film was produced by George Clooney, directed by George Clooney and starring George Clooney. Some of Clooney’s buddies — Matt Damon, John Goodman and Bill Murray — are co-stars. The movie has been panned by most of the critics because of its many inaccuracies and its tendency of playing with the truth in order to tell a good story. Well, I have to admit that I sat back and enjoyed the movie, especially the antics of Goodman and Murray and the excellent acting by Cate Blanchett, who has the only lead female role in the film. And I agree with Peter Travers, the Rolling Stones critic, who argues that the story needs to be told and that George Stout (Clooney’s character in the movie is based on Stout) and his men deserve to be honored. “What Clooney has crafted in The Monuments Men“, says Travers “Is a movie about aspiration, about culture at risk (Hitler promised to destroy all of the art treasures he stole if he lost the war), about things worth fighting for. I’d call that timely and well worth a salute.”

It is estimated that the original Monuments Men saved somewhere between five and seven million art treasures during World War II. And thanks to Stout and his unit I was able to see The Astronomer that day at the Louvre. And thanks to the malfunctioning reading lights on the United airliner I was able to enjoy watching The Monuments Men a few days later while flying over the Atlantic Ocean.

1 Response to Paris 2014: Jan Vermeer and The Monuments Men