Posted on August 22, 2014 by crowcanyonjournal

The architecture we know today as Gothic developed in France in the middle of the 12th century. The main features of this new architectural style as opposed to the old Romanesque were pointed arches, ribbed vaults, high ceilings, stained glass windows and on the outside flying buttresses and gargoyles and chimera. People from all over the world flock to Paris to see one of the finest examples of this architecture: Notre-Dame de Paris on the east side of Ile de la Cité. There is no admission fee to walk inside the cathedral and gaze at the magnificent structure and so Notre Dame has become the most popular tourist site in France. More than 13 million people visit the cathedral every year. Trip Advisor rates Notre Dame as #11 out of 750 attractions in Paris. The tour of the cathedral’s towers is # 14.

We visited the cathedral on a Sunday when mass was being celebrated. There is a mass scheduled every weekday at noon and on Sundays at 12:45pm. Also on Sundays there is an international mass with some prayers and readings in English at 11:30am and the Archbishop usually says mass on Sunday evenings at 6:30.  There are usually two lines in front of the church for visitors: one for those who wish to attend Mass and one for those who just want to visit. The latter line is usually very long but it moves fast. There’s another line on the north side of the building for those who want to climb the stairs to talk to the gargoyles and view the rooftops of Paris from the roof of the cathedral. This line moves a tad slower than those in front of the church and there is a charge to climb the 387 stairs to the top. There is also a slight charge for visiting the cathedral’s crypt unless you have a museum pass. Then this visit, too, is free. There are also free audiovisual shows on weekends at 9:30pm and evening concerts are scheduled throughout the year. 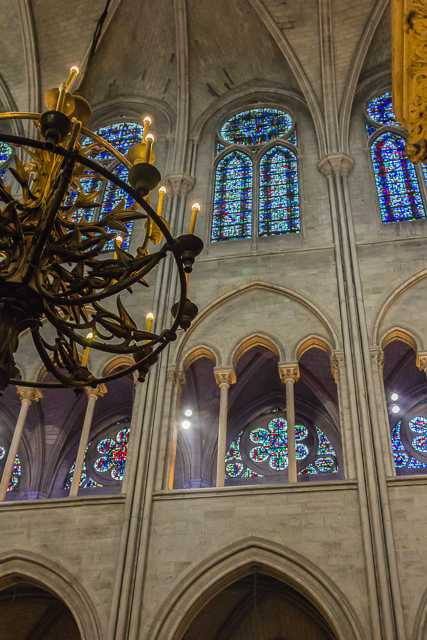 All three tiers in the nave — arcade, triforium and clerestory — feature pointed arches. The stained glass windows are from the restoration at the end of the 20th century. 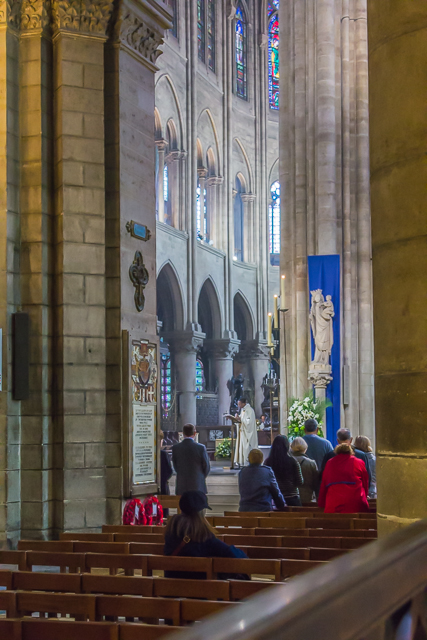 Attending mass — view of choir from the nave. 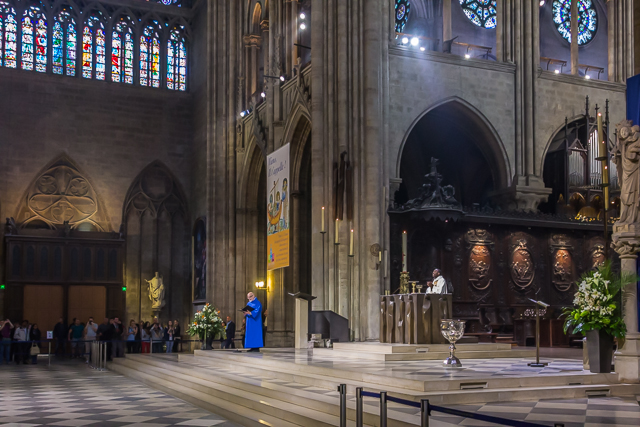 The priest on the right at the main altar is saying mass. The cantor in blue is leading the singing. 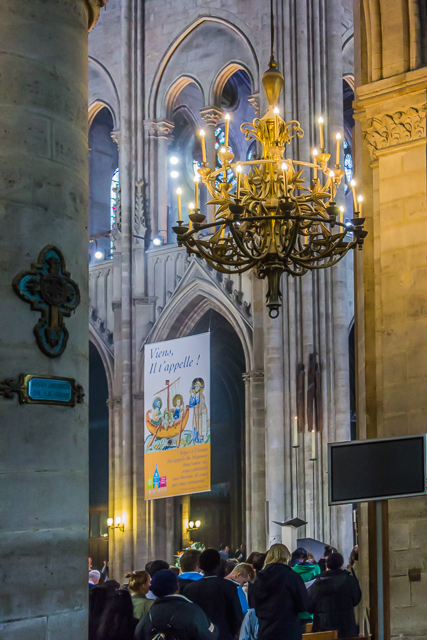 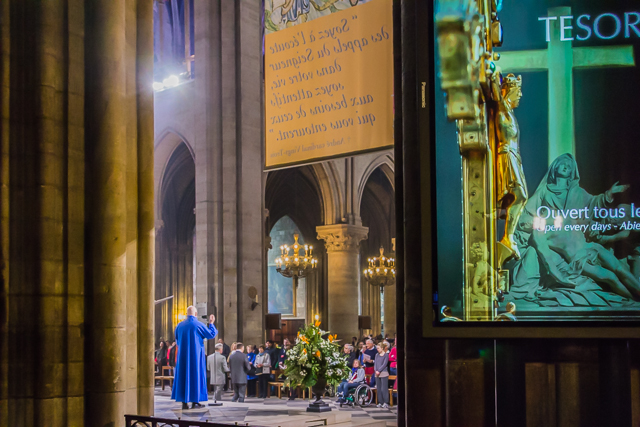 View from the ambulatory — behind the banner in the previous photo. 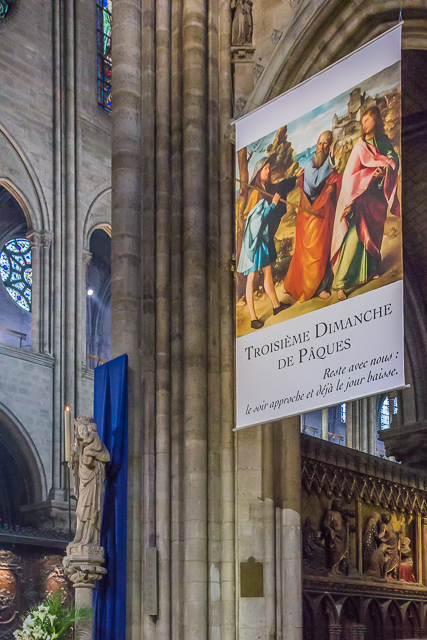 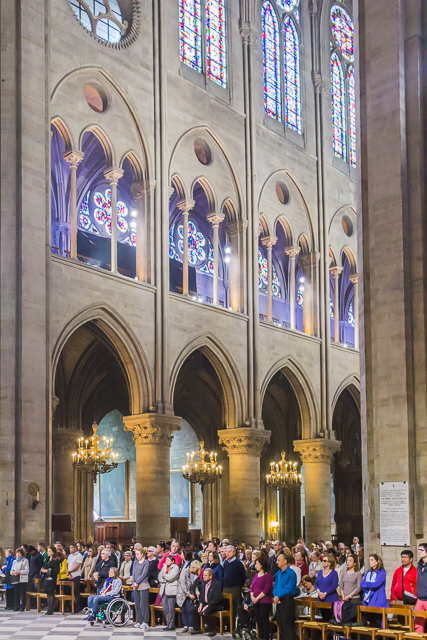 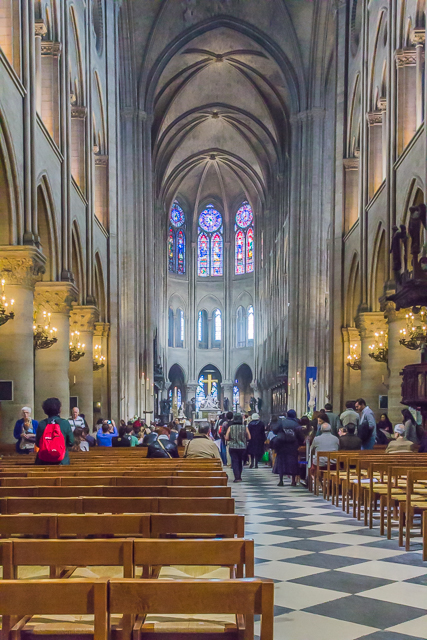 Communion time — view of nave and vaulted ceiling from back of church near west entrance. 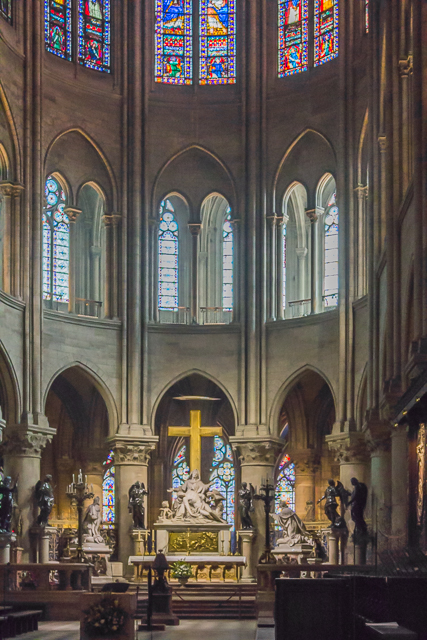 Rear altar at east end of the church. 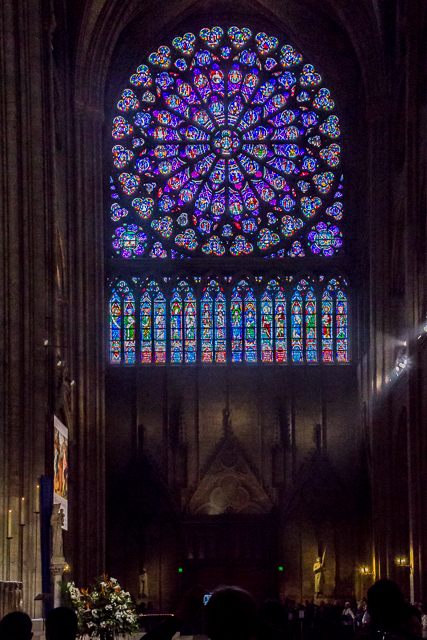 The Parisian Goldsmiths’ Guild began a tradition early in the 17th century where they would commission a large painting and then on May First of the following year amid a lot of fanfare the new painting would be displayed in the church. Many of these paintings, called les Grands Mays, were either destroyed or lost over the years but there are about 50 left and 13 of these are still displayed inside the church. 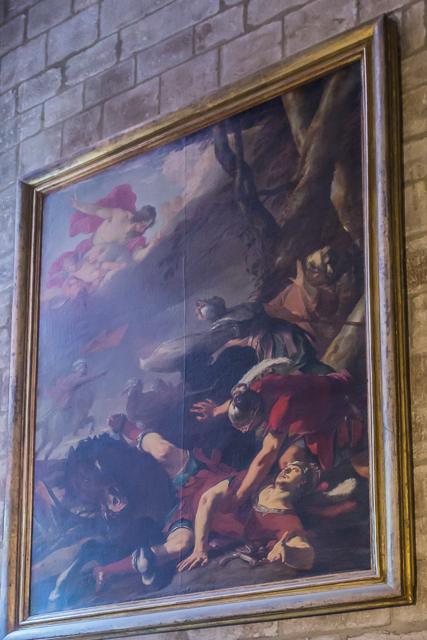 Here are a few photos of statues I came across in the church: 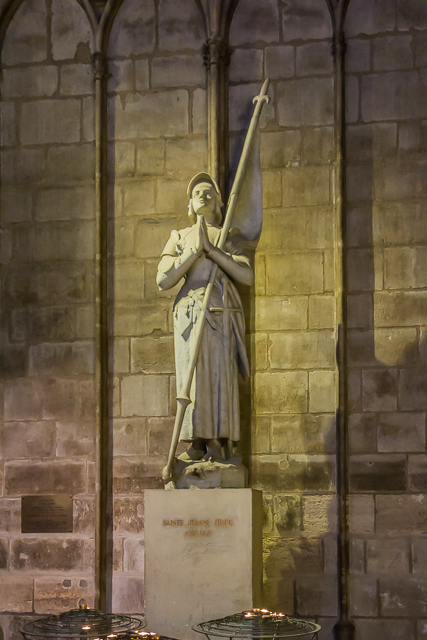 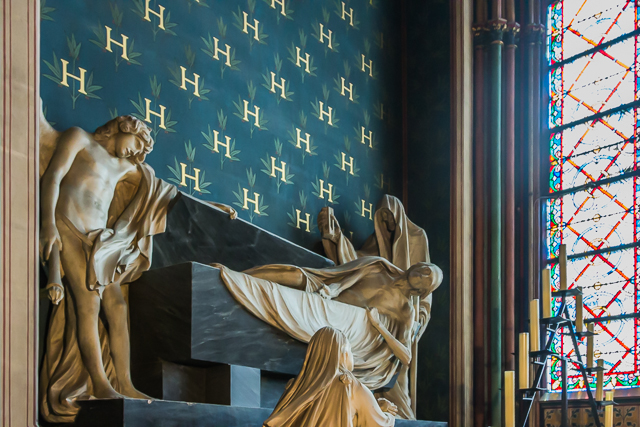 The tomb of Count Claude Henri d’Harcourt by Jean-Baptiste Pigalle. That’s Death in the background holding an hourglass. 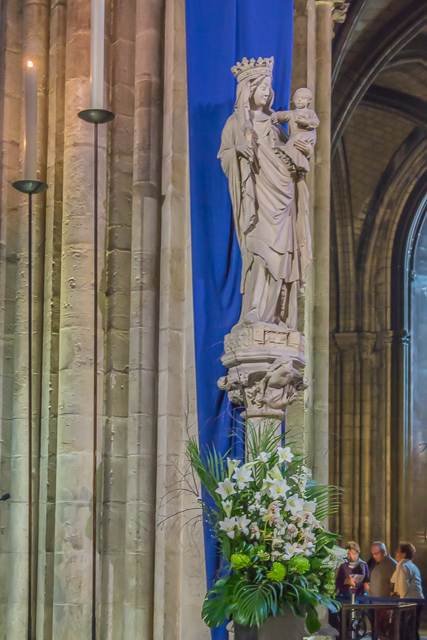