Posted on February 8, 2015 by crowcanyonjournal

Duke Kahanamoku was not a real duke. He was pure Hawaiian but not a member of the Hawaiian royal family. Duke was his real first name. He was named after his father who was a policeman. His father was named after the Duke of Edinburgh who visited Hawaii shortly before Duke’s father was born in 1869. Duke was modest, friendly and soft- spoken. And he was proud of his Hawaiian heritage. His family called him Paoa. Everyone else just called him Duke. 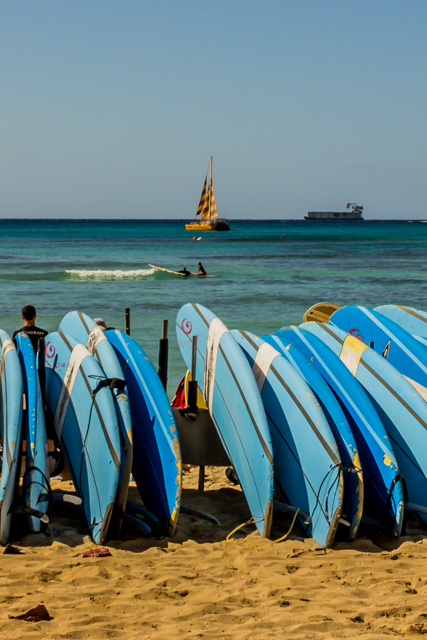 Our Duke was born in 1890 and was a sensation by the time he turned 21. In 1911 he entered his first AAU-sanctioned swimming competition and broke the world’s record for the 200 meter freestyle by 4.6 seconds. The following year he won a gold and a silver medal at the Olympics in Stockholm. It took him 2 years to get home from Sweden because of all the swimming demonstrations he agreed to do all over the world. By the time he hit Australia in late 1914 he was getting bored with all of his swimming. So he carved a surfboard and stunned the entire country with his surfing demonstration at Freshwater Beach near Sydney. “Didn’t the sharks disturb you?” asked one reporter. “No, “Duke replied. “And I didn’t disturb them either.”

There were no Olympics games in 1916 because of the world war but Duke went on working for the Red Cross demonstrating swimming and surfing techniques. Then he won two more gold medals at the 1920 Olympics in Antwerp, breaking his own 1912 record. In the 1924 Olympics in Paris he won the silver medal in the 100 meter freestyle and his younger brother Samuel took the bronze medal. Johnny Weissmuller won the gold medal that year and went on to play Tarzan in the movies. “It took a Tarzan to beat me!” Duke often quipped later on.

In 1930 Duke was 40 years old and began to slow down. So he turned to water polo and he made the 1932 US Olympics team as an alternate and took home a bronze, his sixth Olympics medal.

Duke was a champion swimmer and water polo player. But his favorite sport was surfing. And he is often called the Father of Surfing because of the way he promoted the sport all over the world. He probably was the world’s best surfer, too. One day in 1917 he rode a tsunami wave for more than a mile. He preferred the big 16 foot wooden boards that weighed more than 100 pounds.

Surfing was the sport of Hawaiian royalty — the ali’is — and mostly unheard of outside of Hawaii. The Protestant missionaries who came to Hawaii in the 1820s thought the sport was immoral and tried to ban all surfing activity. By the turn of the century only a handful of boys were still surfing. Duke was one of them. They called themselves the Waikiki Beach Boys and they made a living on the beach singing, playing the ukulele and demonstrating surfing and canoeing to the tourists who frequented the Moana. 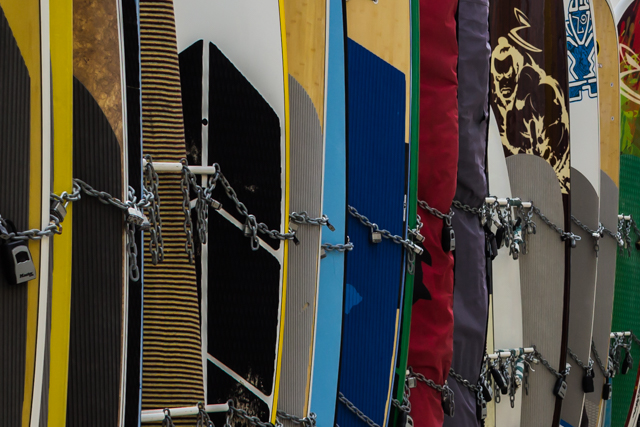 Surfboards on a rack near the Outrigger Reef Hotel. Thanks to Duke, you can see surf boards like these throughout the world.

Duke soon became the darling of the rich and famous and he was invited to promote surfing in southern California and he lived there for awhile in the 1920s. He was popular especially with the Hollywood crowd and he started to appear as a character actor in motion pictures. One of his first movies was a western named The Pony Express. He played an Indian chief. Later on Hollywood came to Hawaii to make some movies and Duke appeared in John Wayne’s Wake of the Red Witch (1948) and in Mr. Roberts (1955) with Henry Fonda, James Cagney and Jack Lemmon.

Duke ran a couple of Union gas stations in Honolulu for awhile and then ran for Sheriff of Honolulu in 1933. He kept on getting reelected and served as sheriff for a total of 27 years. When Hawaii became a state in 1959 he served as the city of Honolulu’s official greeter and as the state of Hawaii’s unofficial ambassador to the world. John F Kennedy visited Hawaii in 1960. The first thing he wanted to do was meet the Duke.

There really was something royal about Duke. He stood 6 foot three and was a fine specimen of a man. His huge hands and feet helped him considerably in his swimming and surfing feats. He also possessed super-hero qualities, the kind you usually only see in comic books and Hollywood movies. In 1925 he was partying on the beach one day in Newport Beach, California when a yacht capsized in the harbor. Seventeen of the 29 people on board perished. Duke got on his surfboard and reached the scene before any rescue boat could and he personally saved eight people from drowning. Other surfers followed suit and saved four more.

One of Duke’s friends was Kimo Wilder McVay who opened up a Waikiki nightclub behind the International Marketplace. He gave Duke part ownership and Duke gave him his name for the club. Don Ho played at Duke’s for six years in the 60s. I saw the Don Ho show one night on my first visit to Hawaii in the summer of 1968.

But I was too late to ever meet Duke. He died of a heart attack on January 22, 1968 at the age of 77. In 1990 in honor of his 100th birthday a statue of Duke was placed on the beach near the police sub-station on Kelakaua Avenue across from the Hyatt Regency. People come by every day and place leis over his outstretched arms. 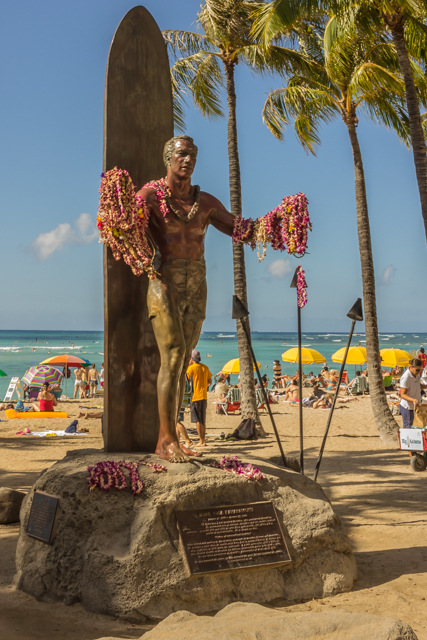 The Duke Kahanamoku statue on the beach near the police sub station and across from the Hyatt Regency.

The original International Marketplace and Duke’s restaurant and nightclub are no longer there. But today there’s a Duke’s Canoe Club and Barefoot Bar and restaurant at the Outrigger next door to the Moana. It’s a very popular place for the under 30 crowd. We went there looking for something to eat during our stay in Hawaii last month but it was too crowded. So we went upstairs to the Hula Grill instead and had a pleasant dinner just a few feet away from a Hawaiian singing and guitar-playing duo. They were wearing Aloha shirts, of course. Just like Duke. With the shirttails out. Duke didn’t like to tuck his shirts in. So everyone today wears his shirts out like Duke did.

That was Duke. Always starting trends. And leading the way.