Hawaii 2015: Anna Rice Cooke and the Honolulu Museum of Art

Posted on February 20, 2015 by crowcanyonjournal

Anna Rice Cooke was a patron of the arts in Honolulu and founder of the Honolulu Academy of Arts which would become the Honolulu Museum of Art. She was born in 1853 in Oahu, the daughter of Protestant missionaries. She and her husband Charles Montague Cooke (also a descendant of missionaries — his father was Amos Starr Cooke, co-founder of Castle and Cooke) built their home on the corner of Ward Avenue and South Beretania Street across from Thomas Square in 1882.

The main entrance to the museum is at 900 South Beretania Street across from Thomas Square.

Charles worked for his father, was a partner in Lewers and Cooke and was for a time president of the Bank of Hawaii which he co-founded. The Cookes were major investors in sugar plantations and became quite wealthy. Charles died in 1909 and Anna spent more and more of her time building and managing her huge art collection. In the 1920s she and her daughter Alice and her two daughters-in-law began cataloging the collection and they obtained a charter from the Territory of Hawaii for creating a museum for the multi-cultural children of Hawaii. In 1924 she hired the first director of the museum and she donated her own house to the museum. The house was torn down to make way for the new museum which was designed in the classic Hawaiian style and opened in 1927. Anna died in 1934. All of the museum docents we spoke with last month talked about her in the most reverent tones and always mentioned her as “Mrs. Cooke,” never as “Anna.”

The museum has a sloping Chinese-style tiled roof.

Bertram Goodhue, a New York architect, designed the museum by blending Chinese and western architecture and creating a new Hawaiian style of architecture. The museum consists of 32 galleries and six courtyards. In 2001 the Luce Pavilion complex, designed by John Hara, was added behind the main museum building. This complex contains the gift shop, a cafe, a theater and a two story Luce wing with two galleries. The Holt Gallery on the second floor of the Luce wing contains a pictorial history of Hawaii. 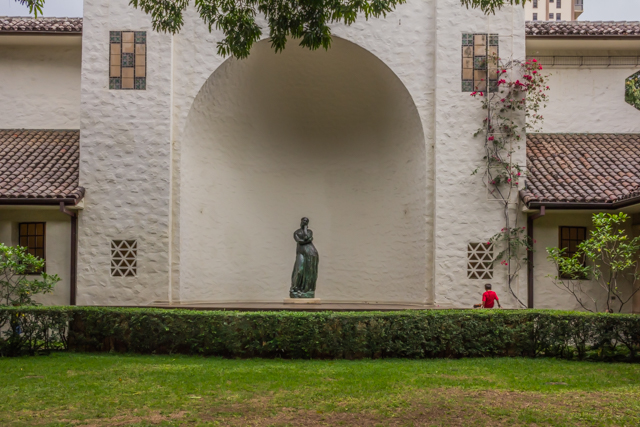 The central courtyard represents Hawaii’s position in the middle of the pacific half-way between the Asian countries of the Far East and America representing western / European cultures.

View of the Mediterranean Courtyard that surrounds American and European art galleries. 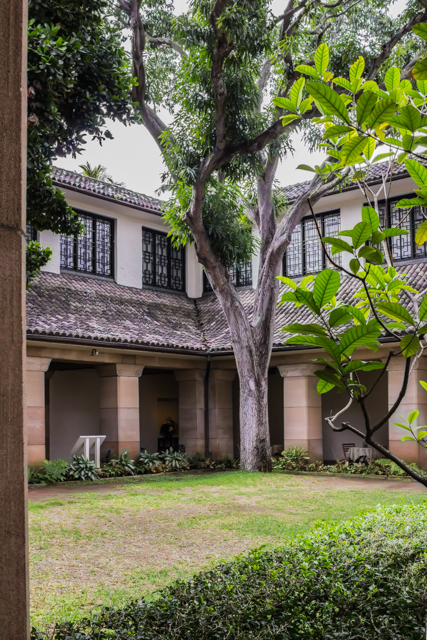 The museum has two floors of galleries.

A glimpse of the Luce Pavilion Complex beyond the central courtyard.

Charles W Bartlett was one of the local artists who was befriended by Anna. He was a British artist who went to France to study and became interested in Japanese art. In 1913 he and his wife planned a round-the-world trip that would take them to India and other countries in the Far East. By 1916 he was in Japan where he met Watanabe Shōzaburō, a publisher of woodblock prints. They soon formed a collaboration where Bartlett would produce a watercolor painting and Watanabe would produce the print. They produced 22 prints in 1916, mostly from sketches Bartlett made in India and other south Asia countries. In 1917 Bartlett sailed across the Pacific to Hawaii which he liked so much that he stayed for the rest of his life, never returning to England.

Bartlett continued to paint in oils and watercolors as well as etchings. In 1919 and again in 1923 he collaborated with Watanabe in producing more woodblock prints. Bartlett would send watercolors to Japan and Watanabe would create woodblocks from them. By 1926 Bartlett tired of this collaboration and decided to produce his own prints from his own etchings. In 1928 he co-founded the Honolulu Printmakers. The initial art collection that Anna Cooke turned over to the museum in 1927 contained many works by Bartlett and more would be added over the years. In 1928 Anna donated an entire series of watercolors Bartlett created in 1921 while traveling in China with Anna and her daughter Alice. Bartlett died in Honolulu in 1940 at the age of 80.

Bartlett’s oil portrait of Anna hangs on a wall near the museum’s main entrance.

The Spalding House up in Makiki Heights near the Punchbowl Crater was named after Anna’s daughter Alice who married Phillip Spalding. Anna built the house after she donated her own home to the new museum. The Honolulu Museum of Art acquired the Spalding House in 1968 after Alice died. In the 1970s The Michener woodblock print collection was located there and one day in 1977 I took the bus up the hill to see the Japanese prints displayed there. The property was sold in the late 70s and The Spalding House became the Contemporary Museum in 1988. The Michener collection contains more than 6,000 prints and is now in the main museum on South Beretania Street. Over the years the museum has acquired more collections and their total number of Japanese prints now exceeds 12,000.

We visited the museum one day last month hoping to see some of Bartlett’s work and some of the woodblock prints from the Michener Collection. I’ll have more about what we saw that day in future postings.

2 Responses to Hawaii 2015: Anna Rice Cooke and the Honolulu Museum of Art