Posted on June 2, 2015 by crowcanyonjournal

After spending most of the day one day last month on Cocos Island we drove around the southern tip and eastern side of Guam and visited Talofofo Falls. Last month was my fourth visit to Guam and my third visit to the falls. On my first visit in 1972 we drove on a dirt road in a jeep into the boonies to reach the falls. Our visit was three months after a Japanese soldier named Sergeant Yokoi was discovered hiding in a cave not too far from the falls. He had been hiding there for 28 years! I remember a shiver going down my spine when I stared into the jungle and wondered if there were any other Japanese soldiers still around. Yokoi became a national hero in Japan but back in Guam the local people remembered that every now and then over the years a Chamorro would go hunting near the falls and never return. How many people did Yokoi kill during those 28 years if they wandered too close to his cave?

Talofofo Falls. This is my entry this week to Leanne Cole’s Monochrome Madness Challenge. Leanne’s theme for this first week of the month is “water.”

My second visit to Talofofo Falls occurred in 2004. By this time there was a paved road all the way to the falls and the place was built up with an amusement park and a shrine and memorial to Sergeant Yokoi — beckoning to the many Japanese tourists who come to Guam every year. The place is still a tad out of the way, however, as can be shown from this shot of wild pigs roaming freely around the parking lot. 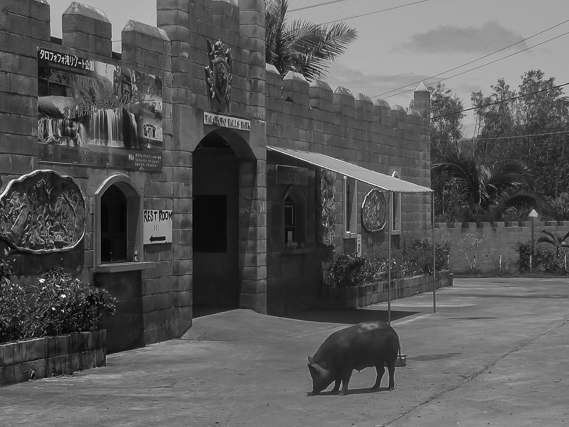 On our visit to the falls last month we noticed that the tourist appeal has lessened and most of the amusement park was closed down. Even the pigs were scarce as we only saw one or two in the bushes near the parking lot. Here’s another shot of the falls with my  daughter and her husband providing a sense of scale.

Another shot of the falls with my daughter and her husband providing a sense of scale.

I’ll have more photos of Talofofo in a future posting.

Be sure to drop by Leanne Cole’s website to see what other photographers are doing in monochrome these days!