The Black Madonna of Montserrat

Posted on February 12, 2016 by crowcanyonjournal

Her official name is Mare de Deu de Montserrat (Mother of God of Montserrat) but most Catalans call her “La Moreneta (the little dark-skinned one)” and Pope Leo XIII appointed her the patron saint of Catalonia in 1881. Most tourists refer to her as The Black Madonna and every day people wait in line for up to two hours in order to say a prayer and touch the globe she is holding. 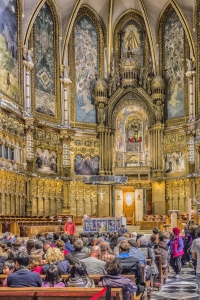 The Black Madonna sits on her gilded throne high above the Basilica’s altar.

CLICK ON THE PHOTO FOR A LARGER VERSION OF THAT PHOTO. 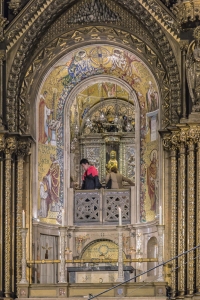 Pilgrims stand in line for up to two hours in order to reserve 30 seconds in front of the statue.

This statue of the Virgin Mary on her throne with her Christ child on her lap was created about a thousand years ago. It was hidden in a cave for a time but since 1947 she sits high above the altar of the Basilica of Montserrat for all to see.

No, this lady is not African. She is Catalan. And her head and hands are made of wood which has turned to black over the years.

Why do people go to Montserrat? Some come for the view and to explore the natural park. Some to hear the boys’ choir. But for most Catalans it’s a pilgrimage: they go to Montserrat to see and venerate the Black Madonna. 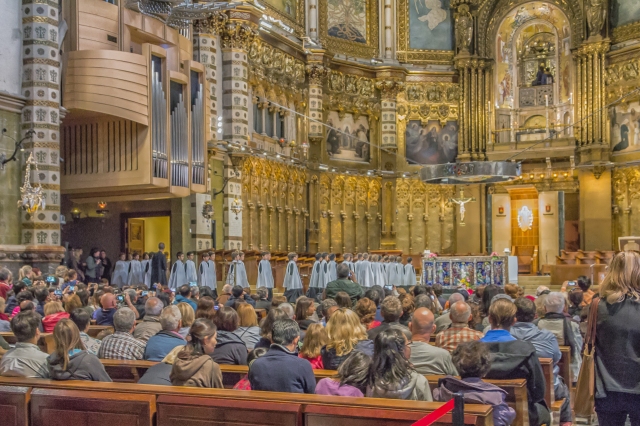 The famous Boys Choir enter the crowded Basilica for their performance which is held almost daily at 1pm. 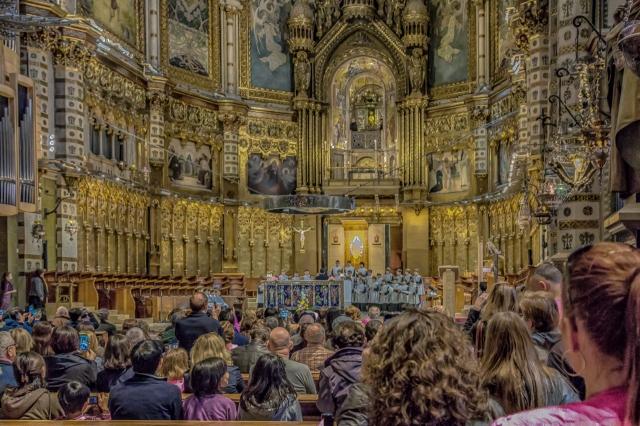 The choir sang for about 20 minutes on the day we visited.

Abat Oliba founded the Monastery of Montserrat in 1025. Napoleon invaded Spain in 1811 and destroyed the monastery for no good reason. He just felt like it. But it was rebuilt in the 1840s and the present basilica was completed in 1901. 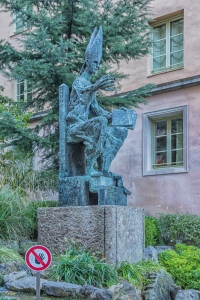 Abat Oliba founded the monastery in 1025. 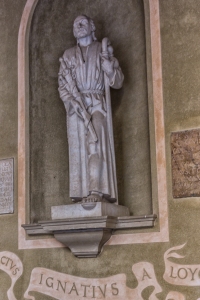 Ignatius Loyola stayed at the monastery for awhile in 1522 and then went off to found the Society of Jesus.

During the Spanish Civil War a couple of monks were executed for harboring fugitives which bolstered the Catalan resentment of the Franco regime and strengthened their drive for independence.

Today about a hundred monks live in the Benedictine monastery and there is a also a dormitory for the boys in the Escolania, the famous boys choir. The press has been publishing — all in Catalan — works since 1499.

Also at the monastery: a couple of restaurants, a supermarket, a book store, a gift shop and a museum. We had lunch at the Bar la Placa. My wife drank some tea with her bikini sandwich (ham and cheese); I had a beer with mine.

Back in Barcelona we visited the Cathedral and a couple of local churches. They all had their own versions of the Black Madonna. 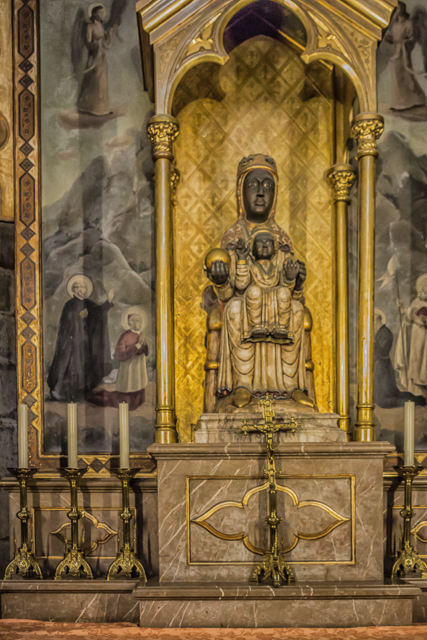 The Barcelona Cathedral’s version of the Black Madonna. 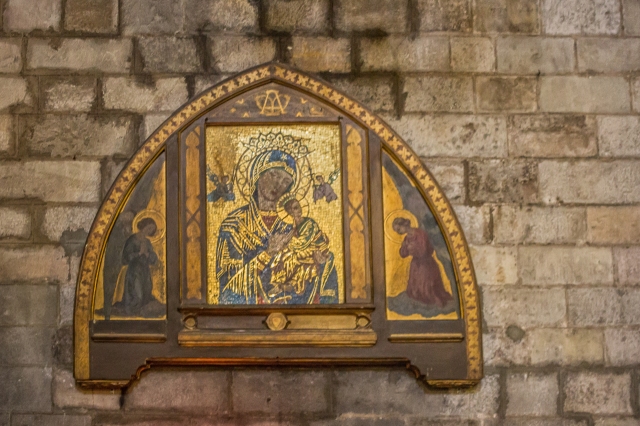 Madonna mosaic in La Concepcio church in the Eixample district of Barcelona. 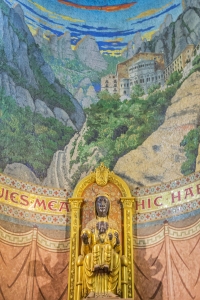 Black Madonna in the basilica of Sagrat Cor atop Tibidabo.

I’ll have more pictures of Montserrat in my next posting.

I am a family man with interests in family history, photography, history and travel.
View all posts by crowcanyonjournal →
This entry was posted in Barcelona, Spain, Travel and tagged Black Madonna, La Moreneta, Montserrat, Montserrat Monastery, photography, travel, travel photography. Bookmark the permalink.

8 Responses to The Black Madonna of Montserrat