Posted on March 24, 2016 by crowcanyonjournal

The Basílica i Temple Expiatori de la Sagrada Família (The Basilica and Expiatory Church of The Holy Family) is located in the northeast portion of Barcelona’s Eixample district. The best way to get there is to take the Metro. Both the L2 and the L5 lines stop at Sagrada Familia Station, which is right across the street. Here’s the view at the top of the stairs once you exit the underground Sagrada Familia Station: 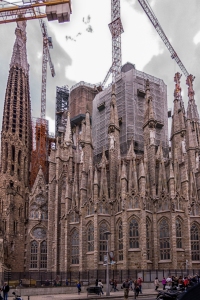 La Sagrada Familia from the Metro exit across the street.

We took the L4 train at Urquinaona Station which was just two blocks from our hotel. Then we transferred to the L2 at Passeig de Gracia Station (the next stop). Then we rode on the L2 for a couple of stops until we reached Sagrada Familia. We allowed for an hour and got there in 15 minutes — 45 minutes too soon. You can’t enter the church before the time marked on your ticket.  So we walked around the block and I took pictures of the basilica from all sides while my wife browsed at all of the souvenir shops we passed.

You can either wait in line for a couple of hours to buy your admission ticket to the basilica or you can purchase your ticket online, which I did on a Thursday but by then all tickets for Saturday and Sunday were all sold out and we had already made plans for Friday. So we bought our tickets for Monday afternoon. You can also pay extra for another ticket to allow you to take an elevator up one of the towers for a view of the city. But these tickets were all sold out for Monday afternoon. By the way, you can use the elevator in both directions for the Passion tower but if you opt for the Nativity tower and you will have to walk back down.

Here are some photos I took on our walk around the block: 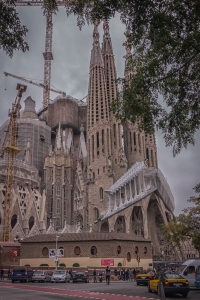 The Passion Facade from across the street. The Basilica has three facades. Only the Nativity Facade was completed during Gaudi’s lifetime. The Passion Facade looks like it is about 90% complete but the Glory Facade is no way near completion. 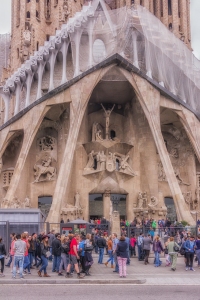 Close-up of the Passion Facade. 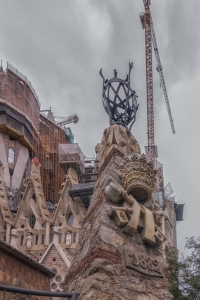 Construction began on the basilica in 1882. Antoni Gaudi took over in 1883 and worked on his favorite project until he died in 1926. It is hope that the project will be completed by 2026. 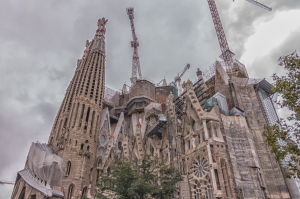 The finished basilica will have 18 towers but right now there are only eight: four on the Nativity Facade and four on the Passion Facade (left). The Glory Facade (right) eventually will also have four towers. Then there will be six taller towers in the middle. 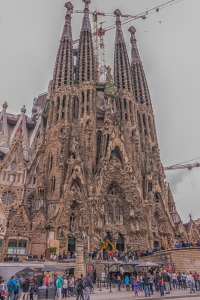 The main entrance to the basilica is through the Nativity facade.

I took a couple of close-up shots of the sculpture on the Nativity facade as we walked in the main entrance. 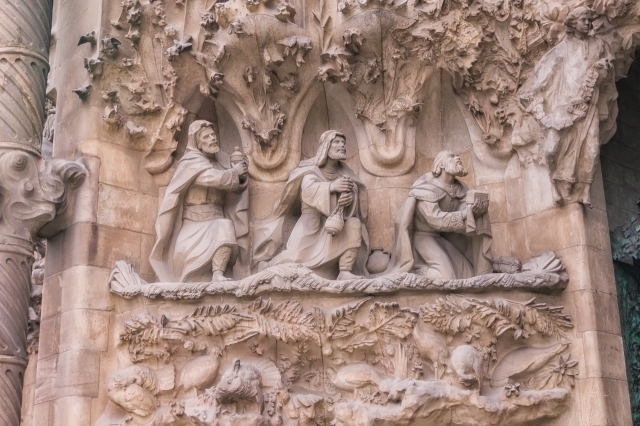 The Three Kings at the Nativity. 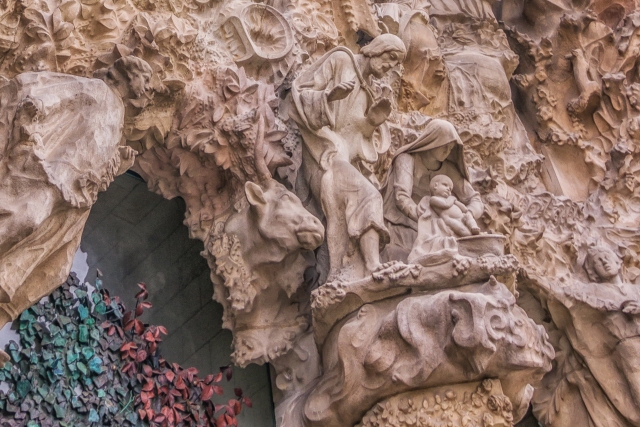 We then walked inside the basilica and were blown away. You’ll see why from the photos in my next posting.