Sir Arthur and I in Edinburgh

Sir Arthur Conan Doyle and I have something in common: We both lived for a while on Picardy Place in Edinburgh. Sir Arthur was born there in 1859 and lived there for five years before moving to other parts of the city. A few weeks ago my wife and I stayed at the Holiday Inn Express in Picardy Place for a week. Then we moved on to Glasgow. 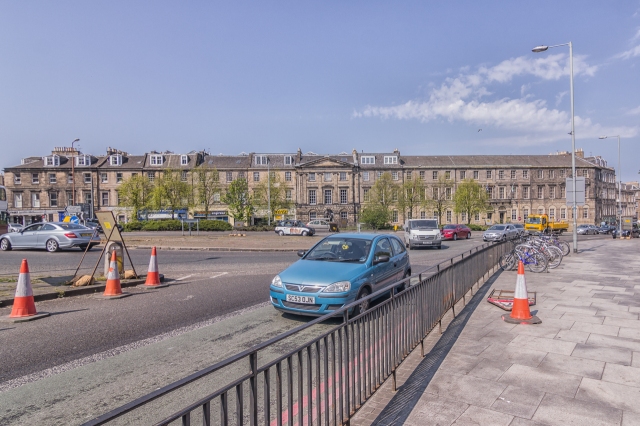 Picardy Place is located at one of the most interesting intersections in Edinburgh. It is one block long and consists of several buildings of equal height and is bounded by York Place and Broughton Road on the west and by Leith Walk and Leith Street on the east. South of Picardy Place is a roundabout and a few triangles. There’s a statue of Sherlock Holmes on one of those triangles and a couple of other works of art are scattered around the intersection. Across Leith Walk from Picardy Place is a playhouse and several pubs and bars which cater to the theatre crowd. As Leith Walk becomes Leith Street at the roundabout the sidewalk expands in front of the glass OMNi building that features restaurants on the ground floor and cinemas on the upper floors. Martha and Gilbert, two giraffes made out of scrap metal, frolic outside the OMNi Centre on the expanded sidewalk. 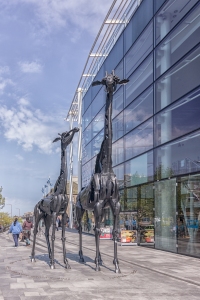 Martha and Gilbert in front of the OMNi Centre. The real name for the scrap metal sculpture by Helen Denerley is Dreaming Spires.

Cathedral Lane enters the intersection between the Conan Doyle Pub on York Place and the St. Mary’s Catholic Cathedral. St James Place and Little King Street separate the cathedral and its plaza from St James Shopping which is in the process of being torn down so that it can be resurrected as Edinburgh St James in 2020. In front of the cathedral are a couple of works of art including a large foot. 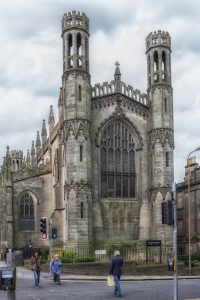 St Paul’s and St George’s Episcopal Church on the corner of Broughton Street and York Place across the street from Picardy Place.

The Conan Doyle pub on York Place kitty-korner from Picardy Place. St. Mary’s Cathedral is to the left. 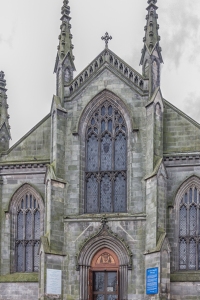 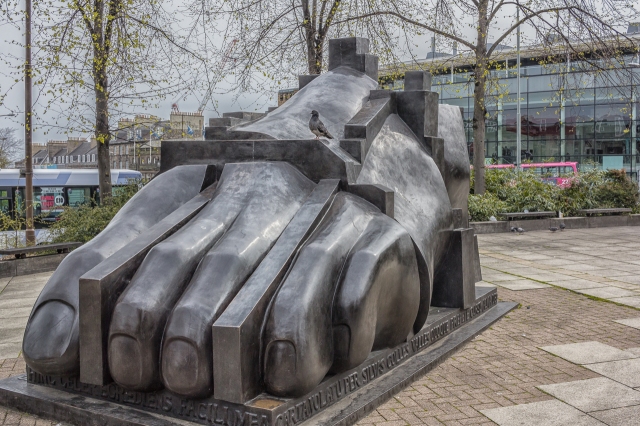 The Big Foot in front of the Cathedral. The OMNi Centre is in the right background and the Edinburgh Playhouse and several bars / pubs are on the left background. The Big Foot is part of a three-piece sculpture by Sir Eduardo Luigi called the Manuscript of Monte Cassino.

Past the roundabout Leith Street climbs uphill past the soon-to-be-demolished shopping center to Waterloo Place which connects on the left to Calton Road that winds down to Holyrood Palace and on the right to Princes Street where you will find the Balmoral Hotel, the Princes Street Gardens and the Sir Walter Scott Monument. From Princes Street you also have a choice of bridges to take you over the Waverley Train Station to Old Town Edinburgh and the Royal Mile.

Sir Arthur and I have another thing in common: we both were educated by the Jesuits. I attended St Ignatius High School in San Francisco and then stayed on at The University of San Francisco for another four years. At the age of nine Sir Arthur was sent off to attend the Jesuit schools at Stonyhurst in Lancashire. After seven years in Stonyhurst he attended another Jesuit school in Austria for another year. He later returned to Edinburgh to attend medical school at the University of Edinburgh. One of his professors, Joseph Bell, was known for his keen powers of deductive reasoning and Doyle modeled his character of Sherlock Holmes after him. He probably modeled the character of Dr Watson after himself for he obtained an advanced medical degree at the University of Edinburgh. He began writing stories during his schooling and eventually chose a writing career over the practice of medicine. He lived in England during most of his writing career.

Oh, we have one more thing in common: Doyle’s full name was Arthur Ignatius Conan Doyle. My grandfather’s first name was Ignatius and when I was 13 I chose Ignatius as my Confirmation name.

Sir Arthur was also quite the athlete in his younger days. He played on amateur football and cricket teams (his cricket teammates included fellow authors A.A. Milne and J. M. Barrie) and excelled in golf. He also was one of the first British celebrities to take up skiing. No, we have nothing else in common. The only game I play is fantasy baseball on the Internet!

3 Responses to Sir Arthur and I in Edinburgh