Traveling with our Irish Cousins in Europe and the US

Posted on October 22, 2016 by crowcanyonjournal

We stayed in Edinburgh for one week during our visit to Scotland this last May. And three of those days were spent with our Irish cousins Henry and Geraldine and Henry’s niece Rosie. It was our eighth reunion with our Muckle relatives since we first met on our trip to Ireland in 2002. 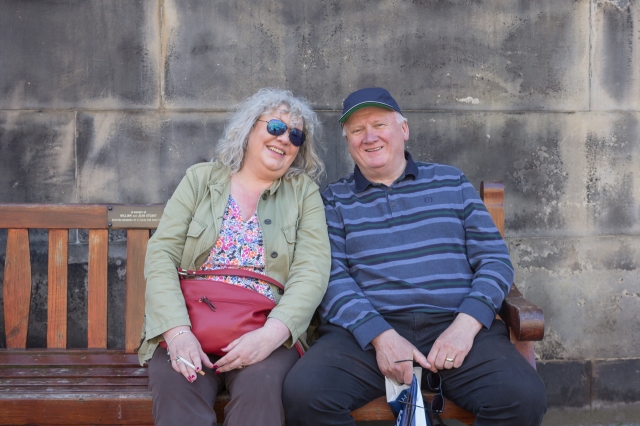 Geraldine and Henry resting on a bench outside St Giles Cathedral on the Royal Mile in Edinburgh (2016).

It all began in 2001 when Geraldine’s sister Joan spotted a posting of mine on a genealogy website where I was inquiring about any Muckle relatives still living in County Down. Henry answered my inquiry and we eventually discovered that we were fifth cousins and our common ancestor left Scotland in the 18th century to settle in Ballycopeland on the Ards Peninsula. 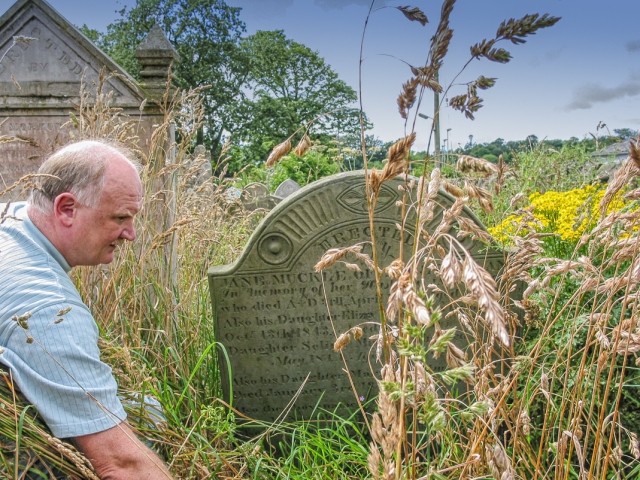 Henry discovering a Muckle headstone in the neglected Donaghadee Church of Ireland graveyard (2002) . My great grandfather Tom Muckle was baptized in this church.

We flew to Dublin in 2002 and then took the train to Belfast where Henry and Geraldine met us at the station. We spent a week in Northern Ireland and Henry and Geraldine showed us all the spots on the Ards Peninsula where our ancestors once lived. We also traveled along the Antrim coast and went on several short County Down trips to such places as Lisburn and Downpatrick. Then we rented a car and drove all over Ireland for four more weeks, ending up in Dublin. Henry and Geraldine drove down to meet us in Dublin and spent a couple of days with us before we flew back home. 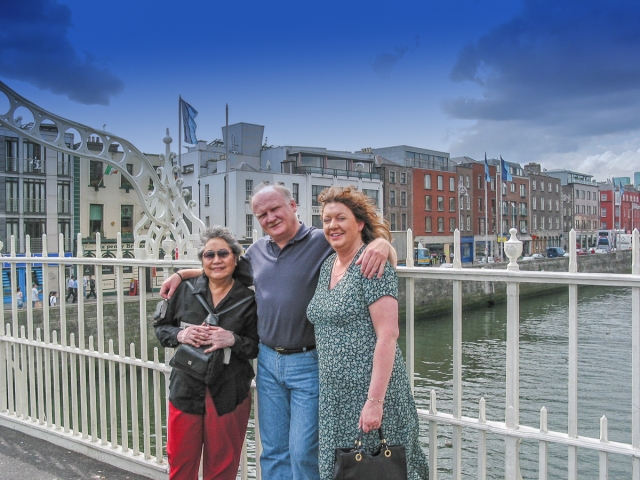 Henry, Geraldine and my wife on the Ha’penny Bridge over the River Liffy in Dublin (2002)

Henry and Geraldine and Henry’s son Paul visited us in 2006 and we drove to Reno for a few days, showing them a few places where my Irish-born great grandparents lived (Virginia City and Bodie) and attending a family reunion with some of my cousins who live in Carson City. We then drove from Reno to Las Vegas via the California side of the Sierras, stopping at Mono Lake, Bishop and the Alabama Hills. Henry, Geraldine and Paul then flew to New York from Las Vegas and we drove back home. 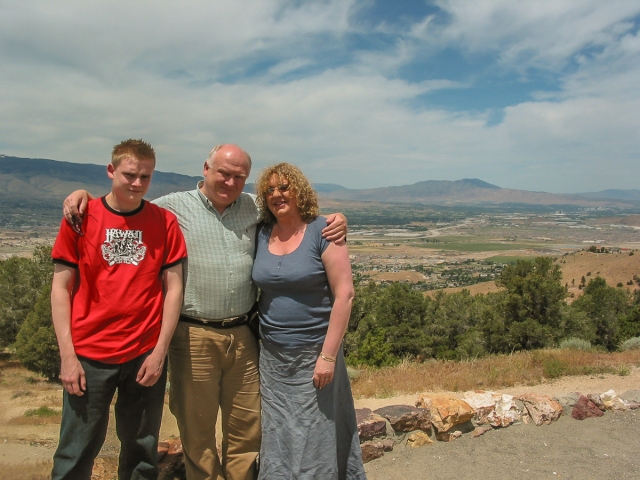 Paul, Henry and Geraldine at the Geiger Grade Lookout (State Route 341) between Reno and Virginia City. 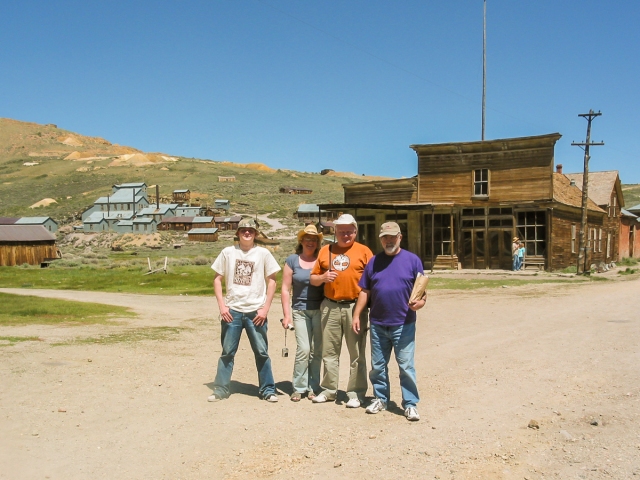 Paul, Geraldine, Henry and me at Bodie State Historic Park (2006). My grandmother and her family lived in Bodie in 1879 when she was eight years old.

Henry, Geraldine and Paul returned to the US in 2008 and we showed them more of California and Nevada — Tiburon, Napa Valley, Lake Tahoe. We drove to Las Vegas again but this time via the Nevada side of the Sierras and we saw a lot of sagebrush. 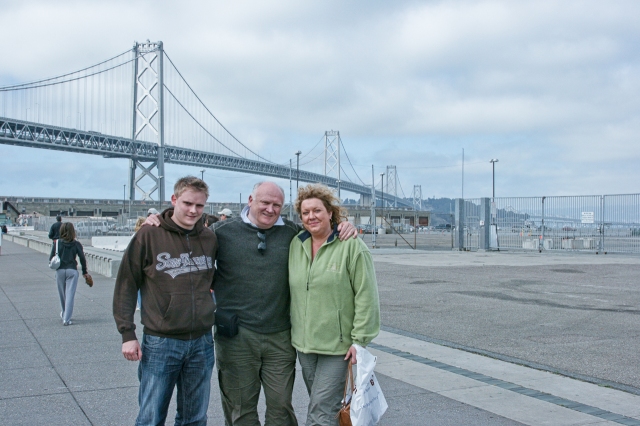 Paul, Henry and Geraldine and the SF Bay Bridge (2008). We were walking back to catch the BART after a Giants game at AT&T Park. 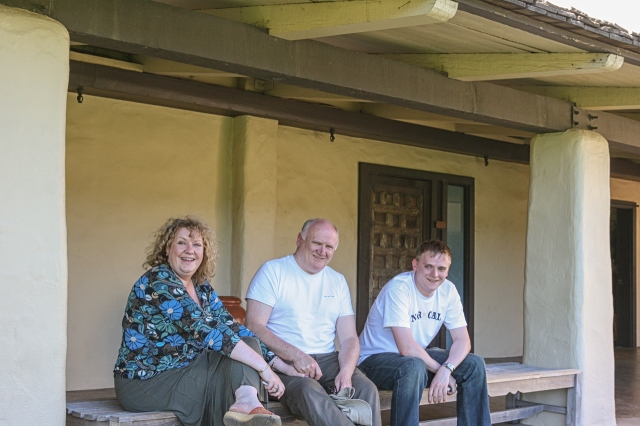 Geraldine, Henry and Paul taking a break after wine-tasting at the Robert Mondavi Winery in Napa Valley (2008).

In 2009 we flew to Dublin and Henry and Geraldine drove down to pick us up and drive us back to Holywood for four days. On the way to Northern Ireland we lagged for awhile in County Meath to visit Newgrange and the Boyne Valley. We also spent a day in Carlingford in County Louth during our stay. Then they drove us back to Dublin where we caught a plane to Milan. We stayed in Milan for four days and then took the train to Venice where Henry and Geraldine met us for a three day reunion. They then flew back home while we continued our Italy adventures with a train ride to Florence and another four days there before our final Italian destination in Rome where we spent a week. We then flew back to Dublin for one night and Henry and Geraldine drove down to have dinner with us. We flew back home the next morning. 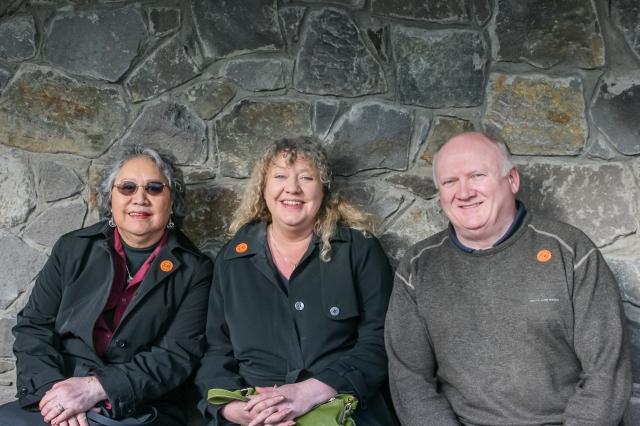 Henry and Geraldine and my wife at Newgrange (2009). 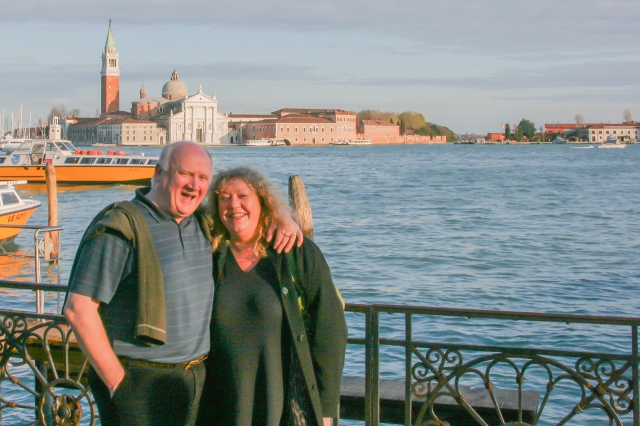 Henry and Geraldine at Piazza San Marco in Venice (2009).

Three years passed before our next reunion. In 2012 we flew to Switzerland and cruised down the Rhine River to Amsterdam where Henry and Geraldine met us for a three day post-cruise stay. We explored the Leidseplein district of Amsterdam during those three days and walked to Anne Frank’s house on one day and took the train to Leiden on another. They then flew home and we continued our European tour with mostly train rides to Germany and Belgium before returning to Amsterdam to catch our plane home. 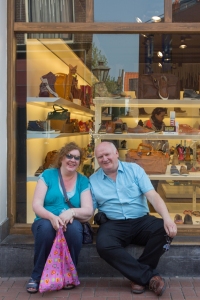 Henry and Geraldine resting during a shopping spree in Leiden — and waiting for my wife to finish her shopping (2012).

The following year we spent nine days in London, three of those days with Henry and Geraldine. We stayed in different hotels in Stratford City and explored London via the Tube to Westminster and central London and the DLR (Docklands Light Railway) to Greenwich. 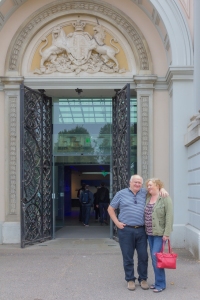 Henry and Geraldine at the entrance to the National Maritime Museum in Greenwich (2013). 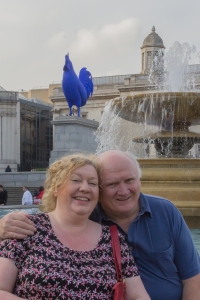 Henry and Geraldine at Trafalgar Square in London (2013).

We found ourselves the following April in Paris for three weeks and Henry and Geraldine again hopped across a couple of ponds to spend three days with us. This time they brought Henry’s sister Cynthia and her daughter Helen with them. They joined us in some of our Left Bank walks and we even went on a short cruise down the Seine one day. 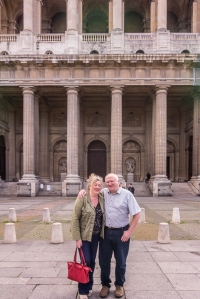 Henry and Geraldine in front of Saint-Sulpice, Paris (2014). 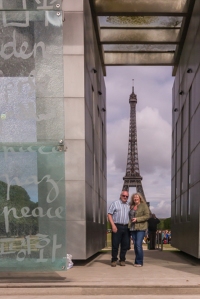 Henry and Geraldine and the Wall for Peace at the Eiffel Tower (2014).

And then we met again in Edinburgh this year. We found ourselves on the Royal Mile a couple of times and we took the city sightseeing bus one day. Another day we took public transportation to Rosslyn and Leith. We met Henry’s niece Rosie in 2009 and it was fun reuniting with her seven years later. 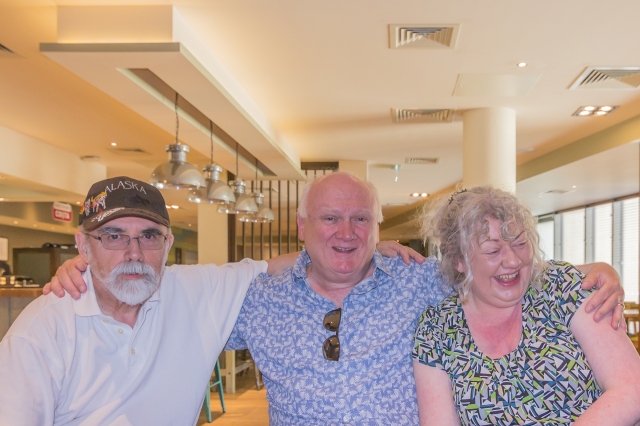 Henry and Geraldine and their American cousin, Edinburgh (2016). 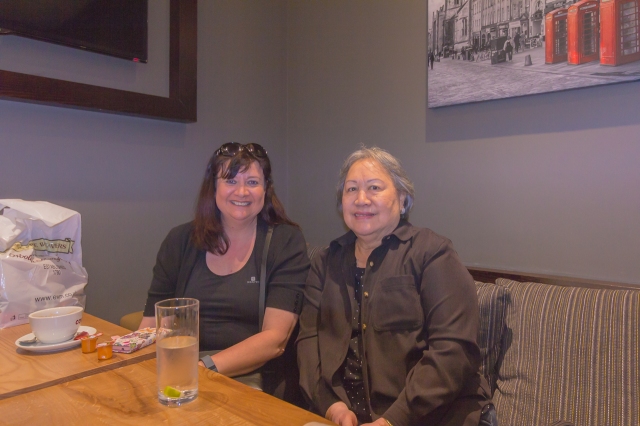 Henry’s niece Rosie and my wife at the Premier Inn, Edinburgh (2016).

Last year Rosie’s sister Claire vacationed in California with her family and we showed them bits of San Francisco, Sausalito and Castro Valley. We first met Claire and her family in 2002 and again in 2009. 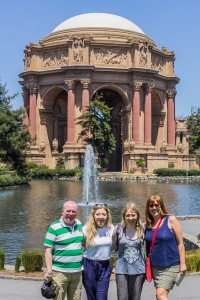 Henry’s niece Claire, her husband Peter and their twin daughters Ciara and Emma at the Palace of Fine Arts in San Francisco (2015).

We met other Muckle relatives on our travels to New York in 2007 and New Zealand and Australia in 2011.

We haven’t finalized our travel plans for 2017 yet. Maybe it’s time to go back to Ireland!