Posted on March 23, 2017 by crowcanyonjournal

After visiting Utah’s Capitol Reef National Park during the summer of 1994 we drove down state highway 12 to nearby Bryce Canyon National Park. It’s about 120 miles from Capitol Reef Visitor Center to Bryce Canyon Visitor Center. Unlike Capitol Reef and Zion you enter the park high on a rim that fluctuates between 8 and 9,000 feet above sea level. So you are looking down at most of the views. And most of the views include tall and thin stone pinnacles called hoodoos.

You won’t find any canyons in Bryce Canyon National Park but you will find several amphitheaters which extend for about 20 miles, the largest of which, Bryce Amphitheater, is 12 miles long, 3 miles wide and 800 feet deep.

View of an amphitheater full of hoodoos. 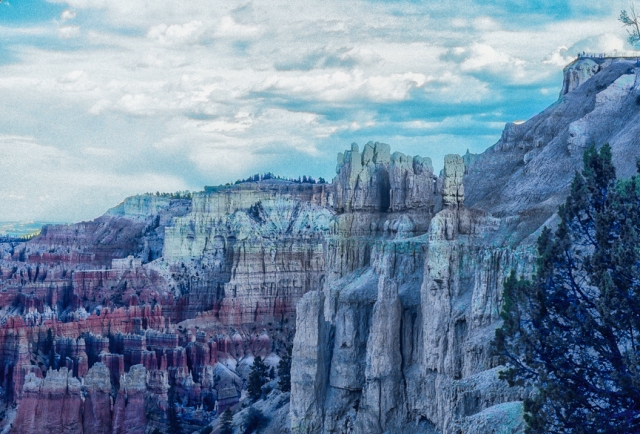 There are 13 viewpoints along Rim Road, the Scenic Drive. From this viewpoint you can see another viewpoint way up on the upper right.

Mormon pioneers began to settle in the Bryce Canyon area in the 1850s. A man named Ebenezer Bryce homesteaded in 1874 and the park is named after him. 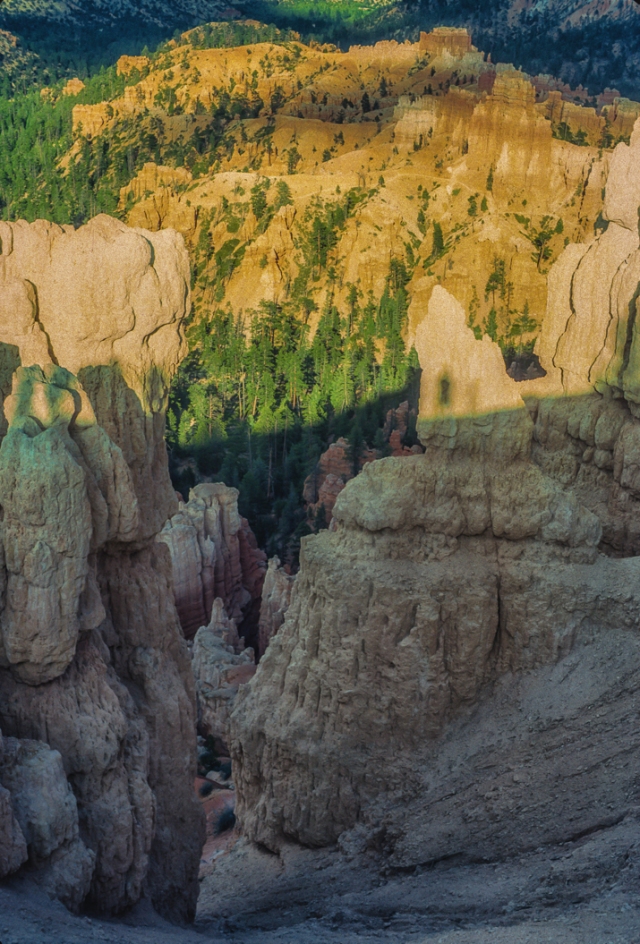 Half sunlight, half shadow.

Some of the deer we encountered in the park appeared to be rather tame and unafraid of humans.

Did you see the second deer hiding in the trees?

Sunlight on top of Boat Mesa.

Gazing at the colorful rocks.

Hoodoos and pine tree along the scenic drive.

Some of the hoodoos are more than 200 feet high.

Bryce Canyon became a National Monument in 1923 and was designated a National Park in 1928. The Rim Road was built in 1934 by the Civilian Conservation Corp.

After Bryce Canyon we visited Kodachrome Basin State Park and then drove on to Zion National Park. I’ll cover these two parks in my next two postings.

I am a family man with interests in family history, photography, history and travel.
View all posts by crowcanyonjournal →
This entry was posted in Travel and tagged Bryce Canyon, National Parks, photography, travel, travel photography, Utah. Bookmark the permalink.