Posted on April 4, 2017 by crowcanyonjournal

Our Irish cousins visited us in the Spring of 2008 and they asked us if they could experience a bit of our American Culture by attending a major league baseball game. So we rode on BART from Castro Valley to San Francisco’s Embarcadero Station and walked along the Embarcadero to AT&T Park to see the Giants play the San Diego Padres on a sunny Sunday afternoon. It was a great game. The Giants won and the cousins learned a lot about American traditions. And I took this shot during one of the significant times during the game. It will be my entry to Leanne Cole’s Monochrome Madness Challenge this week and her theme of Culture. 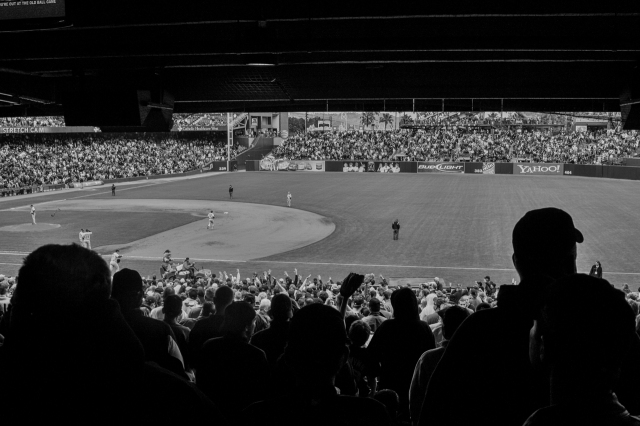 Observing a bit of Americana along with 40,000 other baseball fans. There are at least a half-dozen clues in the photo as to what was going on in the game when I took the photo. Can anyone guess the inning? The answer is in the second paragraph below.

Let’s look at some of the clues that point out during which inning I took the photo. First of all, there’s not much going on in the field, so we’re probably between innings or half-innings. Some of the San Diego players are on the field but not doing much. In fact, all nine players haven’t come on the field yet. That guy running between first and second is probably the left fielder. Another player has just emerged from the San Diego dugout. That’s probably the shortstop or another outfielder. Then there are the umpires. They are facing every which way. The one on the right is watching what’s going on on the huge center-field scoreboard (just out of the picture).

Next we notice that everyone in the stands is standing up and some near the field have their arms raised. That’s Lou Seal, the Giants mascot, riding around the field and he appears to be throwing things into the crowd. OK, two more clues: the ticker tape on the left between the upper and lower stands reads “Stretch Cam” and up on the top left of the photo is the bottom of a TV screen with the words “you’re out at the old ball game.” OK, I guess that everyone has guessed by now that I took the photo during the middle of the 7th inning when everyone stands and stretches and sings “Take Me Out to the Ballgame.” The Seventh Inning Stretch is as an American tradition as apple pie and Chevrolet.

Let’s glance at the ads on the left field fence for a moment to find some more evidence of American culture: our obsession with cars and gasoline (Chevron), one of our most popular beverages (Bud Light), nut snacks to eat with our beer (Emerald), and a top internet company from nearby Silicon Valley (Yahoo!).

A few years ago I posted some photo stories on our favorite walks around the world. Two of those walks occurred in Rome (see here and here), one was in Madrid (see here), and another in Kyoto (see here). Walk Number Five was the walk between the Embarcadero Bart Station and AT&T Park (see here). Most of those photos were taken on that day in 2008 when we brought our Irish cousins to the game. The color photo of the baseball field was taken while at my seat at the game along the first-base side of the stadium with my zoom lens at 100mm. The monochrome photo above was taken a few rows back with my lens set to 24mm.

Australian photographer Leanne Cole hosts the weekly Monochrome Madness Challenge. Drop by her website on Thursdays (Wednesdays in Europe and North America) to see what photographers from all over the world are doing in monochrome these days and how each of them interpreted Leanne’s Culture theme.