Why we went to Spain, Portugal and New York: An Overview of Our 2017 Vacation

Posted on June 10, 2017 by crowcanyonjournal

My sisters Betty and Marie are avid walkers and when they heard that my wife and I were interested in visiting the Camino de Santiago de Compostela this year they expressed an interest in joining us. But when they realized that neither my wife nor I planned to walk very much on The Way they changed their plans and signed up for a two-week Road Scholars tour that would allow them to walk 5 to 7 miles a day. So we then finalized our plans by agreeing to follow them and stay relatively close for the last nine days of their tour. Then we would all go to Porto for three days and finally stop off in New York City for four days on the way home.

View of Leon’s Plaza Major from our hotel window. Pilgrims on the Camino cut across the plaza on their way to the Cathedral one block to the right up the hill.

The Road Scholars tour began in and around Burgos for three days and then moved westward to Leon for three more days. We decided to start our own tour in Leon and booked our hotel rooms for the same three days that my sisters would be there.

View of a portion of the Camino from the Knights Templar Castle in Ponferrada. After our visit to the Castle we each had a beverage at this cafe and watched the tourists and pilgrims trudge up and down the hill. Just down the hill is an albergue and a restaurant that offers a Pilgrim’s Dinner for 10,90 euros.

After three days the Road Scholars tour moved on to Ponferrada for two days and then Sarria for one day. We decided to skip Sarria and spent three days in Ponferrada. 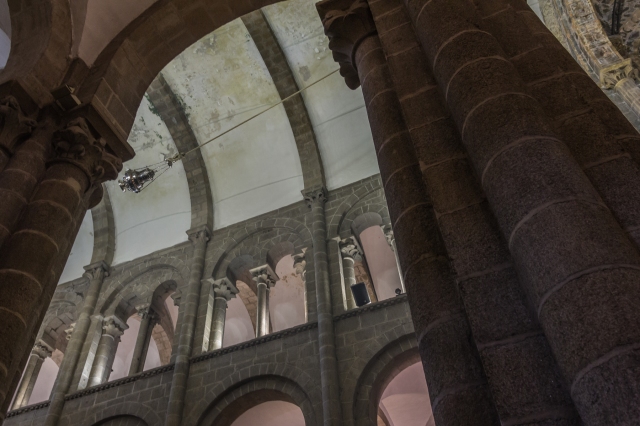 We attended the daily Pilgrim’s Mass at the Santiago Cathedral and witnessed the swinging of the largest censer in the world. The purpose of this ancient tradition was to overcome the stink of the pilgrims by dousing them with incense.

Pilgrims have been walking across Spain on the Camino for a thousand years. We felt a need to go there ourselves to understand why people from all over the world decide to take a month out of their lives to walk the 500 miles from St Jean Pied de Port on the French side of the Pyrenees to the Cathedral in Santiago. A few years ago we saw the Martin Sheen movie The Way and the Camino got on our bucket list. After our trip to Scotland last year the Camino became number one on the list.

Porto’s popular cruise boats go under six of the bridges that span the Douro.

My sisters thought it would be nice to relax for a few days after their tour before heading home and I suggested Porto, a scenic spot where you could relax with a glass or two of port wine by your side! Also, Our brother Jim recently visited Porto and heartily recommended it. 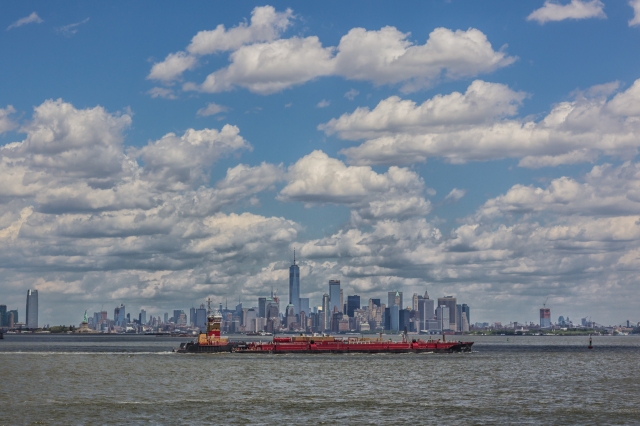 View of Manhattan from the Staten Island ferry. We found the street in Staten Island where our Theler ancestors lived more than a hundred years ago.

There were a couple of reasons for choosing New York for our final stop before flying home. NYC is one of my sister Betty’s favorite places to visit but my sister Marie had never been there before. Both sisters expressed interest in attending a Broadway show. My wife and I had a two-day stay there ten years ago after a New England / Canada cruise but really all we did was hop on and off a sightseeing bus for the two days. And we have been talking for years about breaking up the long flight home from a European trip with perhaps two flights, one to a spot on the East Coast and then one across the country to home. So we went to New York City for four days.

My sisters Betty and Marie with my wife at the luxury suite my sisters received after a leak was discovered in their closet and the hotel (Bryant Park Hotel near Times Square) had to close their room for repairs. They also sent up a bottle of a Napa Valley wine for the inconvenience!

3 Responses to Why we went to Spain, Portugal and New York: An Overview of Our 2017 Vacation