Posted on November 25, 2017 by crowcanyonjournal

OK, we walked all around the Cathedral and I showed you pictures of all four plazas (see here, here, here and here) and all four Cathedral facades. Now it’s time to step inside and see what the Cathedral’s interior looks like.

We began our tour by visiting the cloister on the cathedral’s south side and then we entered the Cathedral from the cloister entrance. 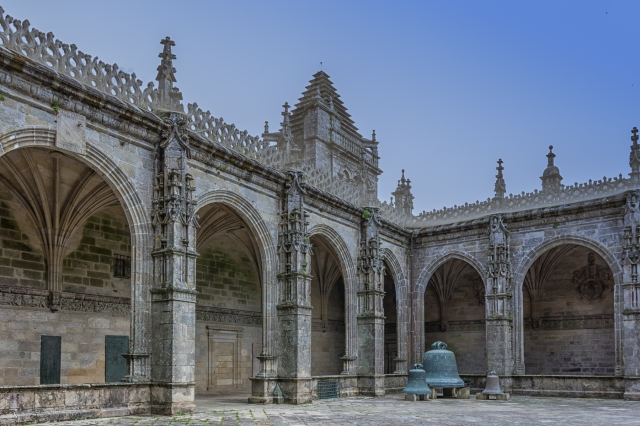 The two bells on the left used to be attached to the clock in the clock tower. The large bell is called the Berenguela and was cast in 1733. Both bells cracked and were replaced in 1990. 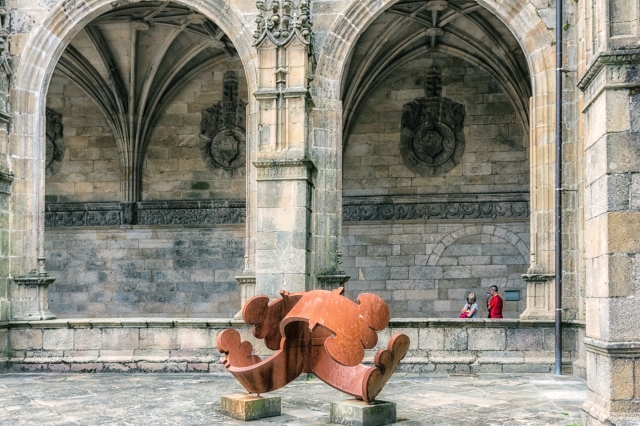 The couple on the right are listening to handheld audio devices provided for the self-guided tours.

The Portico of Glory was constructed at the west entrance to the Cathedral in the 12th century. It is considered one of the greatest Romanesque works of art in the world. A baroque façade was constructed in front of the Portico of Glory in the 18th century. Both facades are now undergoing a major restoration and are hidden from the public. From the outside all you see is scaffolding and from the inside a curtain hides the view of the triple archway with its fantastic sculptures. 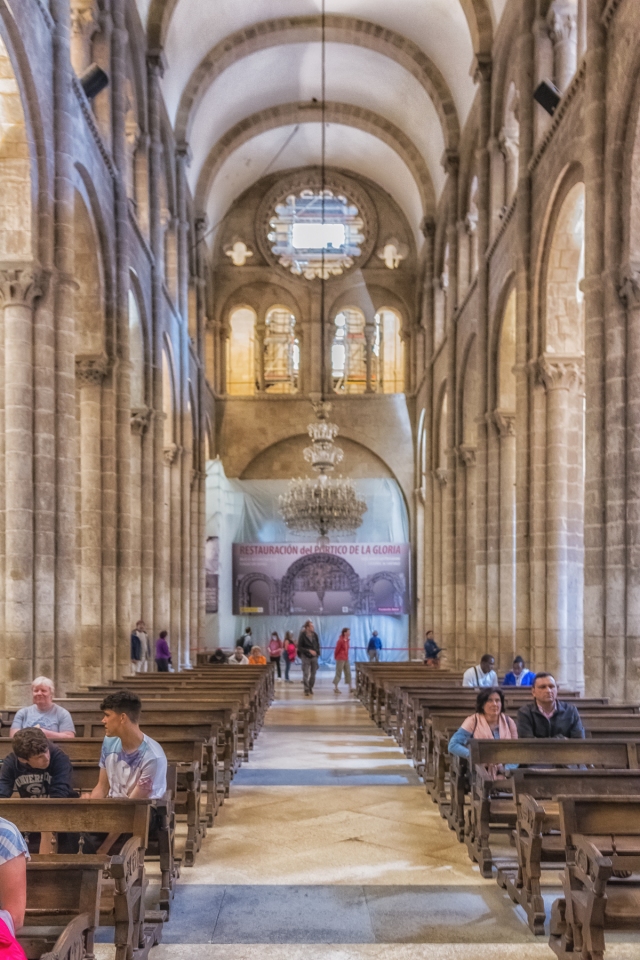 Looking west down the Cathedral’s central nave from the main altar. The western entrance to the cathedral was completely closed because of the major restoration project that is not planned to be completed until 2020.

The current restoration project extends to the cathedral’s dome and high altar. 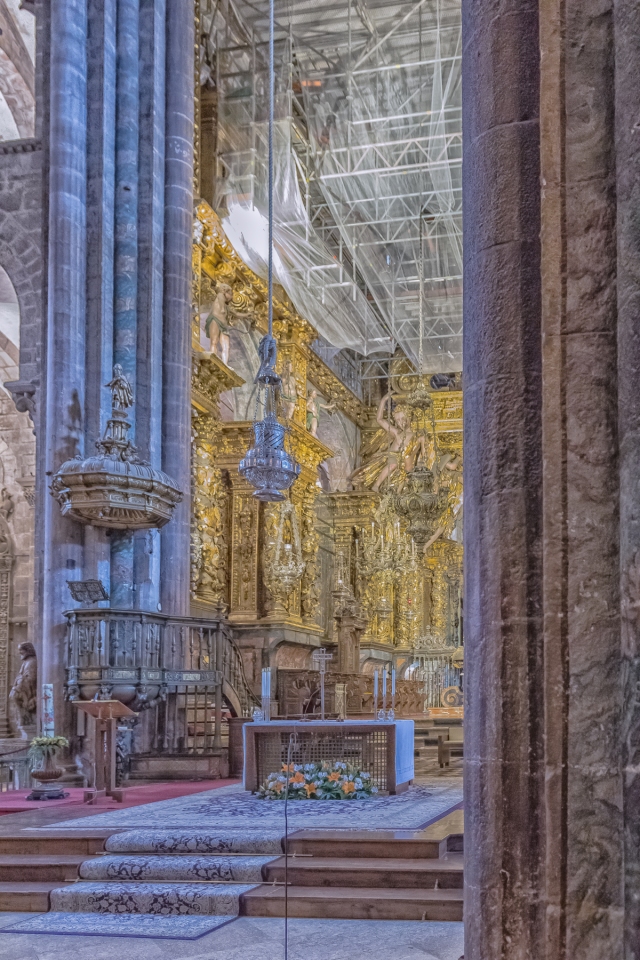 The Cathedral’s main altar was constructed in the 17th century in the baroque style. Plastic and scaffolding block the view of about half of the high altar.

In several of the altar shots I had to fuss with the white balance, adding blue to tone down the glitter.

One of two bronze pulpits that flank the main altar. They were built in the 16th century. 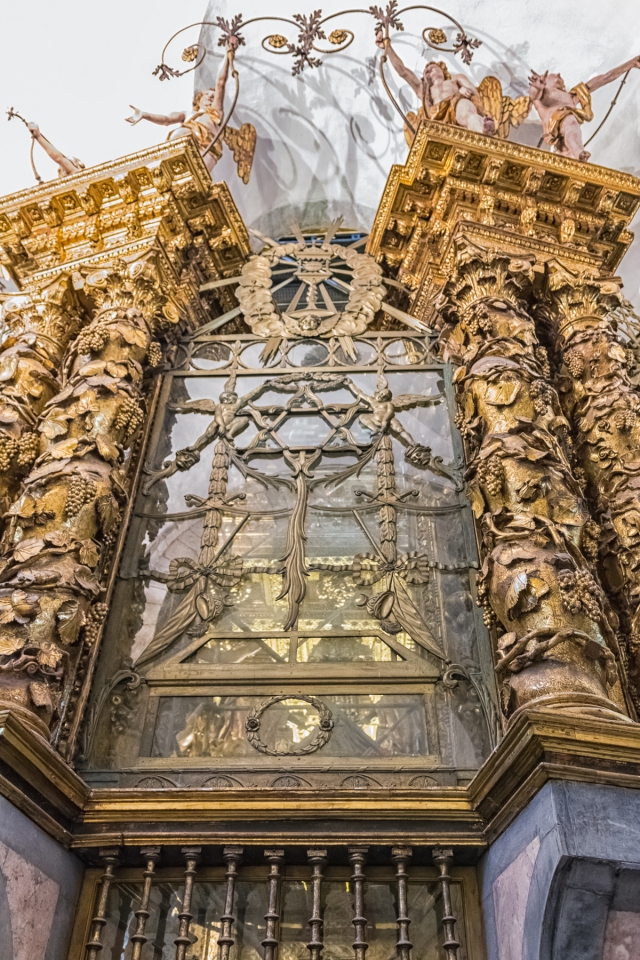 Baroque decor of the ambulatory that surrounds the main altar.

Intersection of central nave with the north transept.

Inside the north transept façade.

There were originally seven chapels in the Romanesque cathedral of the 12th century. Over the centuries these chapels have been remodeled and extended and additional chapels have been constructed all over the cathedral but mostly along its northern nave. The cathedral presently contains 24 chapels. Here are some photos of some of the most prominent ones.

The Chapel of Pillar was completed in 1723 in the Baroque tradition. 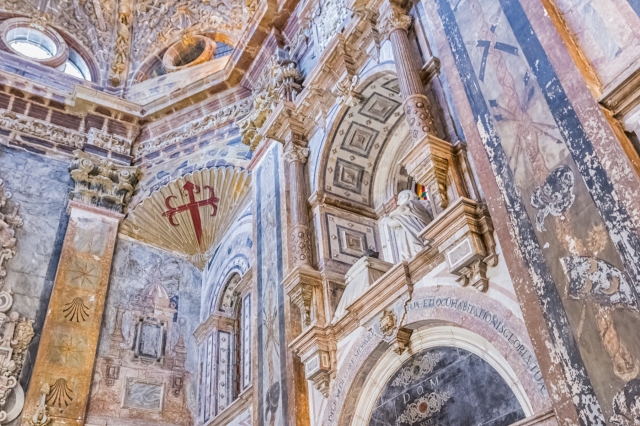 One of the walls of the Chapel of Pillar.

The Chapel of St. Peter

The chapel of the Savior is the oldest of the chevet’s seven chapels. The stone altarpiece was built in the 16th century. 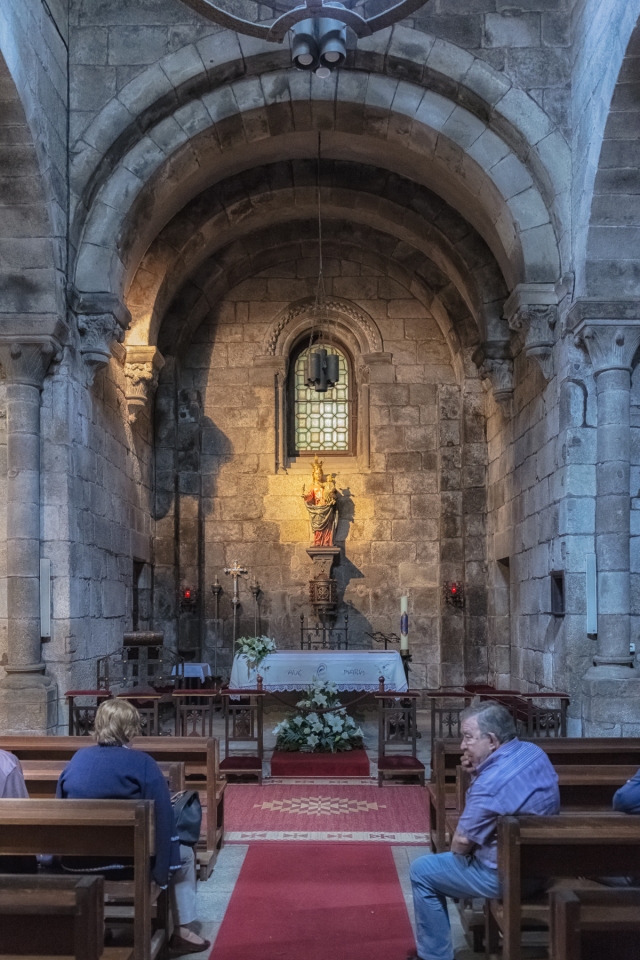 The Church of the Corticela was built in the 9th century and connected to the Cathedral in the 13th century. The statue over the altar in the main chapel is of Our Lady of Consolation.

Sorry but I don’t remember in what chapel I came across this statue of Mary. 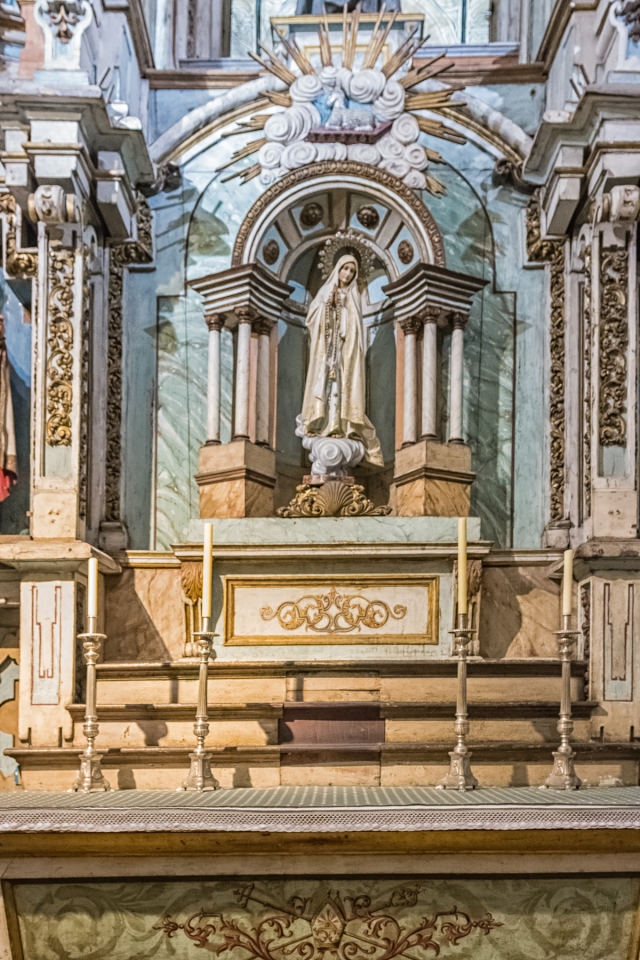 St Anthony Chapel altarpiece was built in the 18th century.

Sculpture of Santiago Matamoros presides over the Chapel of James the Knight. Flowers now cover the headless bodies and bodyless heads that may otherwise offend Muslim visitors. 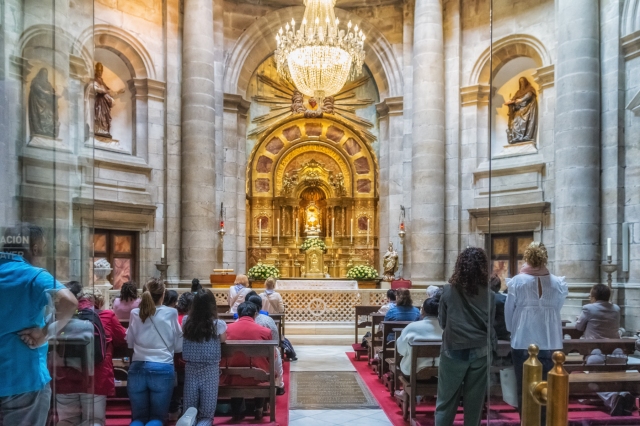 The Communion Chapel was built in the neo-classical style. It is located on the north side of the central nave. 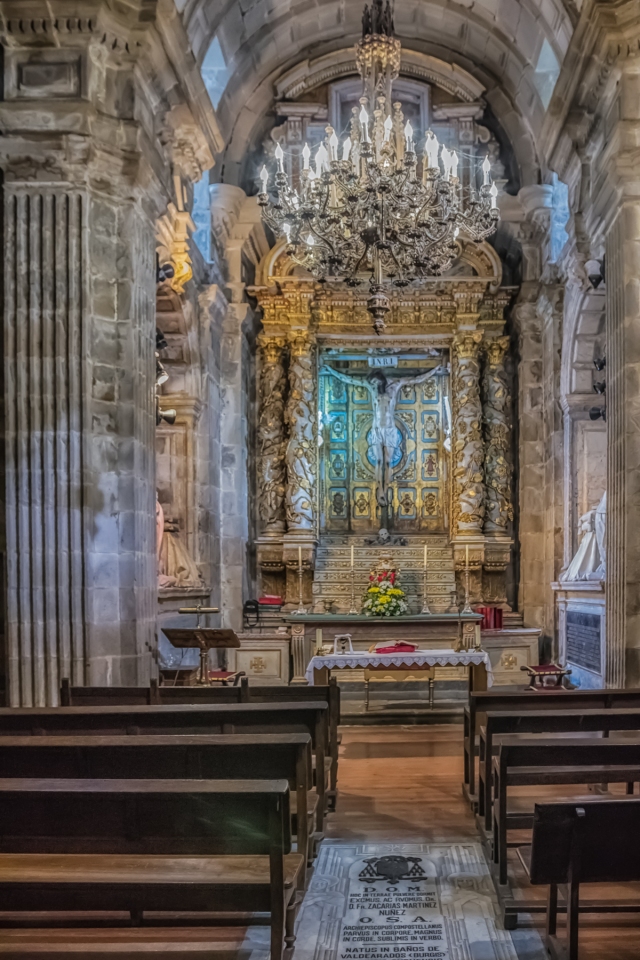 Chapel of Saint Christ of Burgos was built in the 17th century..

This was our last day in Spain. The day after we toured the Cathedral we boarded a bus to Porto where we stayed for three nights. I’ll be blogging about our stay in Porto over the next few weeks.

2 Responses to The Santiago Cathedral’s Interior