Posted on July 23, 2018 by crowcanyonjournal

Two Lovers Point is one of the most popular tourist attractions in Guam and we have gone there evey time I have visited Guam. My entry for this week’s Monochrome Madness Challenge is this photo of the 22-foot brass statue of the two lovers in the Chamorro legend who tied their hair together and jumped off the steep 400-foot cliff to their deaths to avoid being captured by Spanish soldiers and the woman forced to marry a Spanish officer. 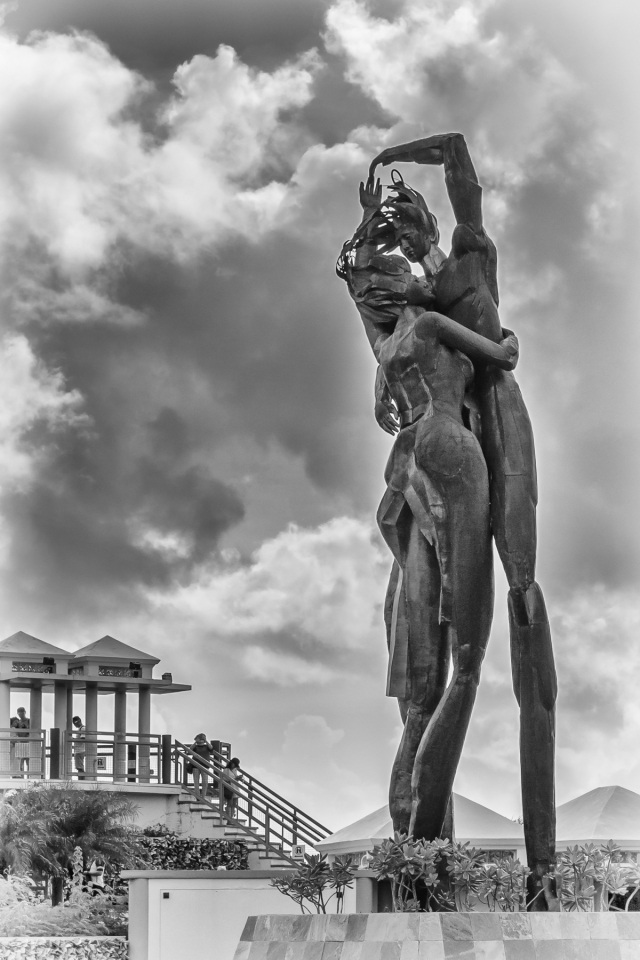 The brass statue of the Two Lovers at Two Lovers Point (Puntan Dos Amantes) north of Tumon Bay in Guam. In the background is a portion of the two-tiered viewing platform at the edge of the steep cliff.

The statue was originally commissioned in 1985 by then first lady Madeleine Bordallo who is now Guam’s delegate to the US Congress. In 2002 super typhoon Pongsona toppled the statue and it was deemed unrepairable and sold for scrap. Eleven years later a woman named Nancy Barnhouse heard about the plight of the statue and began a two-year search for it, finally finding it in the Green Guam Corporation scrap yard. Moses S. Chong, owner of GGC, bought the statue for scrap but didn’t have the heart to melt it down and so it stayed in his yard slowly rusting away. Nancy and her husband Dave who own Island Certs Corporation, a heavy equipment rental company in Tamuning, bought the statue and hired a specialized welder named Armando Nazareta to spend several months bending the pieces back to shape and polishing and reassembling them and in 2015 the statue was re-installed back at Two Lovers Point.

Australian photographer Leanne Cole hosts the weekly Monochrome Madness Challenge. Drop by her website on Wednesday (Tuesday in North America and Europe) to see what Leanne and other photographers from all over the world are doing in monochrome these days.

Two Lovers Point (Puntan Dos Amantes in Chamorro)  is just north of Tumon Bay where most of the hotel resorts are located in Guam. You get a terrific view of both the ocean and Tumon Bay from the platform overlooking the cliff where the two lovers leaped long ago.

See here for more information about the old story of the Two Lovers and the recent story of the rescue and re-installation of the statue by the Barnhouses.

I’ll have more photos of our latest visit to Two Lovers Point in my next posting.