Posted on October 27, 2018 by crowcanyonjournal

On our way home from vacationing in Spain and Portugal last year we stopped for four days in New York City before flying back to California. On one of those days my wife decided to do some shopping in the Bryant Park vicinity while my sisters and I walked around Manhattan. The first leg of our walk took us to the NY High Line (see here). Then we rode on the subway to Central Park West and W 72nd St., walked across Central Park and then down 5th Avenue and back to our Bryant Park hotel. Along the way we came across St Patrick’s Cathedral and I decided to visit the church and take some pictures.

One of the cathedral’s twin spires.

Archbishop John J Hughes of New York commissioned the architect James Renwick, Jr. to design a grand neo-Gothic cathedral in 1853. The foundation was laid in 1858 but construction was delayed because of the Civil War and the cathedral wasn’t completed until 1879. It is the largest Catholic church of the Gothic Revival style in North America (The Basilica of the National Shrine of the Immaculate Conception in Washington, D.C. is the largest Catholic church of any style in the country).  With its twin spires reaching 330 feet it is also one of the tallest churches in the country (it’s even a few feet higher that the National Shrine).  Now it is dwarfed by the skyscrapers that surround it. 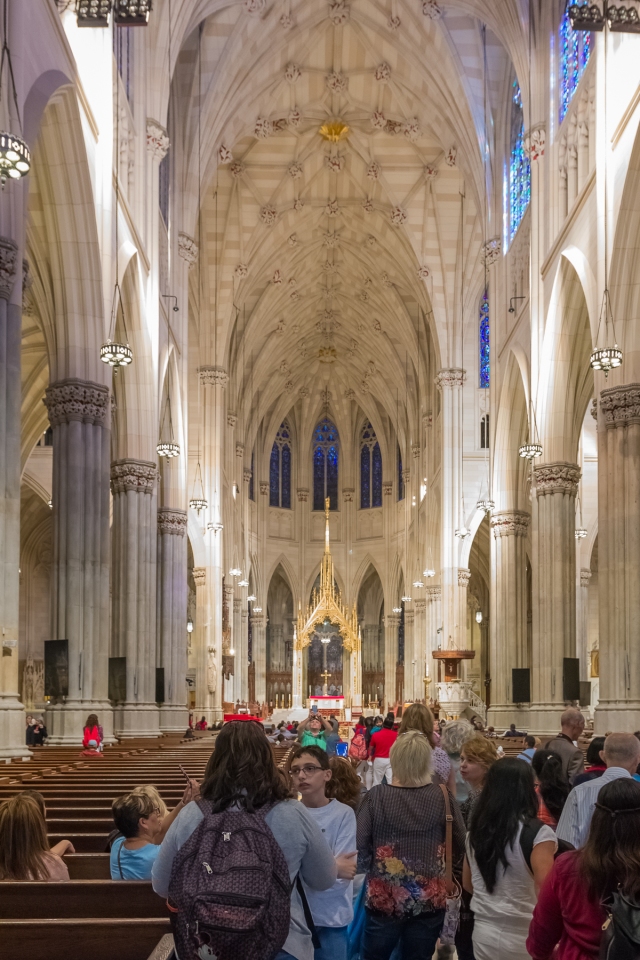 Inside the cathedral’s main portal. Renwick’s design was inspired by the Cologne Cathedral. 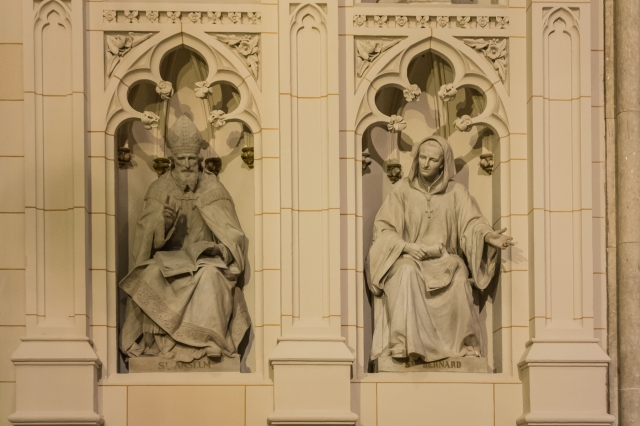 The altar area has been raised and enlarged during several restorations over the years. The original altar can be found in Fordham University.

View from behind the main altar. The rose window, organ and main entrance are in the background. 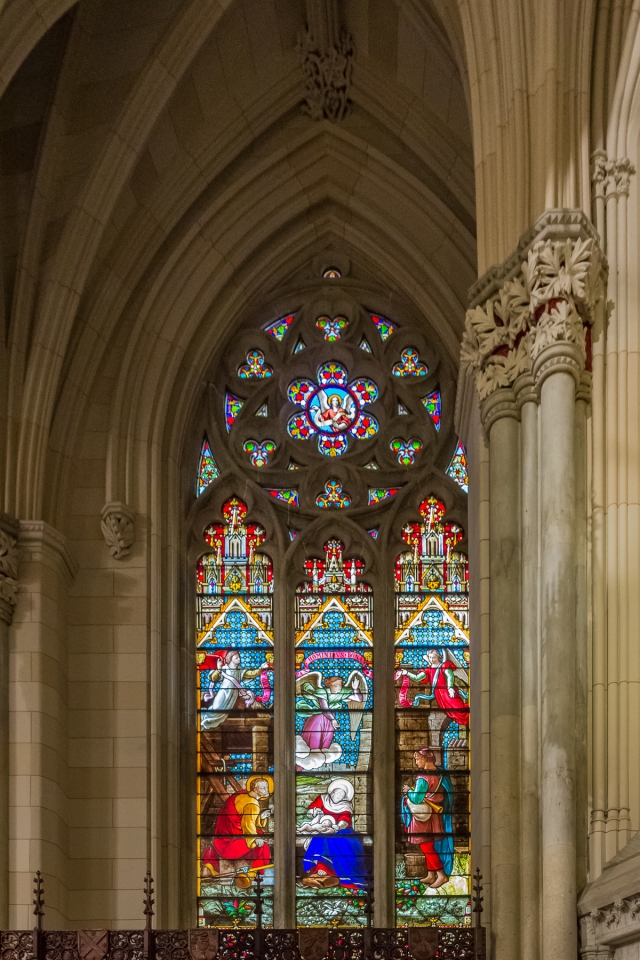 An example of the cathedral’s stained glass windows. 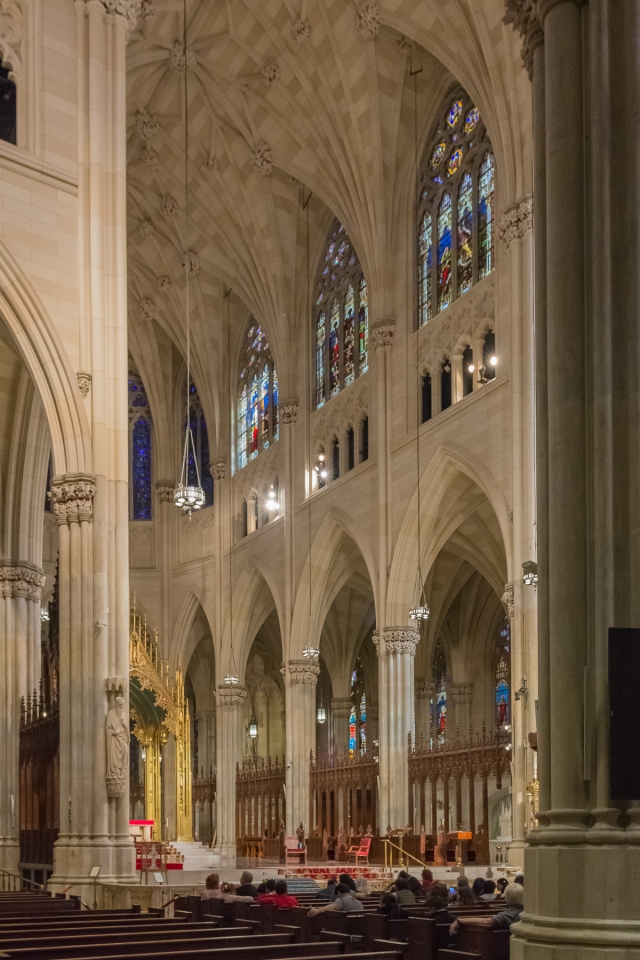 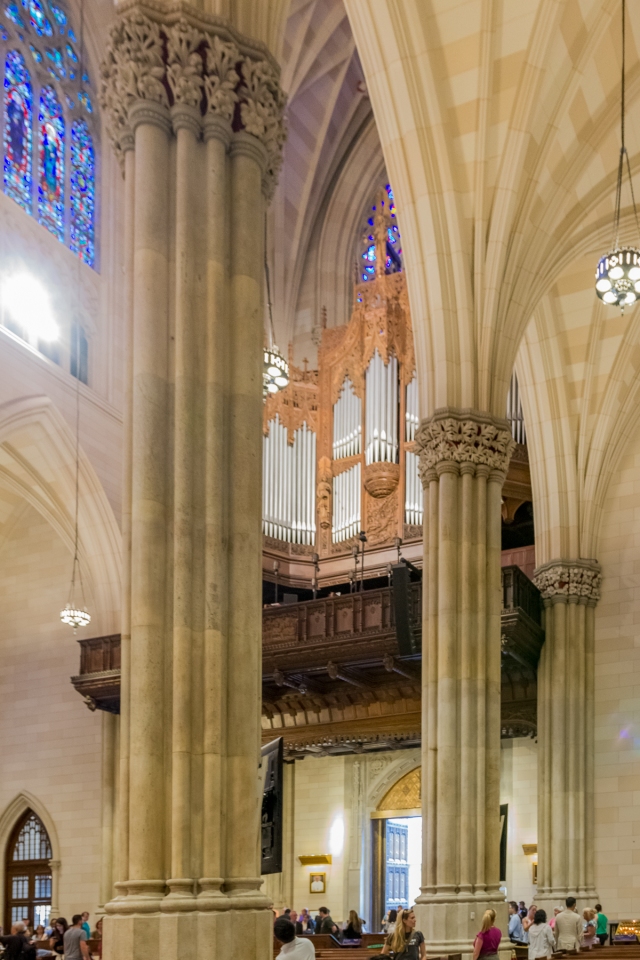 The cathedral’s organ just inside the main entrance. It’s been around since 1930.

St Patrick’s takes up the entire block on the east side of 5th Avenue between 50th and 51st Streets. Rockefeller Center is directly across the street.

View from the cathedral’s steps across 5th Avenue of the Atlas statue in front of Rockefeller Center. The bronze statue was created by Lee Lawrie and installed in 1937. It’s been featured in nearly every episode of 30 Rock and is also the symbol of the objectivist philosophy of Ayn Rand, author of Atlas Shrugged.

Our Manhattan walk continued for ten more blocks until we reached Bryant Park. Our tour of New York continued when we ventured to Times Square after dinner that night. See my next posting for photos of neon New York.

We flew back to San Francisco the next day.