Posted on June 6, 2019 by crowcanyonjournal

I first posted this article five years ago and am reposting in honor of my Dad’s cousin George and everyone else who participated in D-Day 75 years ago today.

My Dad’s cousin George jumped into Normandy on D-Day, 70 years ago today.

George is the youngest son of my grandfather’s younger brother Everett. His full name is George Duncan Dwyer (Duncan is his mother’s maiden name) but his buddies in the 101st Airborne called him Doc. He was a mid-generation guy, born in 1922, 12 years after my Dad and 17 years before me. His sisters were all a lot older than him. George lost both of his parents when he was pretty young and he was then raised by his older sister Margaret and his Aunt Caroline. And soon after high school graduation he joined the Army.

I visited George and his wife Gloria several years ago at his home in Fallbrook in northern San Diego County. Over lunch he told me his story.

George was a paratrooper in the HQ Co, 3rd Battalion, 506th Parachute Infantry Regiment, 101st Airborne Infantry Division. A Screaming Eagle. He jumped into Normandy on June 6, 1944 a few miles inland from Omaha Beach. The fighting was severe and his unit suffered heavy casualties. Three days after his jump he was captured by the Germans and placed in a concentration camp. The Army said he was MIA. But George and a buddy soon managed to escape from the Germans only to run into a French Resistance group while they were looking for their own unit. They had no choice but to join the French Resistance and because of their marksmenship they were given the job of snipers and told to kill as many German officers as they could find. After a while it became obvious to George and his buddy that the leader of the Resistance was going insane and when he started killing his own men the two Americans decided it was time to escape from them and resume their search for their own unit. And so they did. George was with his unit in southern Germany when the war ended.

After the war George got into the oil business and his job took him all over the world — wherever an oil field was being developed. He worked in Texas, Wyoming, California, South America, North Africa. George’s wife and their son Danny lived in Majorca while he was working in Africa. Throughout his career George’s plan was to return someday to southern California and live in an avocado orchard. And so he began to save for that dream to come true and eventually he purchased his orchard and after his career was over George and Gloria retired to their avocado ranch in Fallbrook, not far from Camp Pendleton. And then he started getting involved with various MIA and POW organizations in southern California.

One night a few years ago I got into my car to drive home after a meeting and turned on the radio to listen to the Giants who were playing the Padres down in San Diego. I was just in time for the National Anthem and there was George’s voice loud and clear. It was one of those San Diego games where the military was being honored and in this particular evening the honor was going especially to the MIAs and the POWs and George, who was active in both organizations, was chosen to sing the Star Spangled Banner. He also sang God Bless America that night during the 7th inning stretch. George sang those songs the way they are supposed to be sung and he received quite an applause.

Today we honor cousin George and all of his buddies who called him Doc and all of the Americans, British, Canadians and Australians who were involved in the Normandy Invasion, thousands of whom gave their lives on what is often called the Longest Day in history.

Postscript: We traveled to southern California in the Summer of 2003 to see if we could find some members of my grandfather’s brother Everett’s family. We met George’s sister Dot in Santa Barbara on that trip and her daughter Joan in Hemet. We also found George Dwyer Sweeney, son of George’s sister Margaret, in Pasadena and his brother-in-law Don in Riverside. We had dinner one night with Sue, daughter of George’s sister Pat, at her Santa Ynez home and on another night with Danny, George’s son, at a restaurant in Temecula.  And we met George and his wife Gloria at their avocado orchard home in Fallbrook. 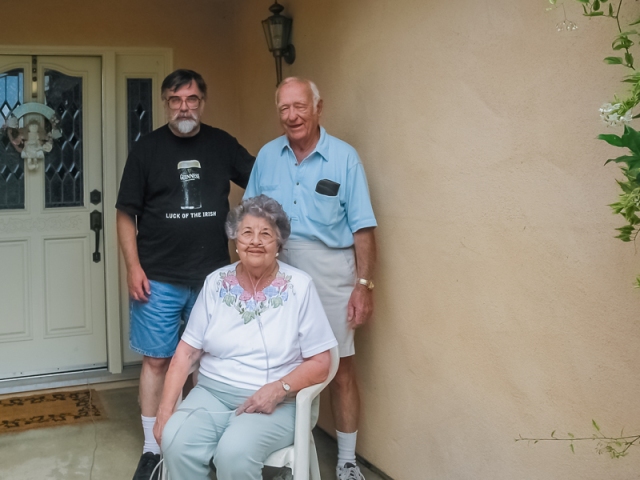 George and Gloria in front of their Fallbrook home. That’s George’s first cousin once removed on the left.

7 Responses to D-Day and Cousin George