Ireland 2019: The Rest of the Ulster Museum

Posted on September 28, 2019 by crowcanyonjournal

Believe it or not, we actually saw other things in the Ulster Museum that had nothing to do with the Game of Thrones. Unless, that is, these dinosaurs are considered cousins of dragons: 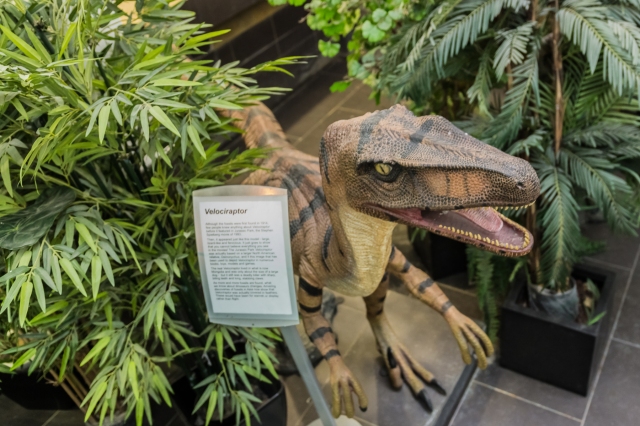 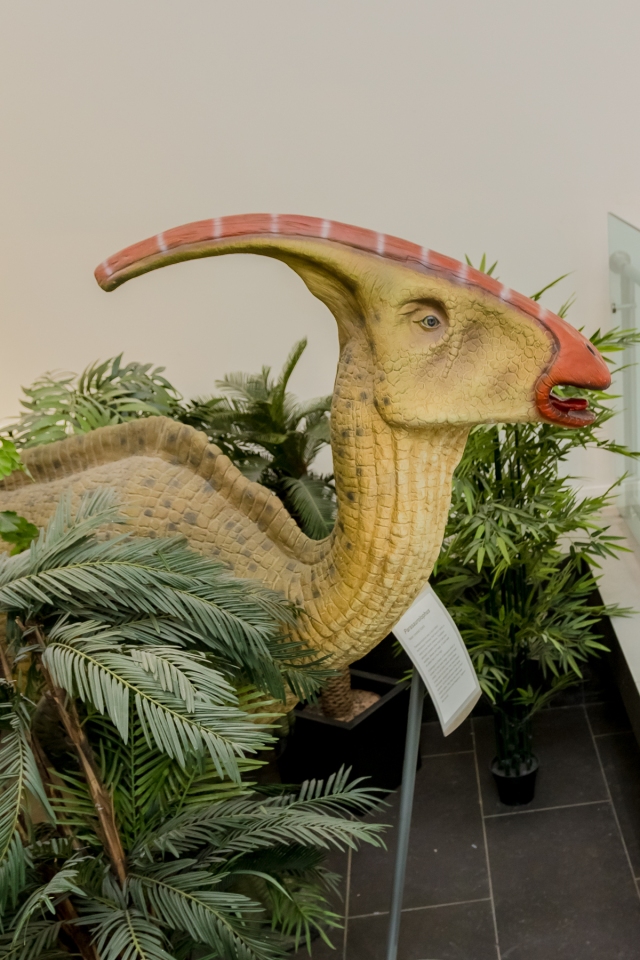 A parasaurolophus. These dinosaurs roamed around North America 73 million years ago. 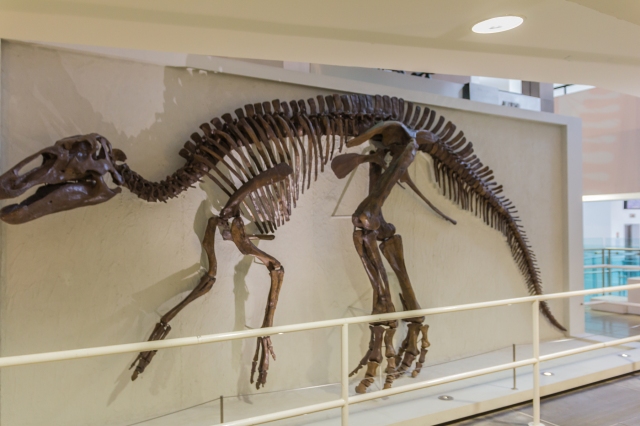 These dinosaur displays are a portion of a three-level exhibit called Window on Our World.

The Ulster Museum is the largest museum in Northern Ireland. It is located at the Botanic Gardens in Belfast just a few blocks from Queens University in the Queens Quarter and has around 8,000 square meters of public display space. In October 2006 the museum was closed for major renovations and did not reopen until 2009. Visitors were then greeted with a modern museum organized into several zones that spread throughout four levels.

The main lobby on the museum’s first floor is called the Welcome Zone. A café and a bookstore – gift shop are also on this floor.

An entire exhibit in the History Zone is devoted to the explanation of  The Troubles that occurred in Northern Ireland during the last three decades of the 20th century. The Troubles exhibit can be found on level one while the rest of the History Zone is on level two. Another interesting history exhibit tells the story of La Girona, a ship in the Spanish Armada that sank off the Antrim coast in 1588. 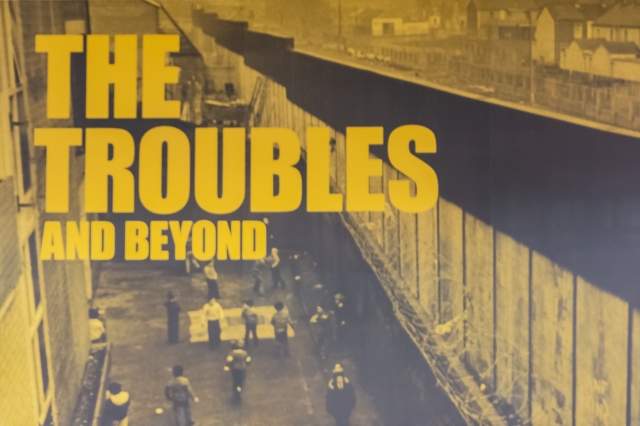 My wife and I spent about an hour examining this exhibit. One of the displays was situated so that you had to watch a video on the Troubles in Belfast while standing. We had to ask a museum employee for a chair so my wife could sit and watch. More than 3500 people were killed during the Troubles in Northern Ireland. 1500 of these died in Belfast. 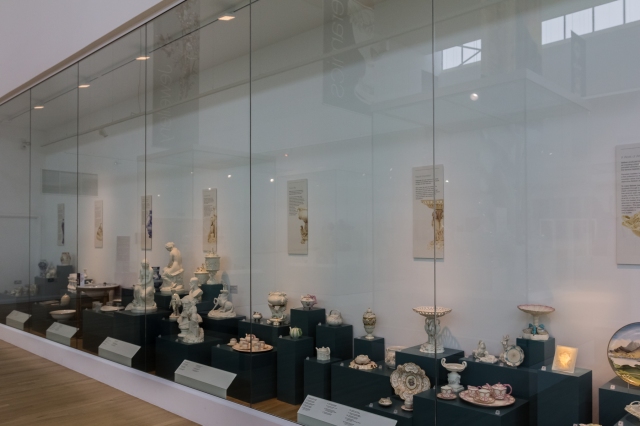 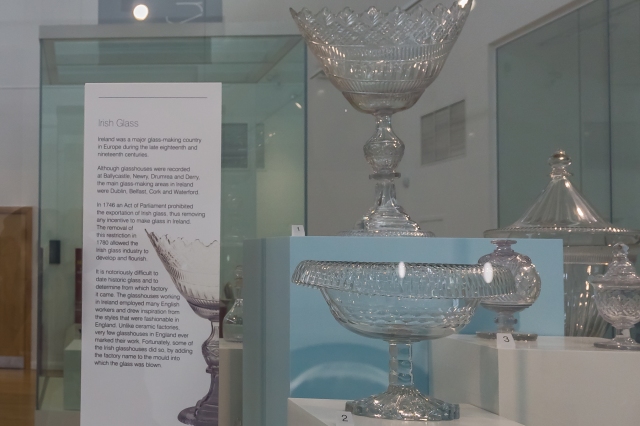 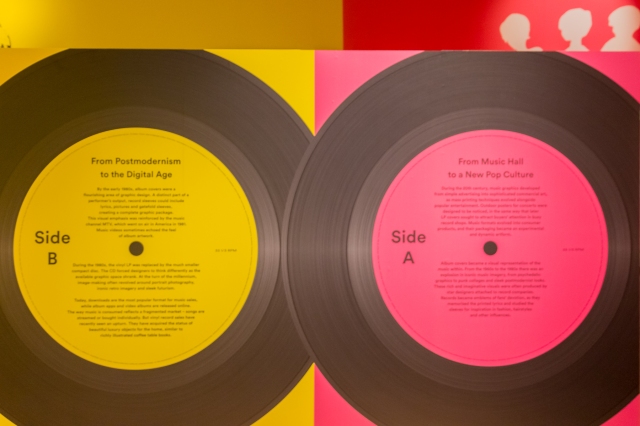 Remember when music came to us in vinyl?

The museum’s Art Zone on levels three and four contains nine galleries plus an interactive Discover Art room. One of the galleries presented an exhibit of women print artists called Making Her Mark. This exhibit contains more than 50 etchings, lithographs, lino prints and wood-engravings. 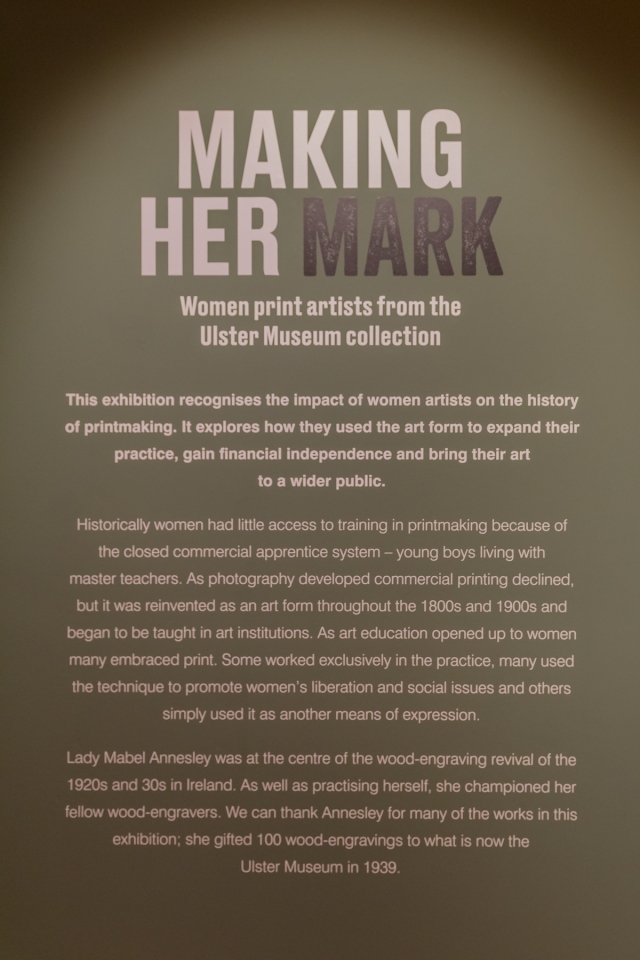 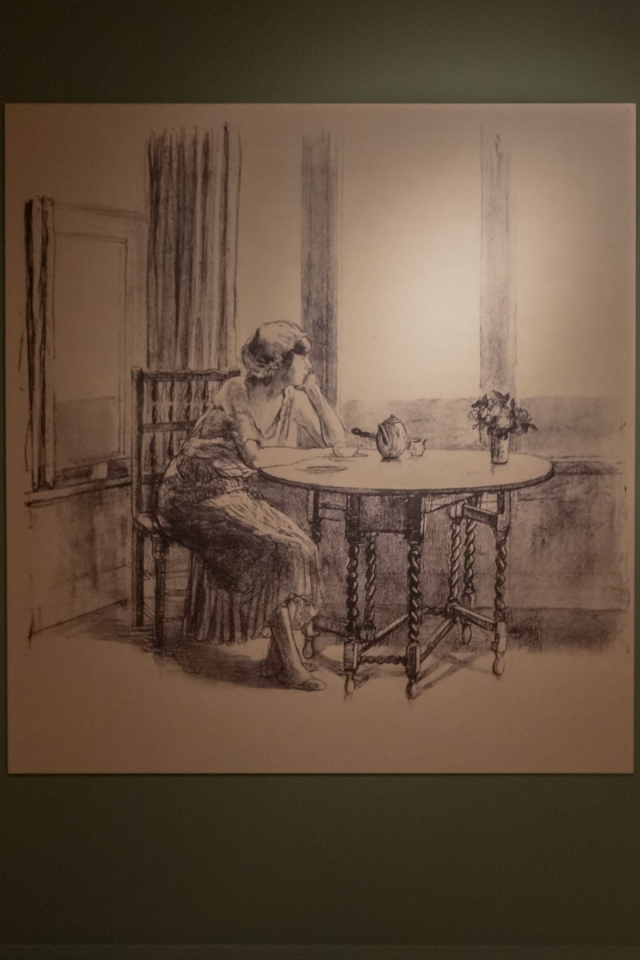 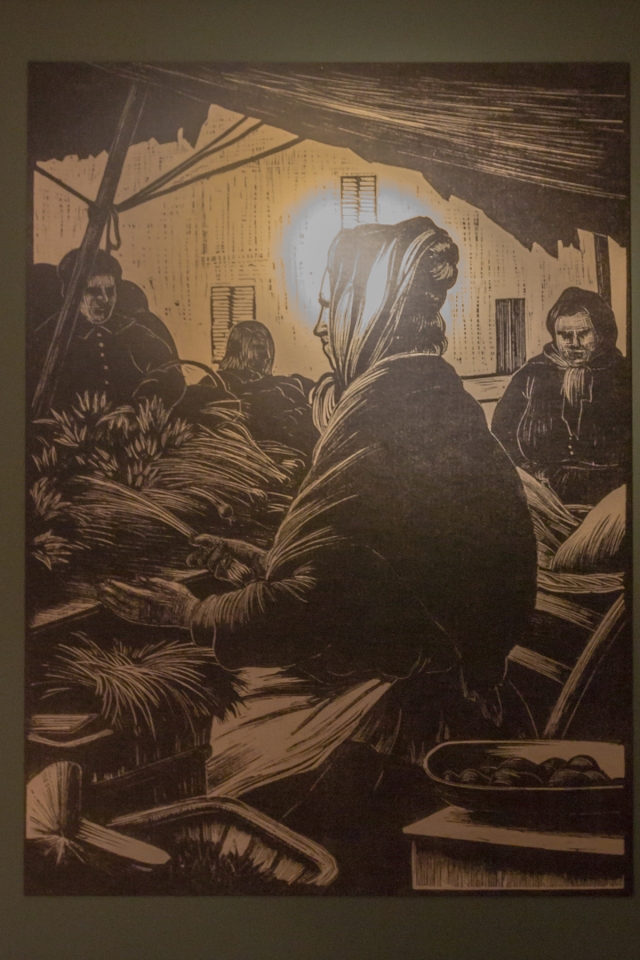 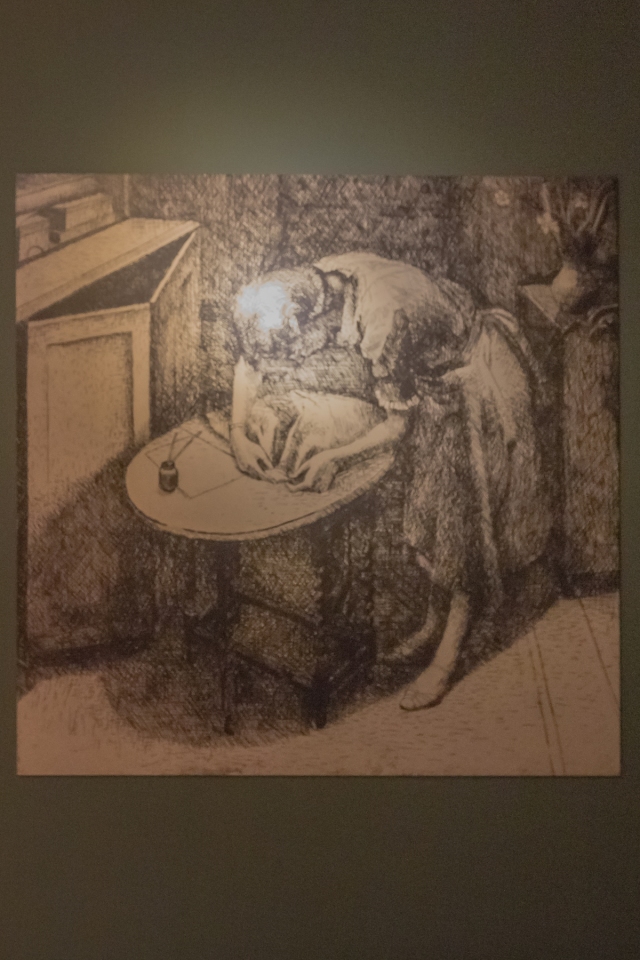 Print by Doris Violet Blair from around 1940.

Another gallery concentrated on Irish Art after 1870. 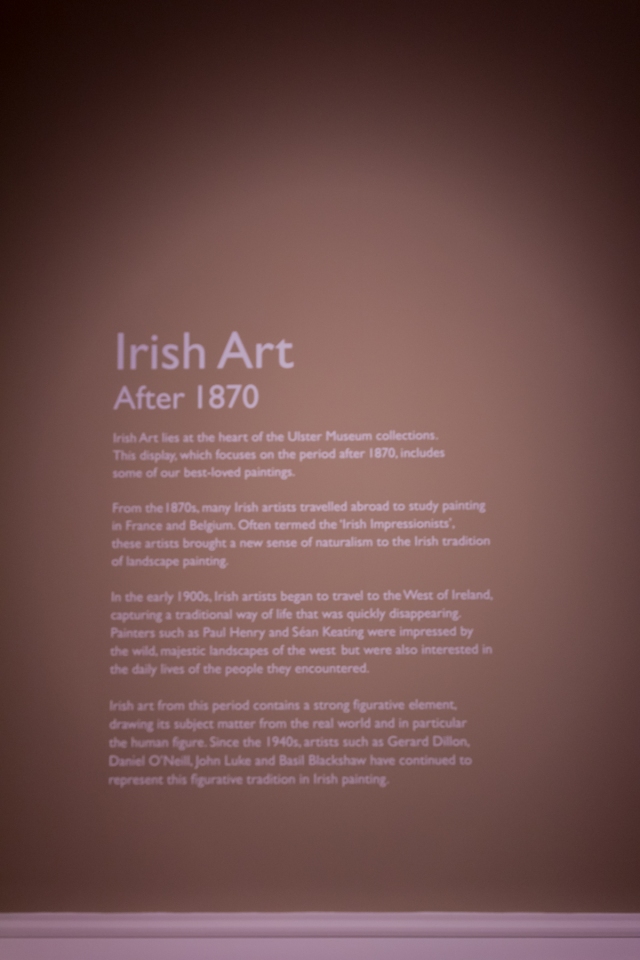 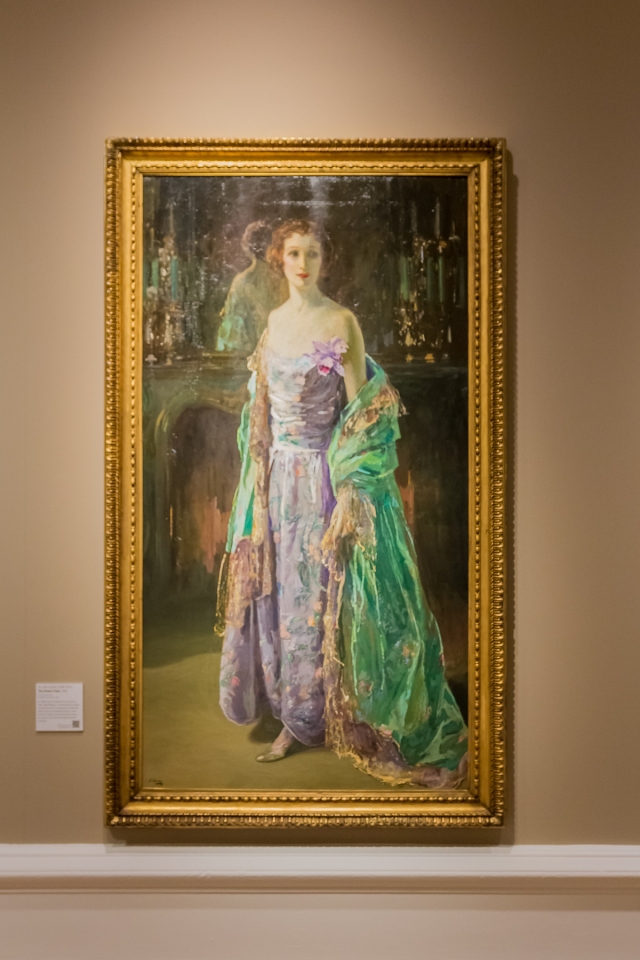 The museum’s Nature Zone is mostly on level three. One display covers animals that are found in Ireland while another concentrates on those that are close to extinction. Then there’s an exhibit on fossils of animals that became extinct long ago. There are also exhibits on some of our earth’s past ages and on the elements found on, over and under our earth’s surface. 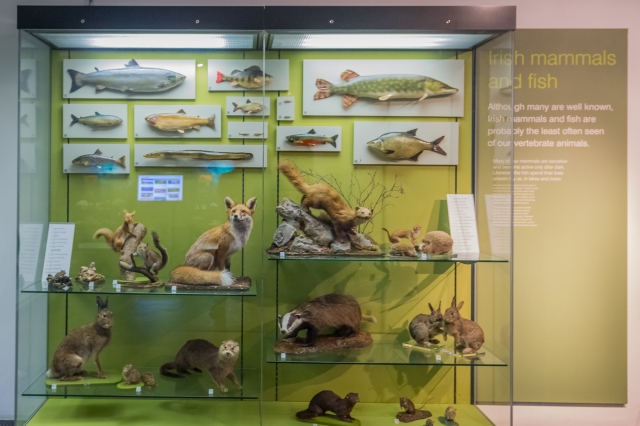 Animals you might find in Ireland if you looked hard enough. You don’t have to look too hard to find sheep, cattle, sheep, horses and sheep.

A few years ago the Ulster Museum teamed up with the Folk and Transport Museums in Cultra and the Ulster American Folk Park in Omagh to form the National Museums  Northern Ireland. You can find out more about NMNI here.

Oh, I almost forgot: there is no admission fee to the Ulster Museum. Collection boxes for suggested donations are placed strategically close to the museum’s entrances and exits, however.

We strolled through the Botanic Garden before and after visiting the Ulster Museum. I will show photos from that stroll in my next post.

Bonus — The Music of Phil Coulter

Songwriter-record producer-orchestra conductor-piano player-singer Phil Coulter was born in Derry in 1942 and 77 years later is still performing. His song about growing up in Derry called The Town I Loved So Well is recognized as the best song to come out of the Troubles (you can find Luke Kelly’s version of the song in my first Ireland 2019 post here). Some of his other songs include Congratulations, Puppet on a String, Steal Away, Ireland’s Call, and I Can Only Give You Everything. In the 60s and 70s he teamed up with Bill Martin to form a successful songwriting partnership: Bill wrote the words; Phil wrote the music. In the 80s he began to produce instrumental albums many of which became big hits. For several years he was associated with Celtic Thunder and he wrote many songs for this group. Another of Phil’s songs is called Scorn Not His Simplicity which he wrote for his first son who was born with Down’s Syndrome and died at the age of four. Luke Kelly and The Dubliners were the first to sing the song way back in 1970 and many others have sung it since over the years including Sinead O’Connor. Here is Sinead’s version of the song:

3 Responses to Ireland 2019: The Rest of the Ulster Museum