Posted on October 14, 2019 by crowcanyonjournal

Can you think of a better anti-establishment symbol than Banksy, the anonymous street artist who has spread his satirical message on walls throughout the world? How about a better pro-establishment symbol in Northern Ireland than the splendid but stuffy Culloden Estate and Spa in Cultra? Would you be surprised to see some of Banksy’s famous prints proudly displayed on the walls of one of the Culloden’s classic lounges? We were.

Banksy has made a fortune selling his prints and paintings at auction houses.

Banksy came onto the graffiti scene in Bristol in the early 90s. He was an admirer of Blel le Rat in those days and he often teamed up with another artist who would gain some renown in the street art world known as Inkie.

One of several Banksy prints we came across when we visited the Culloden after having dinner at the Holywood Golf Club with Henry and Geraldine and some of their friends and family.

Around the turn of the century Banksy moved to London and in the last two decades he has left his mark in places such as Australia, Canada, Jamaica and Israel. He became an Internet sensation several years ago when some of his art appeared on the Bethlehem wall in Palestine. He spent a month in New York City a few years ago and left his stenciled mark all over that city.

One of Banksy’s latest masterpieces depicts chimpanzees taking over the British House of Commons. See the Guardian article here for more info on this painting and how much it is going for.

What’s the difference between copyright and trademark? Well, Banksy never sues for copyright infringement because doing so would also reveal his identity. So he concentrates on trademark violations instead. For more info on how Banksy tries to handle his trademark squabbles see here. 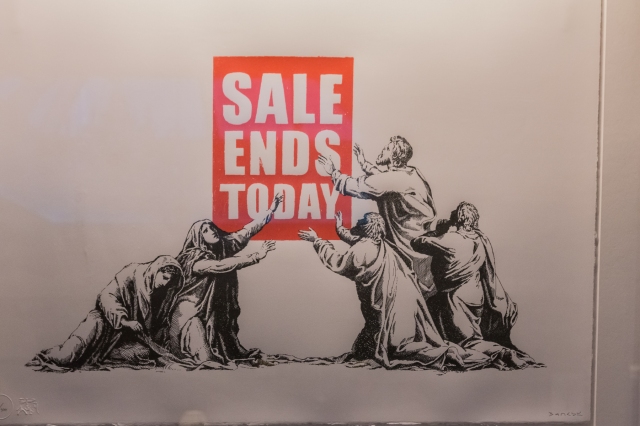 One reason for the Banksy mystique around the world is that he has managed to remain anonymous for all these years. Many people in the art world believe that he is a Bristol native named Robin Gunningham but this has never been proved. 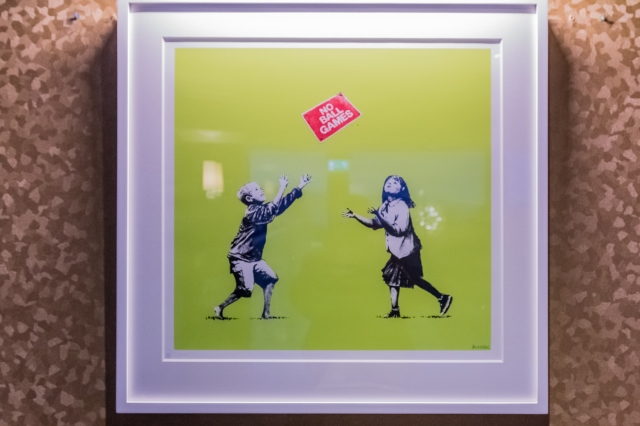 Banksy has received many tributes for his contribution to contemporary art. See here for an explanation of what has been called the “Banksy Effect.”

Banksy’s tribute to Andy Warhol. Some of Warhol’s art was on display at the Culloden, too.

This is my fourth and final posting covering our experiences during our last day in Belfast. It was a fantastic week and we are glad that we were able to share our adventures with our daughter and her family and introduce them to Northern Ireland. What made this week a special treat was the opportunity we had to spend so much quality time with cousin Henry and his wife Geraldine and their friends and families.

In my next post I will write about our adventures traveling from Belfast to Galway via Dublin.

As we say farewell to Belfast let’s listen to a song by a Northern Irelander named Tommy Makem. Tommy was born in Keady, County Armagh in 1932. He teamed up with the Clancy Brothers in the 60s and went on his own in the 70s and teamed up again with Liam Clancy in the 80s only to go solo again a few years later. He died in Dover, New Hampshire in 2007.

In this song Tommy asks the age-old question: Is it true that a woman is worse than a man? Listen to the song and find out.

2 Responses to Ireland 2019: Banksy’s Street Art at the Culloden