Posted on November 1, 2019 by crowcanyonjournal

Eyre Square (Irish: An Fhaiche Mhór) is in the center of Galway and was the center of all of our activities during our seven-day stay in Galway last June. We stayed at the Eyre Square Townhouse two blocks west of the square on Eyre Street and every day we walked to and through the square to get to whatever our destination was that day.

Banners of the Fourteen Tribes that once ruled medieval Galway hang proudly over Eyre Square in central Galway.

Eyre Square was originally the piece of green found in front of one of Galway’s gates. The square was officially established in 1710 by Mayor Edward Eyre.

The most popular area of the square is its northwest side where you will find the flags of the fourteen tribes that once ruled Galway, the Browne Doorway and the Quincentennial Fountain with its Galway Hooker sails. The Bank of Ireland is across the street just south of Eyre Street.

We found a playground and the John F Kennedy Memorial on the northeast side of the square. Across the street are a number of shops and pubs including Fibber McGee’s and O’Connell’s Bar.

Forster Street starts on the square’s east point and goes up the hill parallel to Prospect Hill. The Galway Tourist Information Centre is a few doors up Forster Street and where we purchased most of our tour tickets. The Galway Coach Station is two blocks up Forster and then a quick right on Fairgreen Road. This is where we arrived in and departed from Galway and also where we boarded our tour buses to the Cliffs of Moher and Connemara.

The Hotel Meyrick dominates the area across from the square’s southeast side. We had dinner at the Gaslight Brasserie inside the hotel one evening. General Meyrick built a stone wall around the square in 1801 and the square was known for awhile as Meyrick Square. Behind the hotel are Galway’s train station (Ceannt Station) and bus depot (Bus Eireann). We boarded the local bus to Knock one day at this bus station.

Victoria Place starts at the square’s southern point. We found the bus stop for the shuttle that would take us to the Aran Islands Ferry by walking down Victoria Place a couple of blocks to Queen Street. The bus stop is just past the United Methodist and Presbyterian Church.

A number of restaurants and shops including the Skeff Bar, Café Express, Caffe Nero and the Eyre Square Shopping Centre line the street opposite the square’s southwest side. 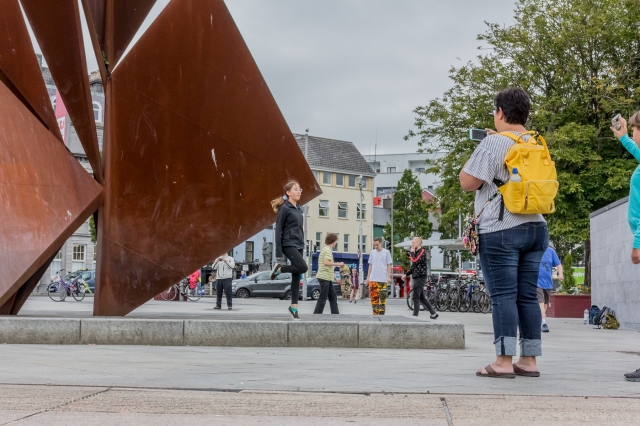 Sophie dancing by the Galway Hooker sculpture on northwest side of Eyre Square. The Hooker sails were designed by Eamonn O’Doherty in 1984 as part of a fountain commemorating the quincentennial anniversary of the incorporation of Galway as a borough with mayoral status.

When I first heard the term I thought someone was talking about a local woman with rather loose morals and I began to wonder when I noticed lots of girls wearing t-shirts saying Galway Hooker. Then I discovered that local fisherman all used these boats called Galway Hookers and this sculpture made of corroded sheets of iron represent the sails on these boats. Galway Hooker is also the name of a popular local beer.

My granddaughter Sophie decided to make a video of herself dancing through Galway. She was the director, editor, choreographer and star performer of her video and she recruited her Mom to be videographer and her sister to be sound technician. The video starts out with her dancing in Eyre Square and continues in other parts of Galway and on our bus tours of the Aran Islands and Connemara.

The Browne Doorway amid the Fourteen Tribe banners on northwest side of Eyre Square.

The Browne family was one of fourteen merchant families who controlled Galway for more than 500 years. They built their mansion on Lower Abbeygate Street in 1627. The doorway was salvaged and moved to Eyre Square in 1905 as a reminder “of opulent times.” Go back for a moment to my first photo above. The orange flag (sixth from the left) is that of the Browne family. 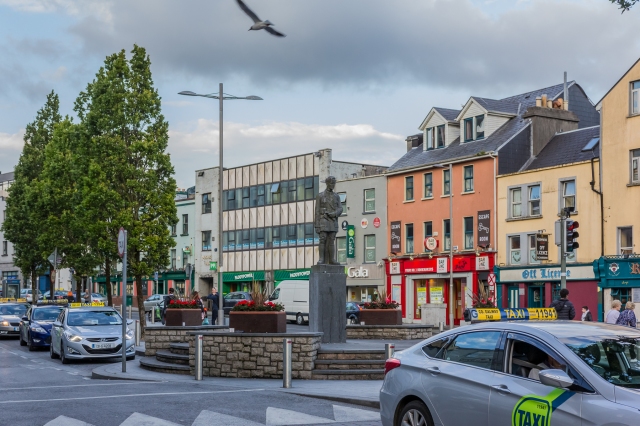 Liam Mellows memorial at the base of Prospect Hill on north point of Eyre Square and near end of Eyre Street.

We walked up Prospect Hill only twice during our week in Galway: once to drop off our dirty clothes at a laundry and then the next day to pick up our clean laundry. Our clothes were ready by the same evening but the laundry closed at 7:00pm and we did not get back from our Aran Islands tour in time. I’ll have more about our Aran Islands tour in a future post.

Mellows was a member of the Irish Republican Brotherhood and a Sinn Fein politician. He was a hero of both the Easter Uprising and the War of Independence from England but then took the side of anti-treaty forces in the horrible Irish Civil War that followed the Irish victory and was executed by pro-treaty forces in 1922.

Lawn on northwest side of square. 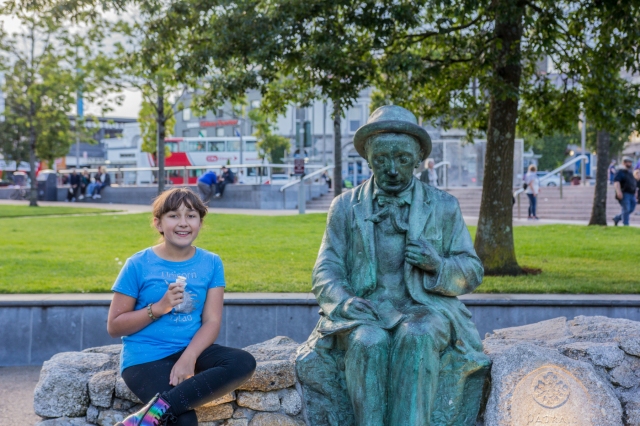 Claire and friend. Padraic O’Conaire was a prolific short story writer who wrote in the Irish language.

Sophie and Claire found a playground in the square. 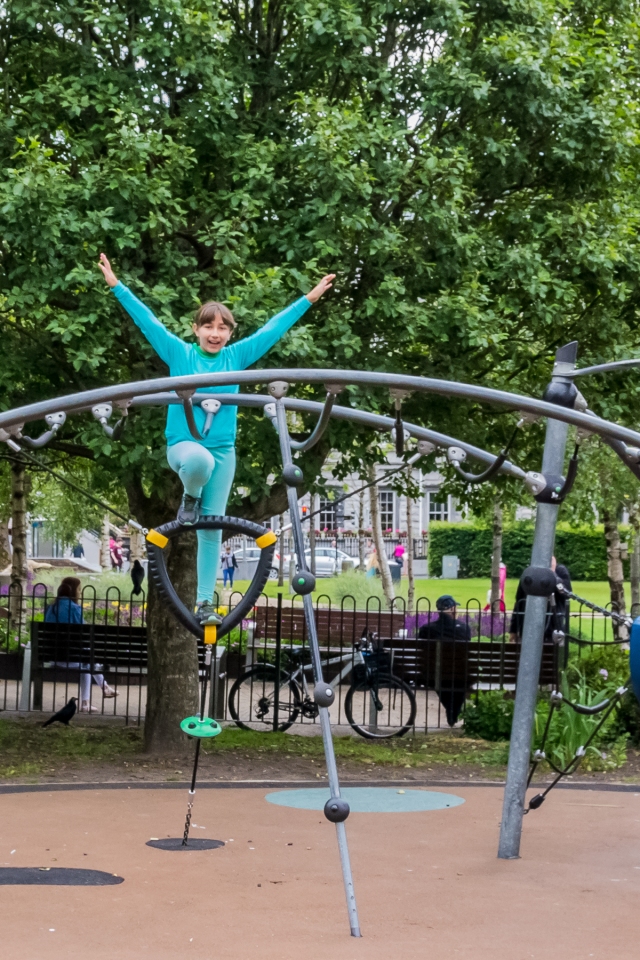 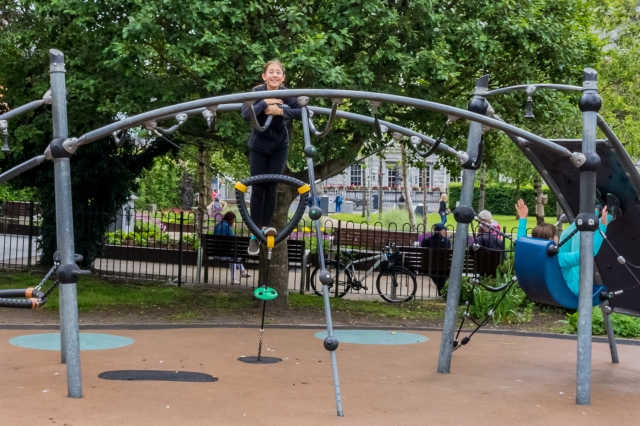 So does her sister. 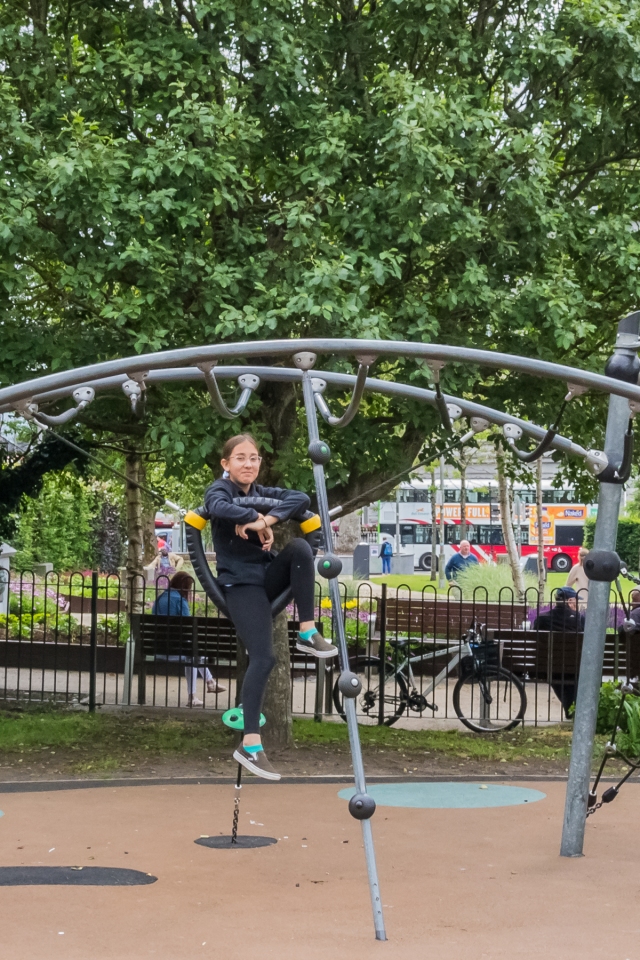 Bird-watching info on fence near playground. 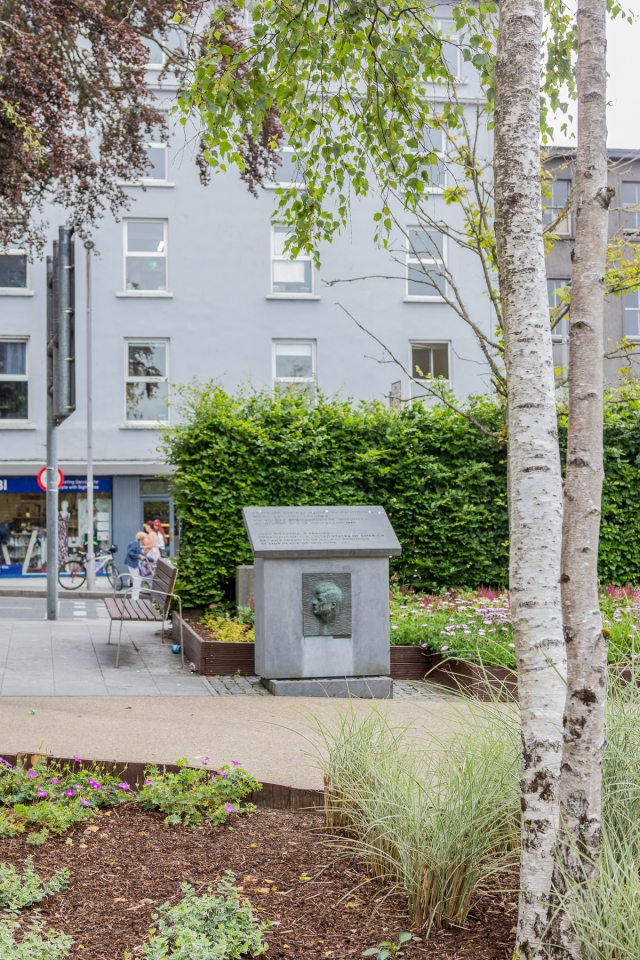 President Kennedy Memorial on northeast side of Eyre Square. 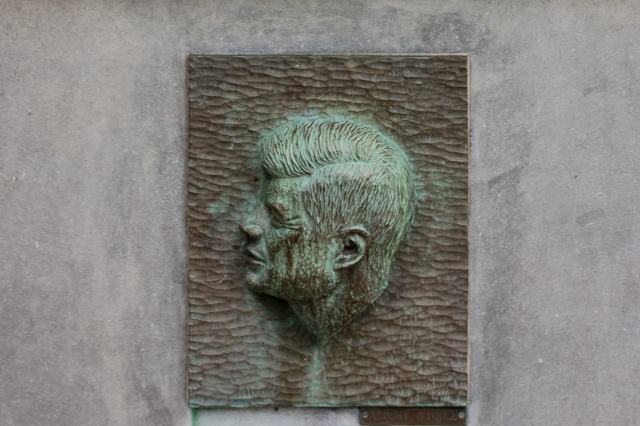 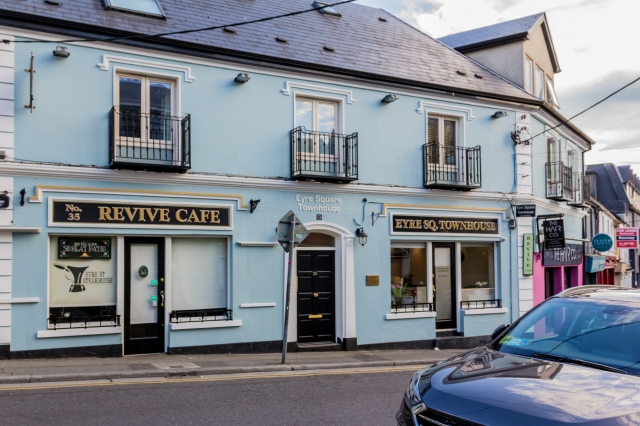 Where we stayed during our week in Galway. The Eyre Square Townhouse is actually a couple of blocks from the square. The hotel owners also run the café next door. We were given breakfast coupons for four of the seven days.

Café across the street from our hotel. That critter on top of the car was probably one of the gulls who began shrieking every morning at 4:00am!

This building is on the corner of Woodquay Street and Eyre Street and is across the street from McSwiggan’s restaurant where we dined on our first evening in Galway. There is something about the wall that I find intriguing! This building is about three blocks from Eyre Square.

Galway’s main tourist area is a pedestrianised street that starts at the west point of Eyre Square and runs downhill all the way to the water’s edge. It’s actually five streets because the name changes every couple of blocks. We will focus on our walks up and down this street (these streets) in my next post.

There are two popular songs called Galway Bay. One is the Arthur Colahan song popularized by Bing Crosby in 1947. We heard Tommy Fleming’s version of this song in my previous post (see here). The other song was written by Frank A Fahy more than 100 years ago and was originally sung in the sean-nos (Irish for “old-style”) manner without any accompaniment. Then Dolores Keane began singing the song backed up by De Danann, the musical group she co-founded in 1975. Dolores sang with De Danann off and on for about 25 years and also dabbled in acting on the Dublin stage. Dolores was born in a tiny village near Tuam, County Galway, in 1953 and she recorded her first song in 1958 at the age of five. She has been called “the queen of the soul of Ireland.” Here is her rendition of Galway Bay:

That was Frankie Gavin, another co-founder of De Danann, on the flute. He also plays the tin whistle and the viola but can be heard most often playing the fiddle.