Posted on December 6, 2019 by crowcanyonjournal

It was our third day in Galway and the first of several days that we devoted to all day bus tours of areas nearby. On this day we decided to visit the Cliffs of Moher and other sites in County Clare south of Galway. Tourists have many types of tours and local tour companies to chose from and we checked out a few of these and decided on Healy Tours. As it turned out, the only people who purchased tour tickets for that day were the ten members of my family and so we piled into one of their Mercedes mini buses and Patrick, our driver and tour guide, headed south to County Clare. We were on our own private tour!

Our group of ten were the only ones who signed up for the tour this day and so Healy supplied this smaller mini-bus instead of their normal-sized bus. And so we had our own private tour! It cost us a total of 210 euros for our all-day trip. 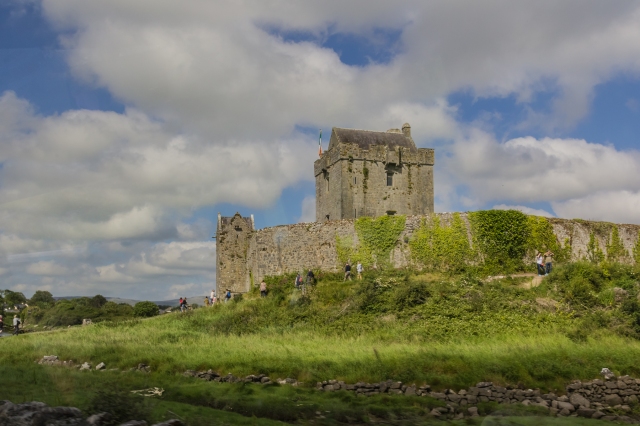 I managed to get just this one shot as we drove past Dunguaire Castle. I was told not to worry. We will be stopping for about a half hour on the way back and I will be able to take a lot of pictures then.

We drove along the south side of Galway Bay for awhile before heading south to The Burren and County Clare.

Our first stop on our tour was at Aillwee Cave. Yes, it was very dark! The cave and this sign were featured in an episode of the popular British sitcom Father Ted several years ago.

“Aillwee” comes from an Irish word meaning “yellow cliffs.” Occasional lights allowed us to see the walls and the stalagmites and stalactites. Otherwise it was pretty dark and most of my photos did not turn out.

Aillwee Cave was created from glacial melt thousands of years ago and is one of the oldest caves in Ireland. About ten thousand and four hundred years ago an old bear crawled into the cave and died. His skull was discovered in 1976 and radio carboned last year. There were only about a thousand people living in Ireland at that time when the bear died. 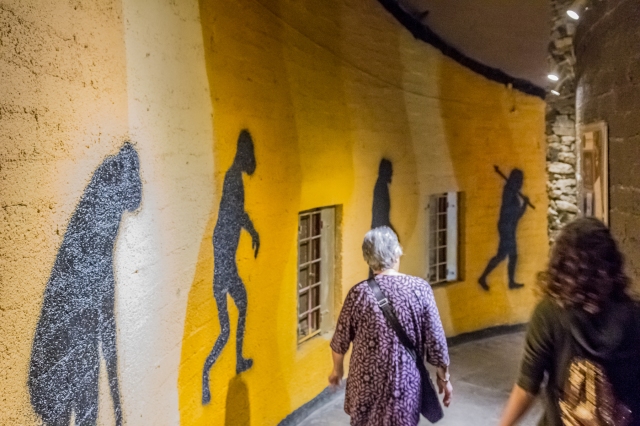 Accompanied by ancient cave dwellers, we exited the cave via a tunnel that brought us back to the cave entrance. 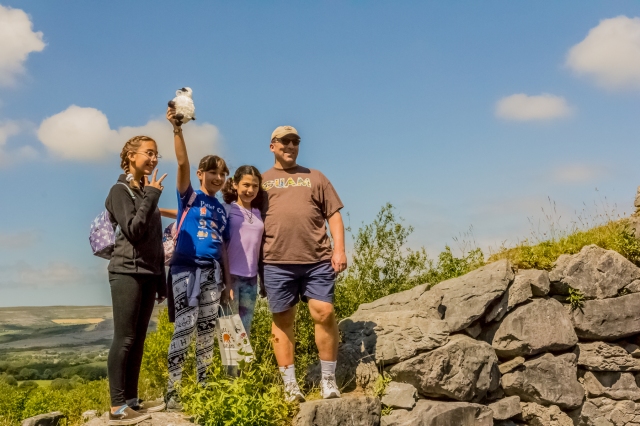 Some of us climbed a rocky hill near the cave to see The Burren.

The Aillwee Cave is privately owned but partners with the UNESCO Burren and Cliffs of Moher National Geopark.

We drove trough The Burren past the famous Poulnabrone Dolmen on our way to the Cliffs of Moher.

“Poulnabrone” means “the hole of the sorrows. This Neolithic tomb was excavated in 1985. The remains of a half dozen children and around twenty adults were discovered. Most of the adults were under thirty when they died.  Only one was over 40. 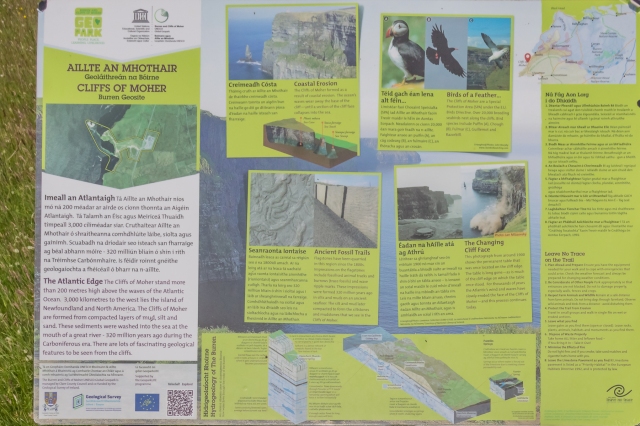 Some helpful information about the cliffs.

Can you guess what is the most popular tourist attraction in western Ireland? 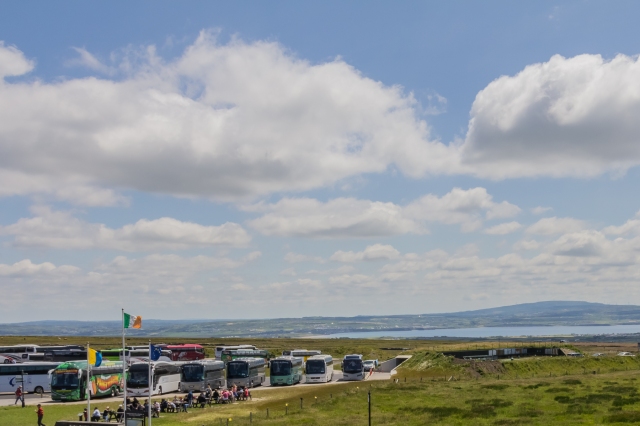 There is no charge for looking at the cliffs. You have to pay for parking, though.  The Visitor Center charges an admission fee which includes parking — 8 euros for adults, 7 for students and 5 for seniors, children under 16 are free. There is a discount if you purchase your tickets online between the hours of 11 and 4.

Looking south at the end of the path that starts at the parking lot and continues past the visitor’s center. The cliffs stretch for about five miles.

Some people prefer to view the cliffs from the sea. Some of these tours also include the Aran Islands. Several of these tour boats depart from Doolin Pier about ten minutes north of the cliffs.

Cornelius O’Brien built his tower in 1835 and began to charge admission fee for tourists to see the view from the top of his tower. Two years later he became Clare’s representative in Parliament, a position that he held for the next twenty years. The tower was restored in the 1960s and tourists today can pay a 4 euro admission fee and climb to the top and wonder at the view. The view from the steps leading to the tower was good enough for us.

My older daughter and her family enjoyed the view.

Remember the weekly Monochrome Madness challenges hosted by Leanne Cole? I used this Nik Silver Efex Pro preset for many of my submissions.

My three granddaughters in front of O’Brien’s Tower.

My younger daughter and her family also enjoyed the view. 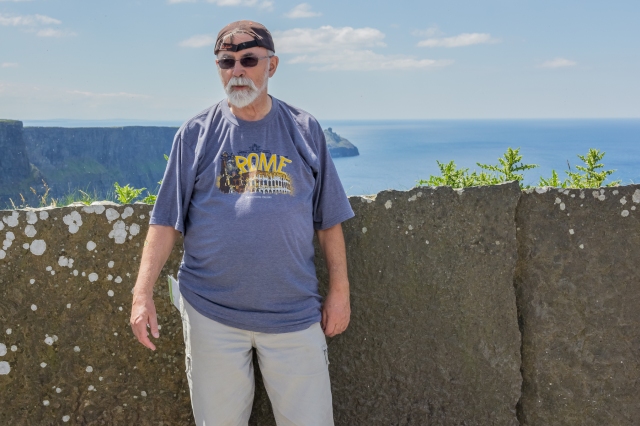 It was a very windy day — hence the backwards cap.

Another view of O’Brien’s Tower. The Cliffs of Moher rise to their highest point above sea level — 702 feet — just north of the tower.

Looking north from a point near O’Brien’s Tower.

We were allowed to linger along the cliffs for an hour and a half. After walking as far as O’Brien’s Tower some of us retraced our steps to the Visitor Centre where we spent the rest of our time. Others hiked further south and were rewarded by being able to view a number of puffins nesting in the cliffs. There are about twenty other species of birds in the area.

The Visitor Centre was built in 2007. The plan then was to be able to accommodate an estimated 400,000 annual visitors. But the number of visitors has increased to way over a million a year and we found the place overcrowded with long lines. The centre offers a gift shop and a café and rest rooms plus an audio-visual presentation that allows you to see what the cliffs look like on a sunny day if you happened to visit on a bad weather day.

It was about a ten minute drive to the village of Doolin where we had a delicious lunch at Fitzpatrick’s Bar. We were allotted 45 minutes for lunch and I didn’t think this would be enough when we noticed all the buses parked outside and the long lines inside. But to our surprise the double line at the carvery moved rapidly and several outdoor table seats opened up when a group left to board their bus. The meal at the carvery included your choice of turkey or beef plus potatoes and vegetable.

Time for a hike. Those are the Aran Islands on the horizon.

Ater lunch we drove to a place called Burren Walk Parking Spot and were given 2o minutes to explore. During our brief stay we noticed several buses come by and unload their passengers. It must be a conspiracy!

We took the shoreline road back to Galway.

The water meets the land near Dunguaire Castle.

Our last stop for the day was at Dunguaire Castle on the southern end of Galway Bay near the village of Kinvara. I will show you several photos of the castle in my next post.

Irish Music Bonus — The Cliffs of Dooneen by Planxty

Since we spent most of the day in County Clare I thought I would include a Clare song, perhaps one on the Cliffs of Moher, but the best I could find was this beautiful ballad made famous by the legendary Irish trad band Planxty. Donal Lunny, Andy Irvine, Liam O’Flynn and Christy Moore formed Planxty in the 60s. Moore left in 1975 to go on his own and the group officially disbanded in 1983 but have joined up again here and there over the years. This video clip is from their reunion at Dublin’s Vicar Street theater in 2004.

Liam O’Flynn was a master on the uilleann pipes. He also played the tin whistle. Donal Lunny plays the left handed guitar and the bouzouki. Andy Irvine plays the guitar, bouzouki and harmonica and also has a wonderful voice. Christy Moore is the main singer of this song but wait till you hear Liam break in with his pipes!

Liam died last year but the other three, all in their 70s, are still going strong. Sometimes they perform together (both Donal and Christy were members of Moving Hearts for awhile) or with other groups or just solo. Christy Moore, in fact, is playing ten shows at Vicar Street over the next two months. But don’t bother to jump in a plane just yet. All ten shows are sold out!

The cliffs of Dooneen are actually in County Kerry across the Shannon from County Clare and you really can see the towns of Kilrush and Kilkee from the cliffs.

So without further adieux here are Christy and Liam and The Cliffs of Dooneen:

7 Responses to Ireland 2019: The Cliffs of Moher