Posted on February 27, 2020 by crowcanyonjournal

And so it goes. I decide to believe the Connemara Man as we drive 16 kilometers up the N59 road from Kylemore Abbey to Killary Harbour, also known as Killary Fjord.
It’s our second stop on our day-long tour of Connemara. 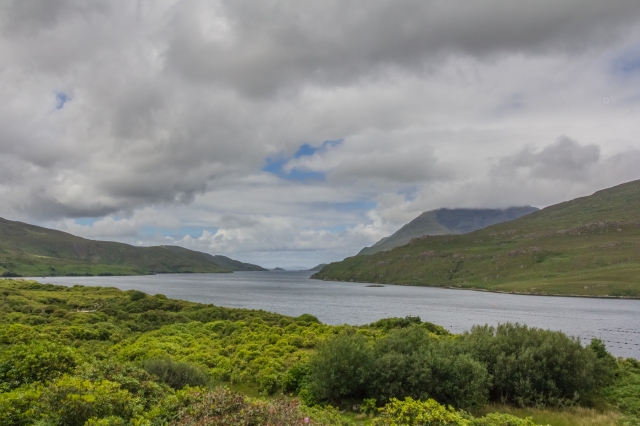 Killary Harbour marks the northern boundary of the region in County Galway that is known as Connemara. 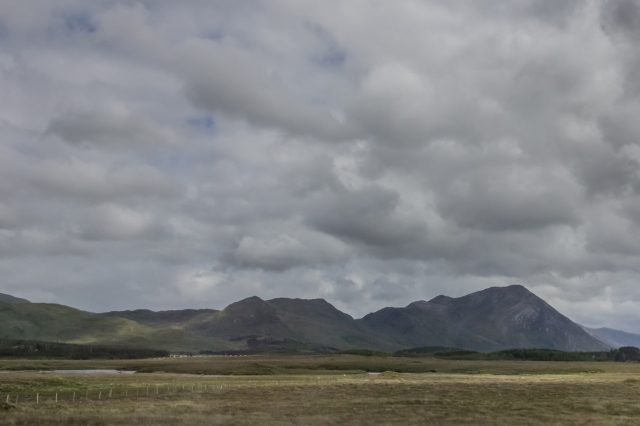 Scene between Kylemore and Killary. These hills are on the north side of the fjord in County Mayo.

The hills of Connemara and Mayo reminded me a lot of our trip through the Scottish Highlands to the Isle of Skye in 2016 (see here, here,  here, and here. 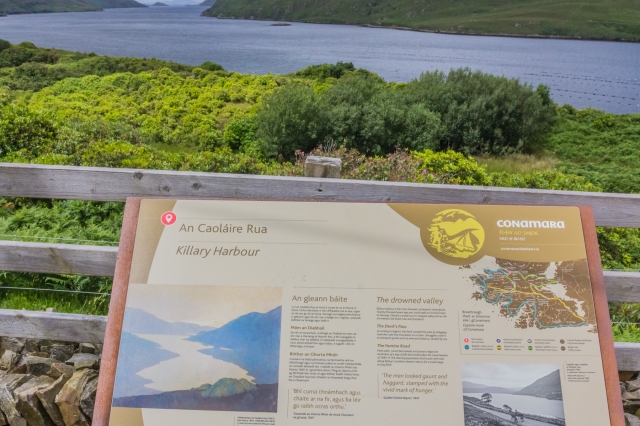 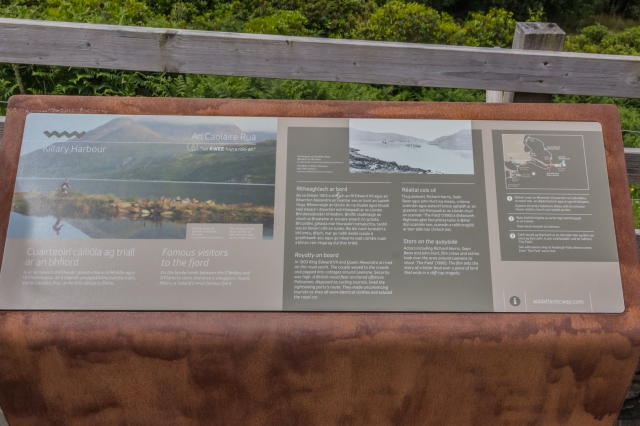 More info on the fjord. 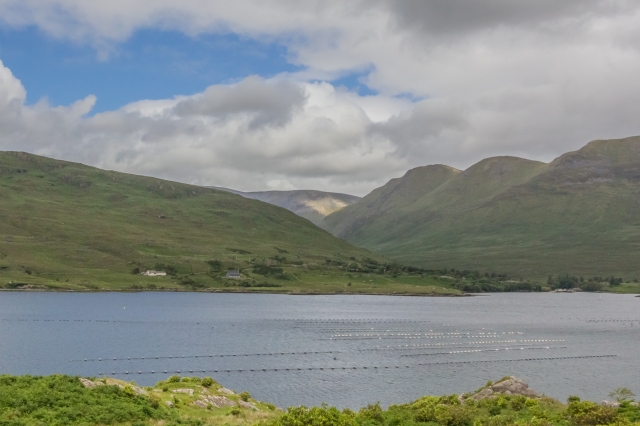 Mussel Farming on the fjord. Killary Harbour is also famous for its salmon fishing. 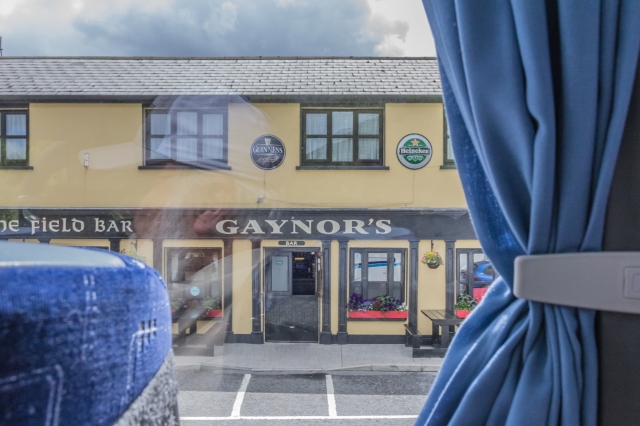 Gaynor’s Bar in Leenane is also known as The Field Bar.

The tiny village of Leenane (aka Leenaun) sits 16 kilometers up from the mouth of the fjord that forms the northern border of Connemara. I believe it took about 37 seconds to pass the town.  The only shot I got was this one of Gaynor’s Bar which is also known as The Field Bar ever since Jim Sheridan came to town to film his second of two masterpieces, The Field, in 1989.  Jim both wrote and directed The Field which is based on the 1965 play by John B Keane. The film came out in 1990 and starred Richard Harris, Sean Bean, Brenda Fricker and John Hurt. Harris received an Oscar nomination for his role. Sheridan’s other masterpiece was My Left Foot which starred Daniel Day Lewis. Brenda Fricker held down the female lead in that movie, too. Lewis won the Oscar for Best Actor in 1989 for his role and Brenda Fricker won Best Supporting Actress. 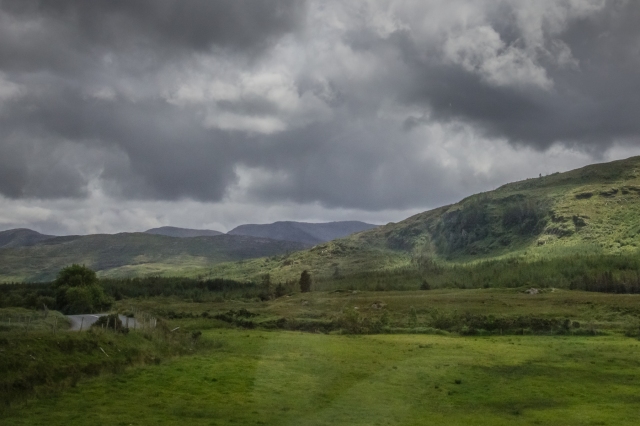 On our way to Lough Nafooey.

Lough Nafooey is on the Mayo-Galway border about 11 kilometers southeast of Leenane.  We were surprised when our driver told us that we could hop off the bus and walk down the hill from the overlook on road L1301 and he would meet us at the bottom. 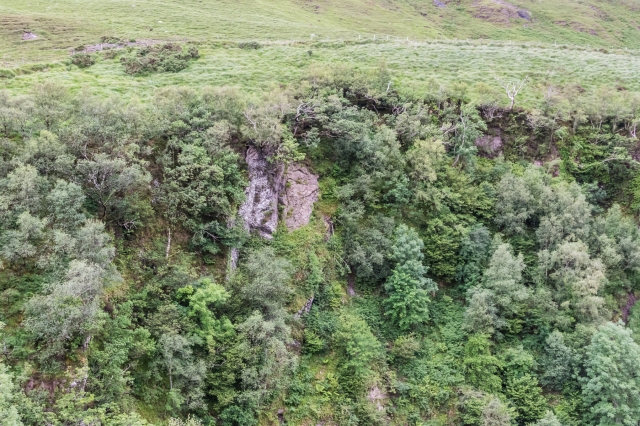 Steep wooded ravine at the top of the hill near the start of our hike.

Lough Nafooey is also known as Loch Na Fooey which means grave-shaped lake. Some people believe that the name comes from Loch na Fuaiche which means Lake of the Winnowing Winds. The lake is acclaimed by fishermen for its pike and wild brown trout. 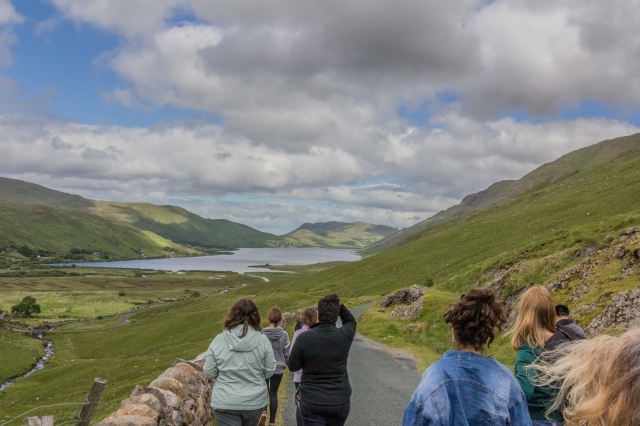 We walked down the hill overlooking Lough Nafooey. 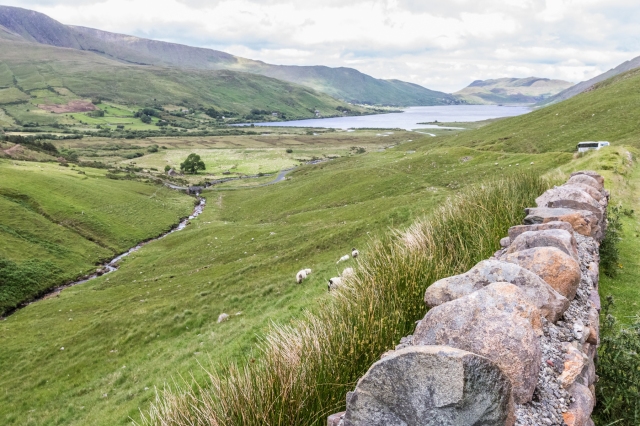 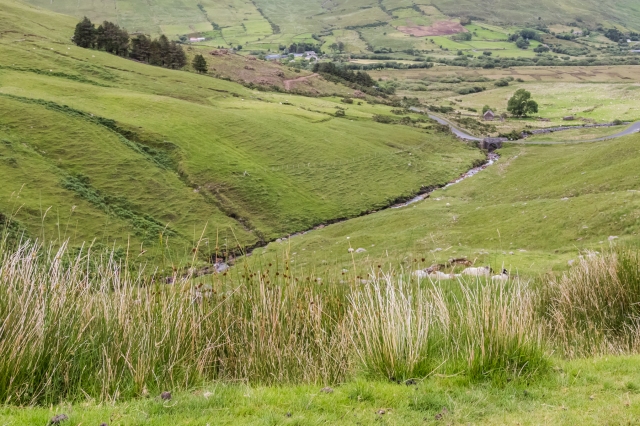 The sheep were sitting serenely until we walked by. 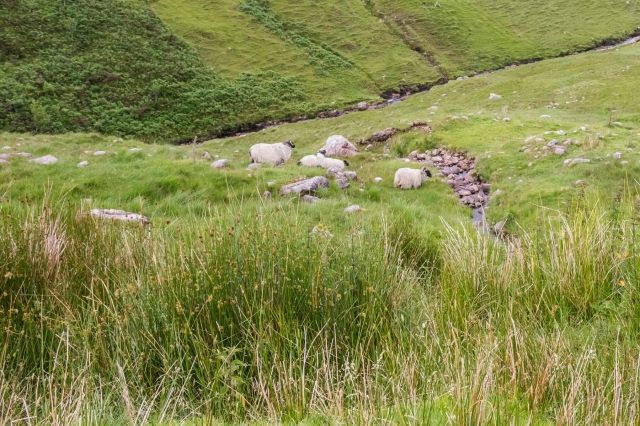 Then they got up and stretched. 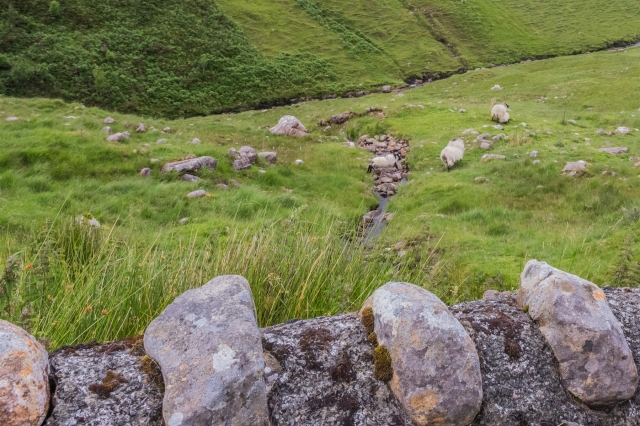 And some of the sheep decided to race us down the hill. 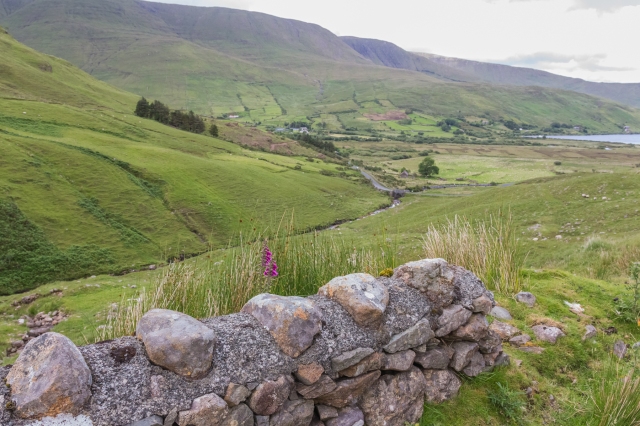 We’re halfway down the hill by now. 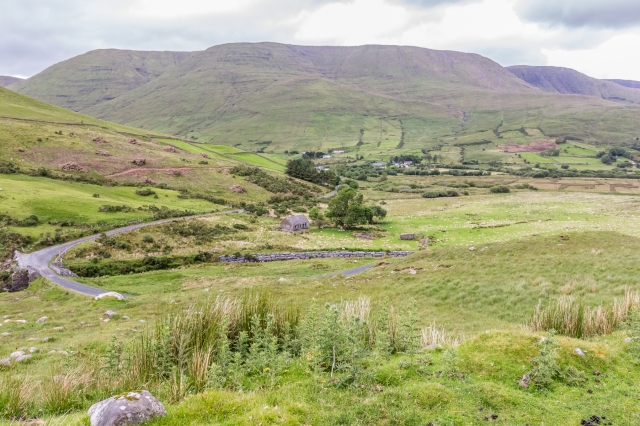 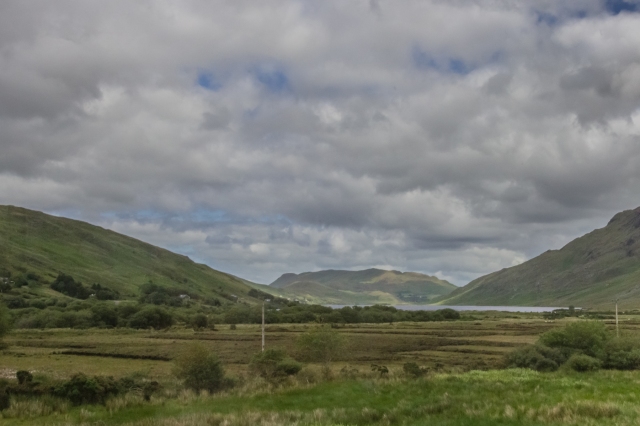 One last look at Lough Nafooey. 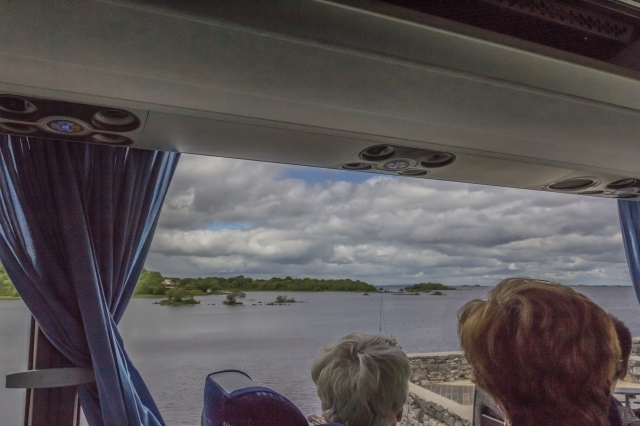 Passing Lough Mask on our way to Cong.

It’s about 23 kilometers from Lough Nafooey to the village of Cong and we straddled the border between Galway and Mayo all the way. The main scenery in this stretch of our trip was Lough Mask (also known as Loch Measca), the fourth largest lake in the Republic of Ireland. The World Cup Trout fly fishing Championship is held annually on Lough Mask.

Our next stop was the village of Cong in County Mayo just outside the Galway line. You can find out all about it in my next post: Connemara, Part Three.

Folklorist and song writer Sean McCarthy (1923-1990)  wrote this song about building poteen stills in the hills. Mattie Lennon’s play about the life of McCarthy is called And All His Songs Were Sad. Well, maybe all but this one!

Johnny McEvoy has been singing for decades and is about my age. So I guess this video clip is pretty old.

* The English words “fjord” and “fjard” both come from the same word in Norwegian that generally means a sailable waterway. Here’s what Wikipedia has to say about the difference between the two words:

“Although fjards and fjords are similar in that they are a glacially-formed topography, they still differ in some key ways:
Fjords are characterized by steep high relief cliffs carved by glacial activity and often have split or branching channels.
Fjards are a glacial depression or valley that has much lower relief than a fjord. Fjards fill with eroded local materials which assists “filling” along with rising sea level since the last ice age contributing as well. Other low relief landforms that are only associated with fjards such as mud flats, salt marshes, and flood plains[1] further characterize the difference between fjords and fjards.”

So there you have it!