Posted on January 26, 2020 by crowcanyonjournal

After visiting the Seven Churches on the west side of Inishmore our guide / driver turned around and headed back to the middle and narrowest portion of the island where we found a couple of shops and a café nestled between several beaches, some facing north and some facing south. The shops and café plus a few more buildings here and there make up a tiny village called Kilmurvey. 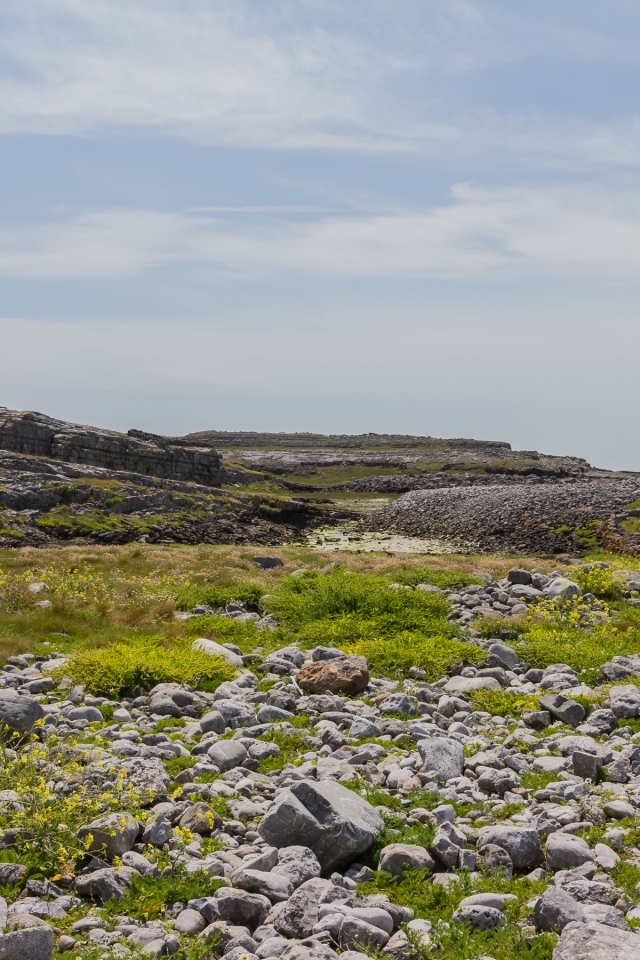 Inishmore scene. Some of the flora on the Aran Islands cannot be found anywhere else in Ireland. 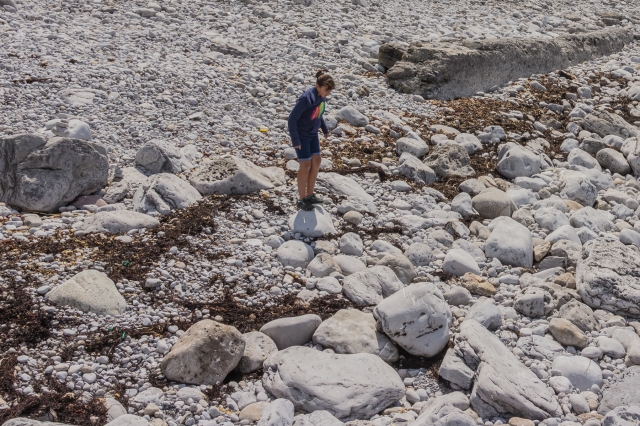 My granddaughter Claire checking out the beach.

My granddaughter Mia and her daddy also explored the beach.

Some family members get involved in rock skipping while others watch from the boat ramp. 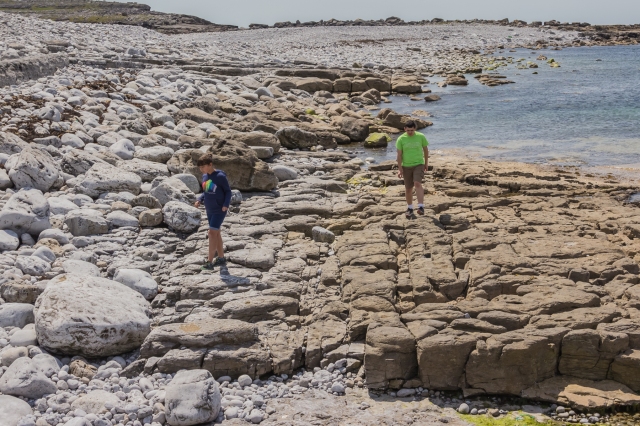 My grandson joins his cousin exploring the beach.

A typical Inishmore landscape: rocks, rock wall and weeds growing in the crevices.

Outdoor area between the café and craft shops for sitting, eating and relaxing. 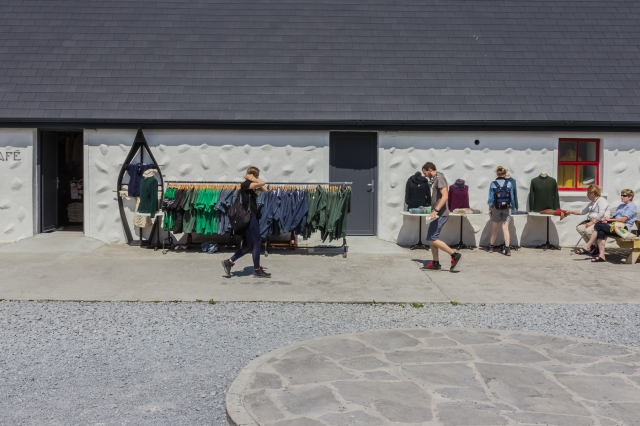 After lunch at Kilmurvey Village we split up. Some of us stayed and relaxed in the village and did some shopping while others hiked to Dun Aengus, one of several prehistoric stone forts on the island. The forts are all about two or three thousand years old and are situated on high elevations at the edge of steep cliffs and offer fantastic views. It’s a 30 minute hike up a rocky path from the visitor center to the fort.

My younger daughter went on the hike to Dun Aengus. The next four photos were taken by her on her cell phone. 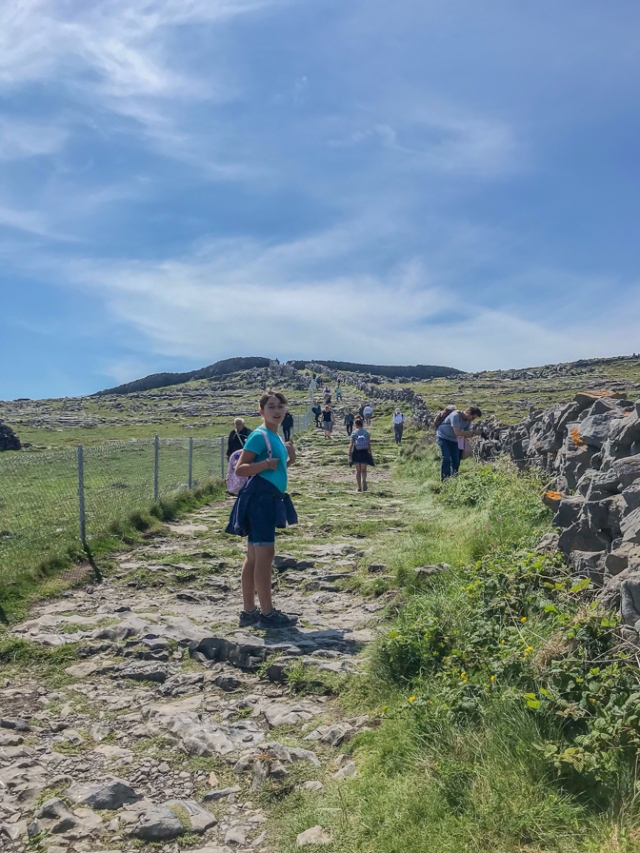 My granddaughter Claire on the rocky road to Dun Aengus. The Kilmurvey Craft Village is close to the start of this road.

The ancient rock fort was built on the edge of a 300-foot cliff.

The view from Dun Aengus. Millions of years ago the Aran Islands were part of the Burren in County Clare. The karst landscape consists of limestone slabs called clints. The cracks between the clints that allow water to seep through are called grikes.

The next two photos were taken by my son-in-law Brian on his cell phone while on the second hike of the day — to Inishmore’s famous Wormhole. 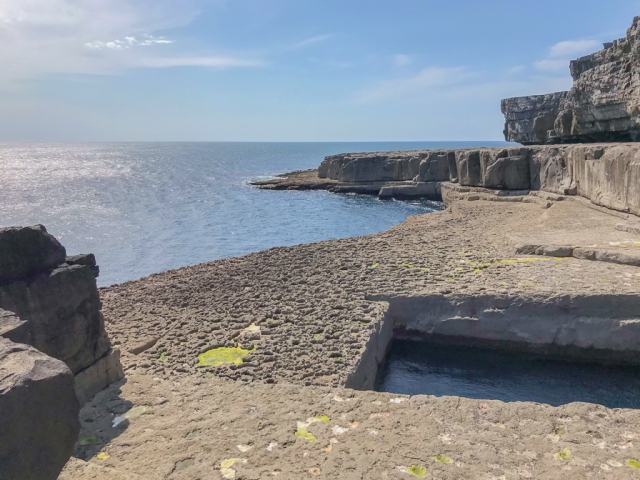 The Wormhole looks like it is man-made because it is almost a perfect rectangle. But it was built entirely by Mother Nature. Daredevils dive into the hole which connects to the ocean a few feet away.

There is no path or trail leading to the Wormhole. You have to wander among rocky fields searching for red arrows painted on rocks to show the way. One of my sons-in-law missed one of the arrows and got lost for awhile. But this story has a happy ending: he eventually was able to retrace his path, find the rock and rejoin his family.

All four of my grandkids completed the two Inishmore hikes.

The Wormhole is also known as The Serpent’s Lair and has been the site of the annual Red Bull Cliff diving contest (2012, 2014 and 2017) and more than 3000 people have come to these events. But on the day my family hiked there they were the only ones around.

Meanwhile, back at Kilmurvey. . .

This  building is not too far from the Village café and shops. 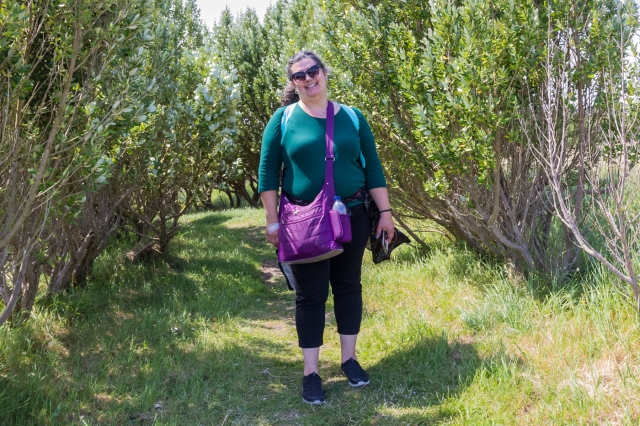 My daughter and I decided to take a five-minute walk to explore a nearby church ruins.

I think the path through the thickets to the church ruins was built by leprechauns, not meant for anyone who is more than four feet tall!

Info on Teampall Mac Duach. We are told to check out the figure of a horse carved into the stone in the northwest corner of the church.

Vegetation growing between the stones in the church wall. 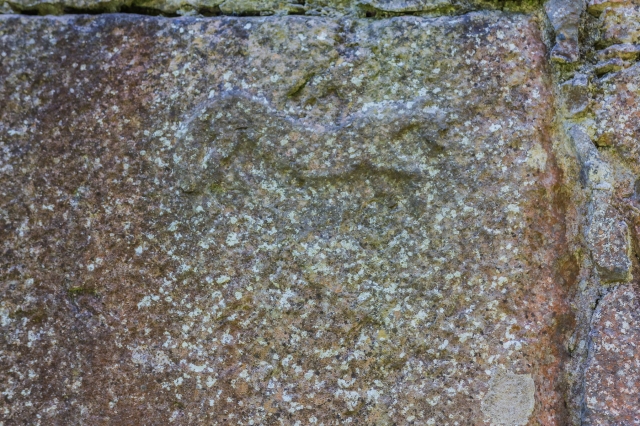 Here’s that horse. It took me awhile to find it. I think I was looking in the southeast corner instead of the northwest! 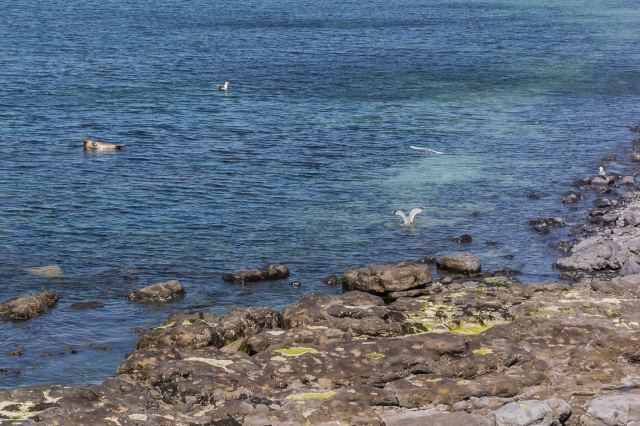 After Kilmurvey Rory drove us to Seal Beach. We saw several sea gulls and one seal.

My two daughters and that seal.

Rory took us back to Kilronan and then went back to pick up the hikers. He returned with the rest of the gang in about an hour.

Sculpture in front of the sweater market.

Another clothing store next door to the Aran Sweater Market. 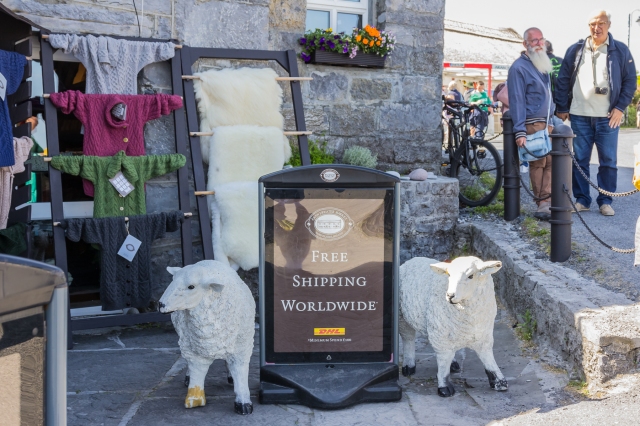 Outside the Aran Sweater Market.

Across the street from the Sweater Market is a bar called The Bar and an Irish Cross.

We took the last ferry back to Rossaveal and then took our time disembarking, which was a mistake. Our shuttle bus filled up rapidly and took off while we were still in line. We had to wait about an hour for another bus. We had planned to pick up our laundry that evening but our bus did not arrive back in Galway until after 7 o’clock and the laundry closed at 7.

I’m sure most followers of this blog realize how much we enjoy traveling. I also enjoy planning our trips and reading as much as I can about some of the special places we plan to visit or have recently visited. In my research on the Aran Islands one man’s name came up time and again: J M Synge, an Irish playwright who wrote extensively about the islands and its people during the first decade of the 20th century. In my next posting I will share with you some of the things I learned bout Synge including his strong attachment to the Aran Islands and the people he met there.

Most of the land in western Ireland is not condusive to farming. Huge boulders left over from glaciers during the last ice age still dominate many of the fields in Counties Mayo and Galway. And there is no natural soil at all in the Burren of County Clare and on the Aran Islands. A farmer there has to mix seaweed with sand to create his own soil so that he can grow his potatoes.

My ancestors hail from the fertile land of County Tipperary called the Golden Vale. After the Cromwellian conqust of Ireland in the 17th century most members of the clan were banished to the barren lands of County Clare and their Tipperary property was given to Cromwell’s officers. But they couldn’t handle the hard life in County Clare and within two or three generations most of them sneaked back to Tipperary to work as tenants on land they once owned.

There’s an old Irish song about the farming conditions being so bad in western Ireland that one farmer wishes he could join the British army rather than have to plough the Rocks of Bawn. Lets listen to Galway’s own Amon Folan’s renditon of the song.